We were fortunate enough to have Abby and Jack visit us again over Labor Day.  Last year we met them in Iceland and had a wonderful time despite *challenging* weather.  This time they chose to fly to Copenhagen and we were more than happy to also fly there!

With some extra hands (and new subjects) in a very cool new city, we took a lot of pictures so I'm going to let them tell most of the story for this trip.

This was the first time they met Natalie in person so they were much more excited to see her than Kristin or me!


Once we dropped our bags, we set out for a walking tour of some major sites.  Our first stop was Christiania, a self-proclaimed autonomous neighborhood in the middle of town that used to be a military base.  After the base was abandoned in the early 70s, people started moving in and, fueled by the worldwide hippie spirit, declared the place free.  Although there have been some bumps and threats along the way, it has remained mostly free to this day.  Residents have created their own local government and rules to live by, most notably being open to cannabis trade but taking a firm stance against hard drugs.  As expected, they (and their many many visitors) are also big on yoga, meditation, and an overall progressive lifestyle.  By some measures, it's actually the city's fourth largest tourist attraction. 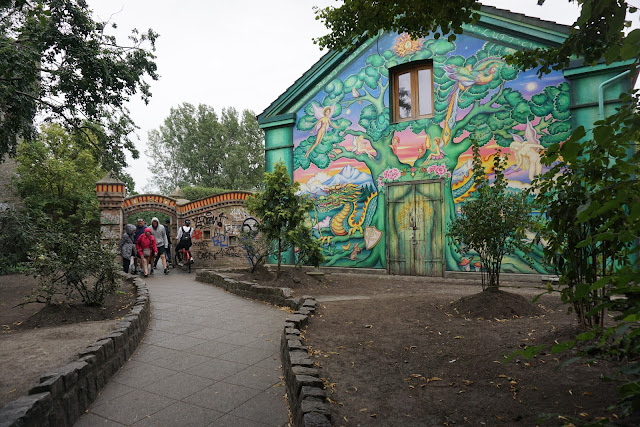 There are several cafes, bike shops, and art galleries within Christiania but we were just passing through, admiring the funky spirit and face lift given to a former barracks. 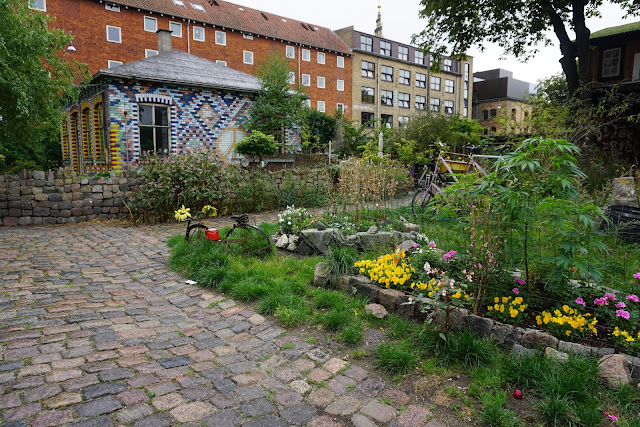 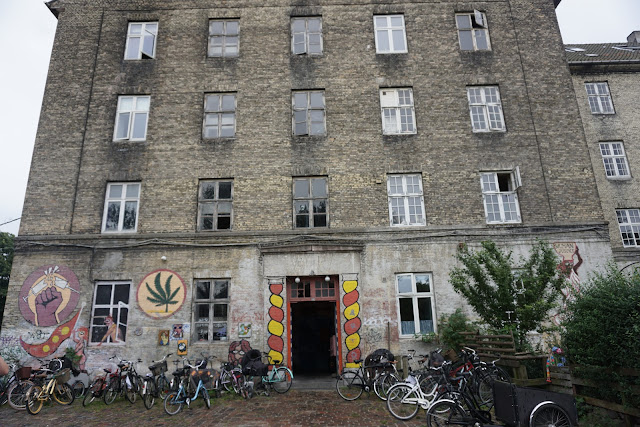 The next place we were anxious to see was called Copenhagen Street Food.  This was also a re-purposed area but with a little more polish.  In a former warehouse near the shipping docks,about 35 vendors are selling everything from burgers to basmati rice, BBQ to Brazilian, French to fish and chips and each stall has a totally unique design, setup, and theme. 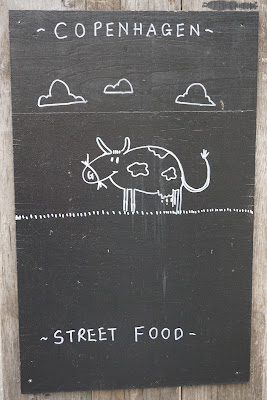 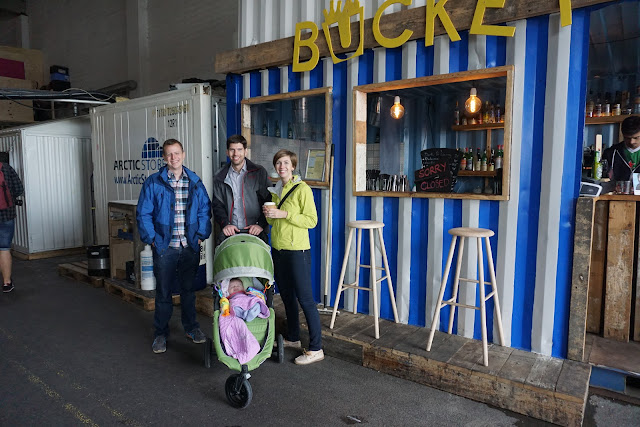 This visit was only for sightseeing and coffee but it was no surprise we returned *twice* for meals. 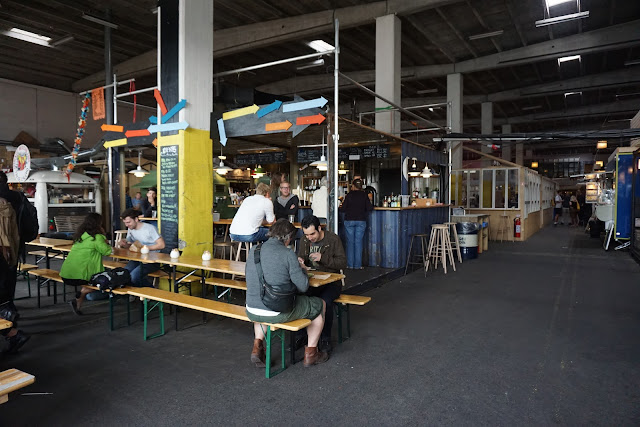 Like Amsterdam, the city has thrived because it exists not just next to the water but among the water.  Shipping and fishing are in its heart and downtown is crisscrossed with waterways.  Some boats are for fun while others are a full time home. 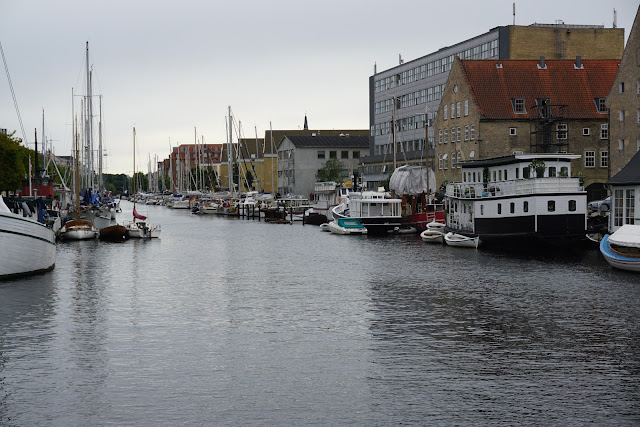 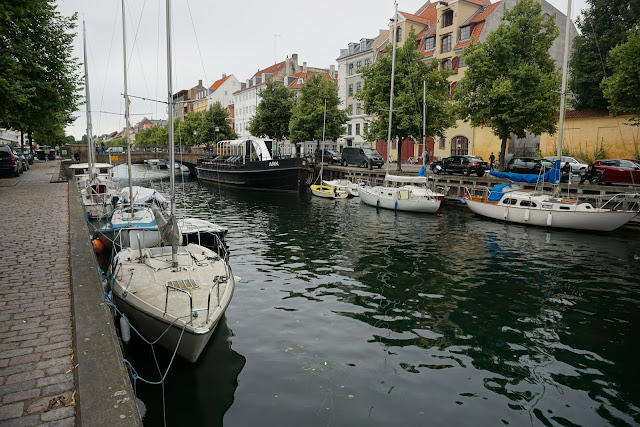 The next stop on the walk was Church of Our Saviour, a baroque church with a huge spiraling spire that you can climb all the way up.  Not knowing what she was getting into, Aunt Abby graciously offered to carry Natalie up the stairs for a little extra workout. 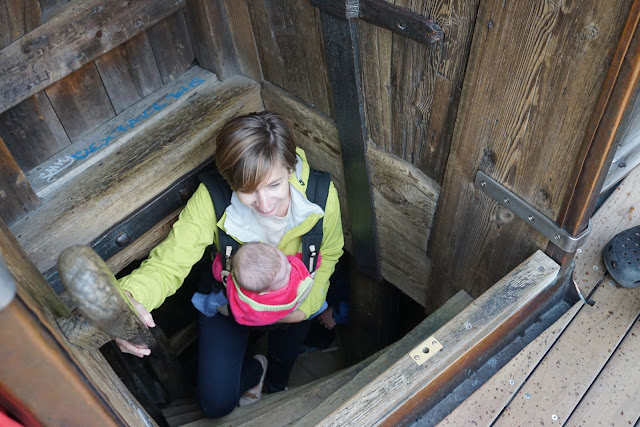 The staircases got steeper and steeper until finally the ladies emerged up the final ladder to a wonderful view of the city, only to wind around a few more times to the top. 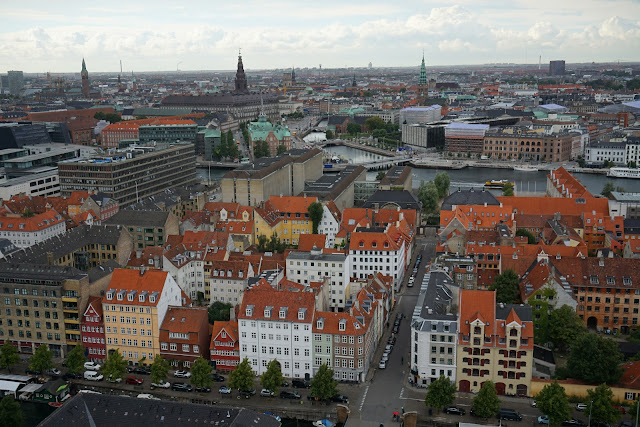 Walking around the top of the spire provided a wonderful view across the city, allowing us to see where we had been and where we were excited to still go.


Abby and I thought it would be fun to try a jogging tour of Copenhagen and we dragged our spouses along as well.  The next morning we woke up to a thunderstorm, so we were a little nervous, but by the time we met the guide the rain was gone.

Our first stop was to take the quintessential picture of Copenhagen at the end of Nyhavn (New Harbor).  The canal was built in the 1600s and quickly became the heart of the booming shipping and sailing industry. Which meant it had lots of bars and ladies of the night for the sailors and remained that way for quite some time. Copenhagen's shipping industry has waned and over the last 30 years this area has been transformed into a cute stretch of revitalized buildings, and the canal in front is home to lots of historic wooden ships. 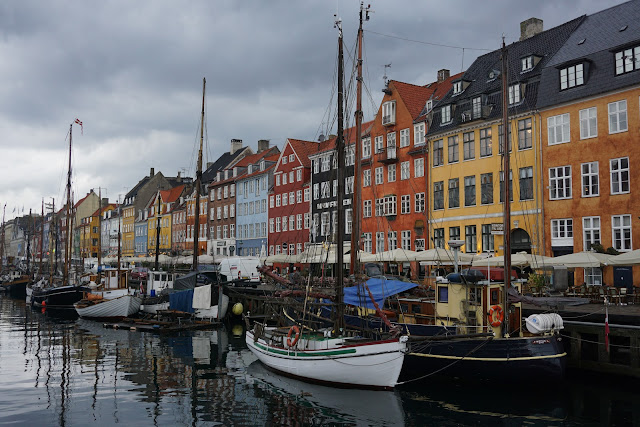 Arguably even more popular than Nyhavn is the Little Mermaid statue located just north of town along the canal.  A properly framed photograph can make it look like an amazing sculpture watching over the ships in the harbor while in reality it's more of a Mona Lisa...tiny and crowded with tourists.  Fortunately our  expectations were tempered and our guide was able to snap a quick shot of us before too many others got in the way. 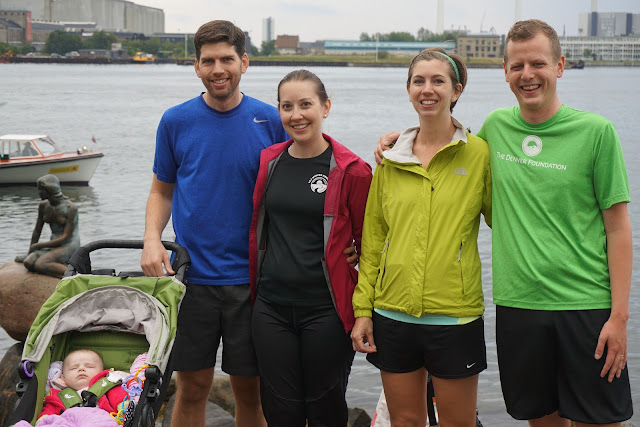 From there we headed west and ran around a cool star-shaped island that used to be a military fortress.  The guide said she often sees the Crown Prince of Denmark jogging the same trails but I think we had slept in too late to see him that morning.

We wound through a peaceful park and then stopped at Amalienborg, which is where the Danish royal family lives in the winter.  It consists of four identical palaces facing a courtyard with a big statue of King Frederick V in the middle.  After living in Washington, DC for a while and visiting several other European capitals, it was amazing to me that we were able to wave to the Crown Princess as she drove by.  Without a guide to tell us, we never would have suspected the lady in the Land Rover was such royalty! 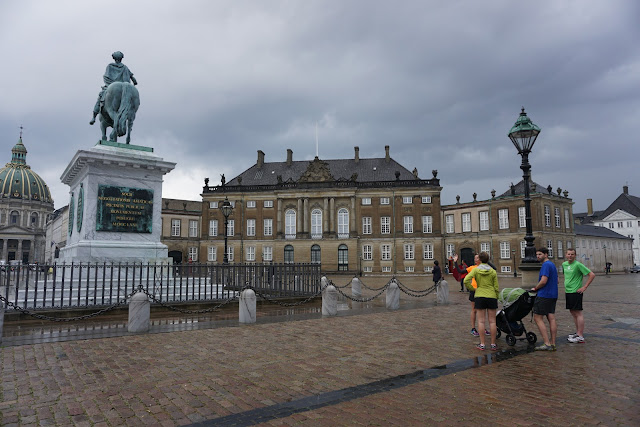 Continuing the royal tour, the next stop was Rosenborg Castle in a park just outside of downtown.  It was built in the 1600s as a summer home for the royals and now is a great museum full of historic artifacts.  At the advice of our guide, we came back and toured it the next day. 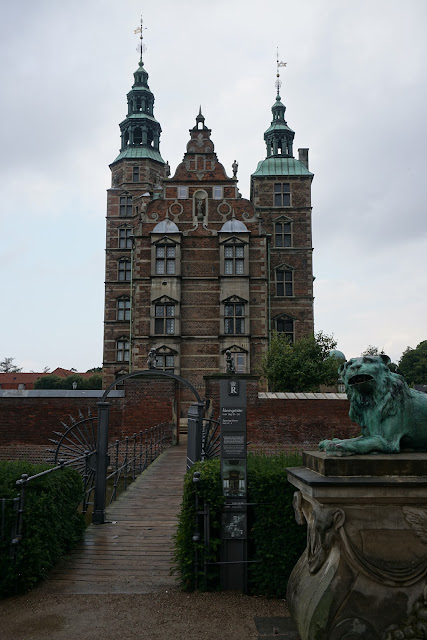 Everyone had a great time on the running tour and it was a fun way to see a lot of highlights in only a couple of hours.  Personally I also always having a guide at the beginning of my trip to not only explain the things in front of us but discuss other suggestions while we're in the area.  Lena was a wonderful guide, was happy to accommodate Natalie in the stroller, and I would recommend it to anyone visiting the city.

After a warm shower and fresh clothes, we were all getting hungry and headed to a cafe that our guide had recommended along the canal. 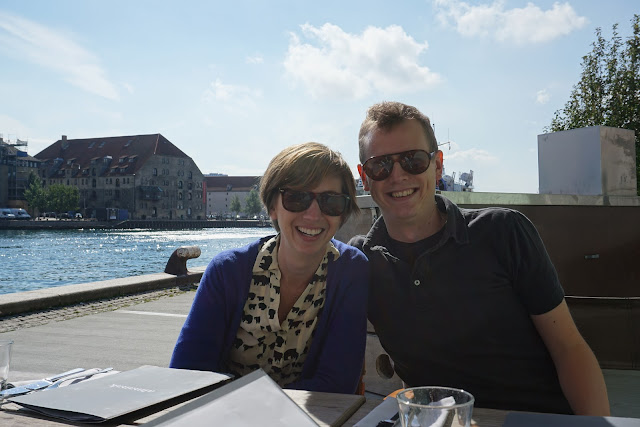 After being a little grey and drizzly that morning, we lucked out with a beautiful afternoon to enjoy our Smørrebrød (traditional open-faced sandwiches) al fresco.

Fueled up and ready to walk more, we headed to the magical amusement park Tivoli on the other side of town. 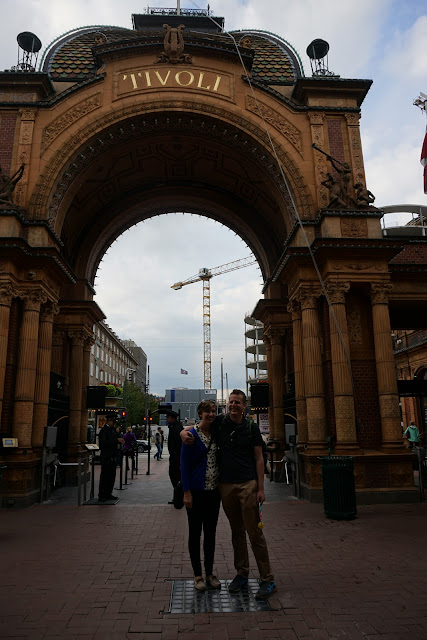 Originally built in the 19th century, it's the second oldest amusement park in the world.  Of course there are rides and games but also beautiful gardens and a concert venue.  It even features one of the world's oldest roller coasters, Rutschebanen, which Jack and Abby were excited to ride.  Unfortunately Natalie was a little too short.

On a great tip from a friend, we had dinner at Alberto K that evening.  It was a fancy place with a beautiful view overlooking Tivoli and yet incredibly friendly staff that didn't bat an eye as we fed our 3 1/2 month old baby between the 6 courses of dinner.  And it was reasonably priced (for Scandinavia at least!). 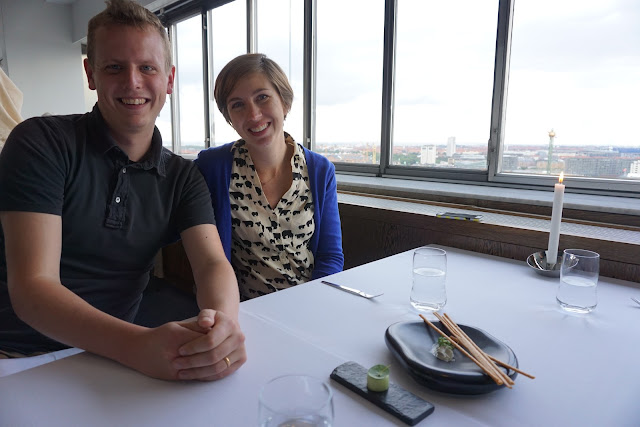 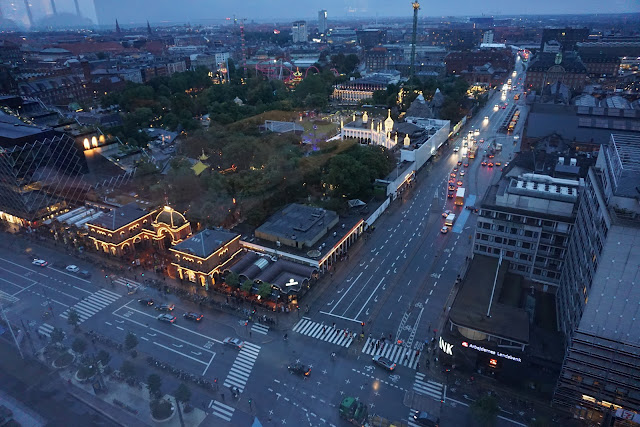 The next day we continued with some awesome meals by heading to a special pig roast hosted by the chefs at Amass, an awesome restaurant that Jack and Abby enjoyed before we arrived.  We opted to take a ferry to get there, which was pretty common to criss cross the harbor. 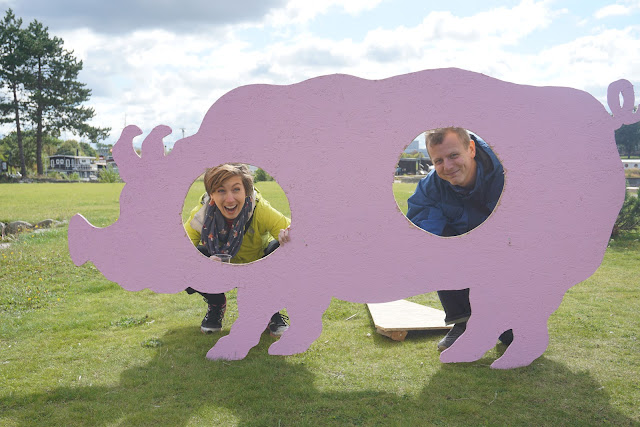 The lunch featured an interesting menu utilizing all parts of the pig and cooked three different ways. 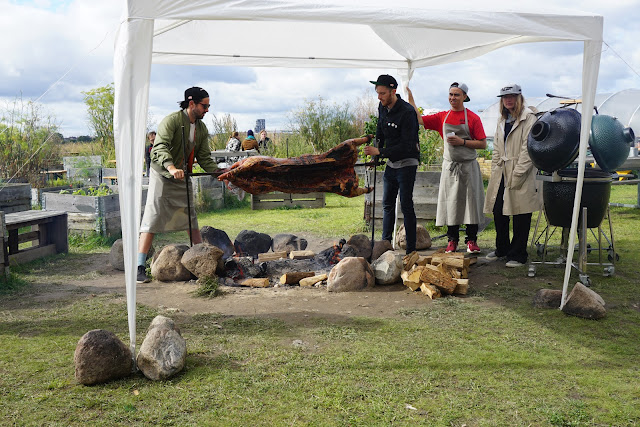 While it was a windy and chilly day, it was fun to try something new in a festive atmosphere.  It felt more like some chef friends were having us over for an experiment, and refreshing to get away from purely tourist activities.  It was a fun find by Abby!

That evening we headed back to Copenhagen Street Food for dinner.  It gets surprisingly busy so we were lucky to have a reserved table instead of hovering over a group until they finished.  It was hard to decide what to actually eat but when it was all said and done, it was unamious that the best side item as the french fries fried in duck fat.  They were *amazing*.  My favorite main dish was a pulled duck sandwich with a spicy thai sauce. 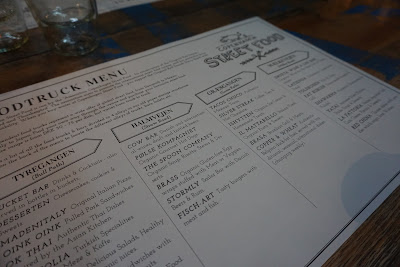 Outside of all of these wonderful activities and meals, Abby had also found a wonderful Airbnb apartment for us to stay in.  It made the whole trip more comfortable and we had some good times just hanging out.  It also allowed me to show off my ping pong skills.


Thanks again to Abby and Jack for so many things...letting us be a part of their European vacation, coming to Europe at least in part to see us, and for finding such a wonderful place to vacation.  It was an awesome time with amazing food, interesting history, and amazing culture!  We are looking forward to them visiting again soon.

Posted by matthendren at 2:06 PM