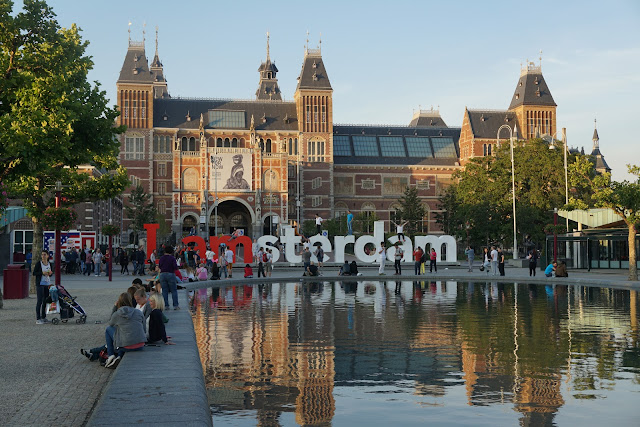 We found ourselves with a free weekend, so we decided to go on a last-minute adventure to Amsterdam.  We packed a few bags, found a great deal on a hotel, and treated Natalie to her first long distance train ride.  She did an awesome job! 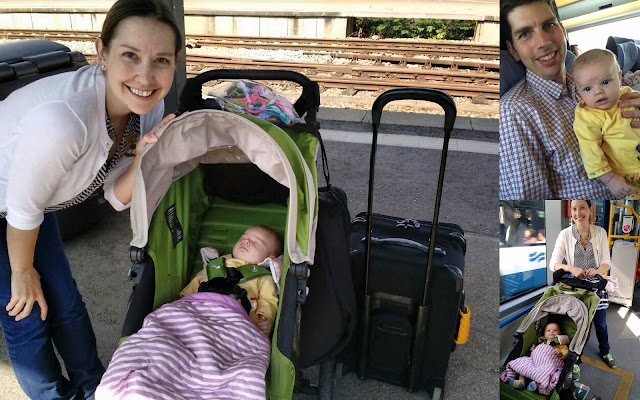 We arrived in Amsterdam that evening and got our first glimpses of the more than 100 kilometers of canals that fill the city. 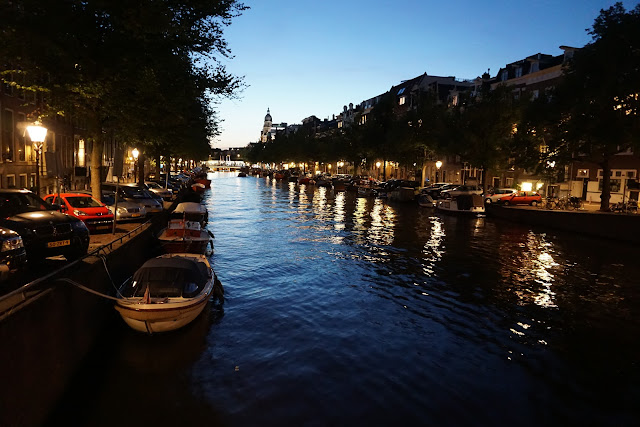 The next morning we were anxious to stretch our legs so we headed to a neighborhood that Abby and Jack recommended, Jordaan.  Despite being a bustling summer weekend full of tourists in the central part of the city, a few blocks away this area was much quieter. 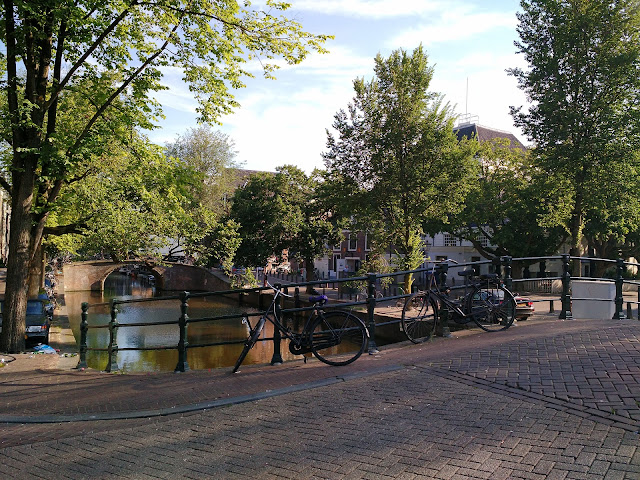 Initially a working class neighborhood, Jordaan is now a pretty nice area with renovated houses, boutique shops, and art galleries.  While wandering through a Saturday market, Kristin found a guy making fresh stroopwafels by cooking them, slicing them open, filling them with honey or caramel, and then putting it back together still warm.  It was even more delicious than it sounds! 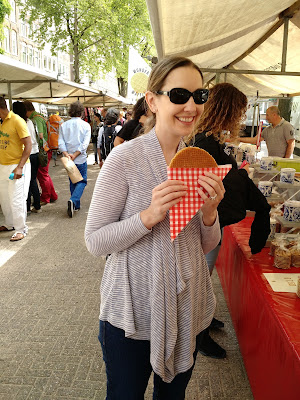 There was also some interesting history along the way.  This statue is of Eduard Douwes Dekker, better known by his pen name Multatuli.  He wrote an influential novel about the Dutch colonists exploiting the natives in the Dutch East Indies, which is now Indonesia.

Canals and bikes, bikes and canals...that's what you expect in Amsterdam, right?  We did too but we were still impressed with how well they are embraced and how the water adds a serenity to the city. 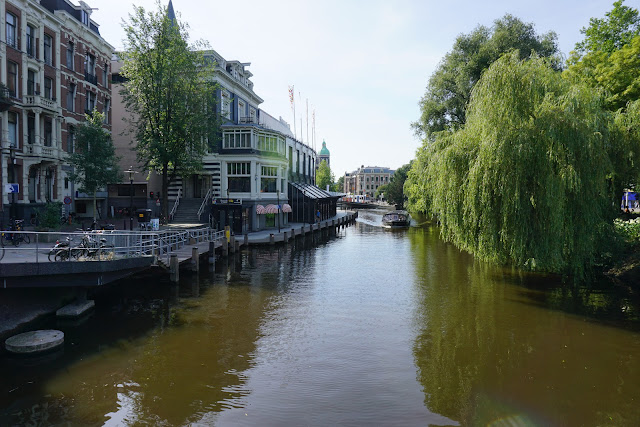 The architecture along the canal is also beautiful; full of buildings hundreds of years old and painted a rainbow of colors.  Amsterdam was spared from any bombing during WWII, so much of its historic architecture is in tact, unlike the nearby port city of Rotterdam. 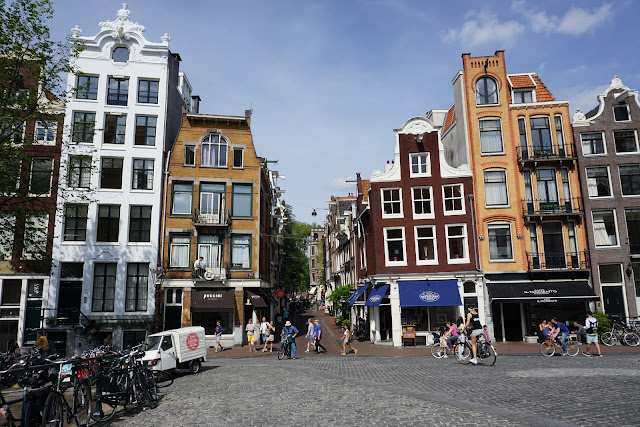 Along the majority of the canals were one-way streets with small sidewalks and precariously perched, preciously few parking spots.  This makes it expensive to own a car and much easier to just ride a bike. 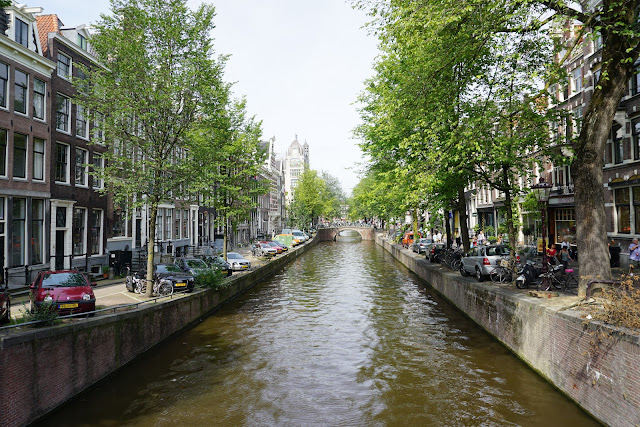 If you look closely, all of the buildings have a hook at the top to allow residents to bring furniture and other things in and out of the apartments through the windows instead of up the stairs.  We have seen this on older buildings elsewhere in Europe where the staircases are still narrow but even the newest ones in Amsterdam were built with a hook.

Of course you can't enjoy a historical European city without also seeing amazing churches.  We were especially impressed by the Westerkerk, which is the largest church in the Netherlands and was built in the early 1600s.  Despite seeing so many old things in our travels, it's still mind-blowing to think how much this church has lived through.  It was completed in the same year that the first governor of Massachusetts, John Winthrop, took office. 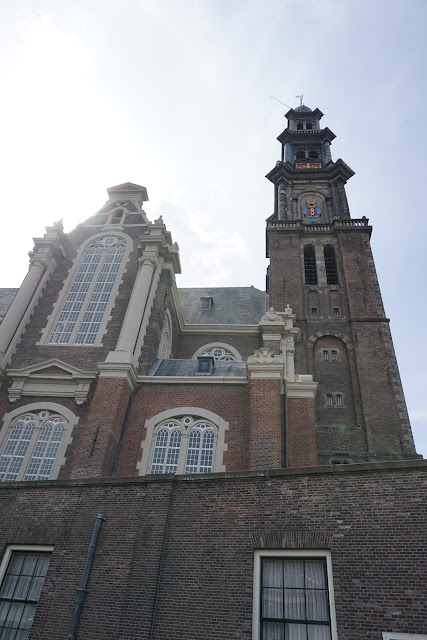 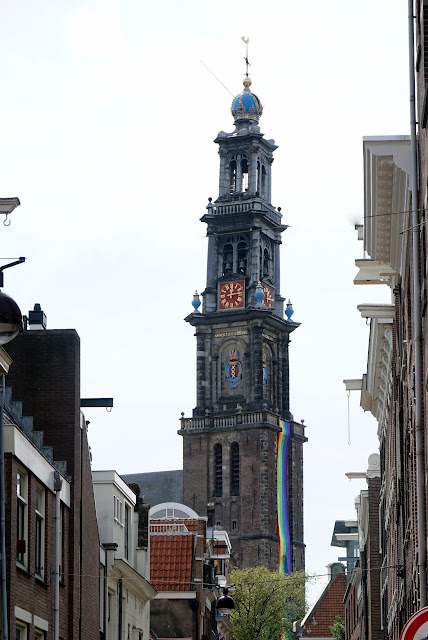 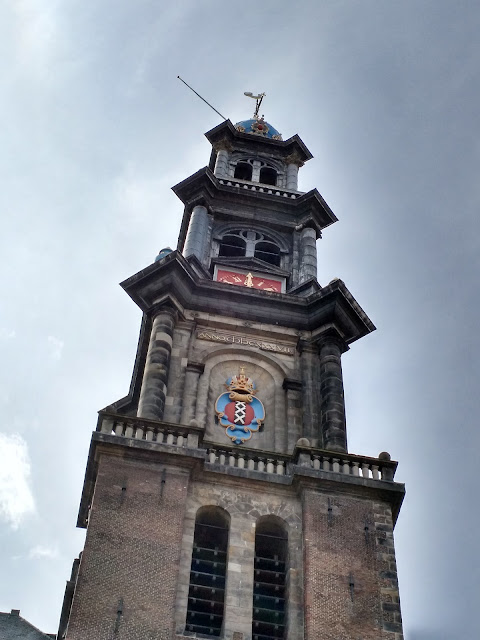 Continuing with Jack and Abby's great advice, that evening we booked a table at an Indonesian restaurant west of the city center called Restaurant Blauw.  The walk there took us through the entire length of Vondelpark, which is like the Central Park of Amsterdam.  Natalie was a little fussy when we started our walk but soon she was sound asleep in her stroller. We will pretend that all of the blue smoke from people chilling out on a nice weekend evening didn't have anything to do with it. 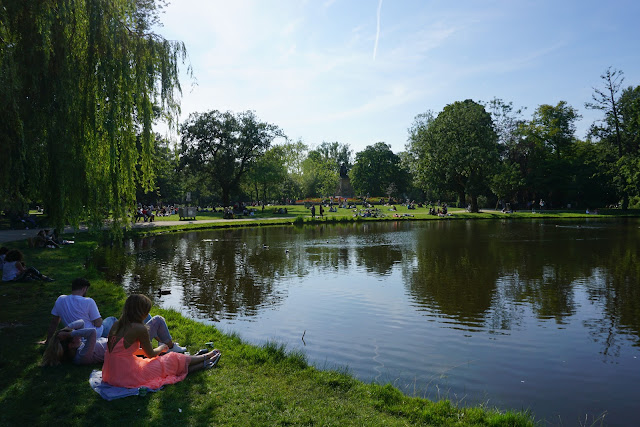 Unfortunately once we arrived at the restaurant, they didn't have our reservation because I had misunderstood my Dutch and failed to click through the last confirmation page.  Despite Natalie waking up cranky and spitting up on my shirt at this point, the host took pity on us and gave us some seats in the corner.


With what we learned about the Dutch using Indonesia as an outpost for trade, it made sense as to why there are several Indonesian places to eat in Amsterdam.  I don't think I have ever had Indonesian food before but I look forward to having it again!  Best of all, I got a Rijsttafel  (Rice Table) that allowed me to taste a little bit of several different things...and they were all delicious.


We were very fortunate with the weather and had beautiful sunny days to enjoy the city.  Before we arrived it had rained several days straight, as is more typical of all of the cities along the north coast.


I still forget how close the countries of Europe are despite having such distinct cultures.  Little things will pop up and remind me along the way, like how all of the restaurants in Amsterdam feature Heineken (brewed locally) but also offered lots of Belgian beer.

Much of our time was spent walking around the city and exploring.  There seemed to be an endless number of quaint streets between all of the canals, featuring great cafes, interesting boutiques, and this guy: 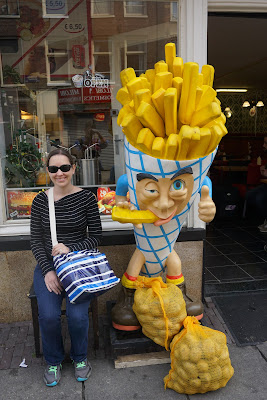 Along the way, Natalie had been busy in the stroller reading her book about Captain Calamari... 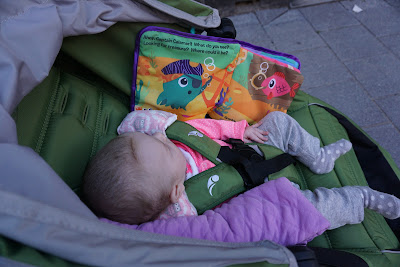 So she was a little surprised when I got the seafood platter that night.


The one museum we did hit was the Rijksmuseum, which was an incredible collection of art and other artifacts.  It starts with the building itself, which was built in 1885 specifically to house the collection and then underwent 10 years of renovation, opening again in 2013. 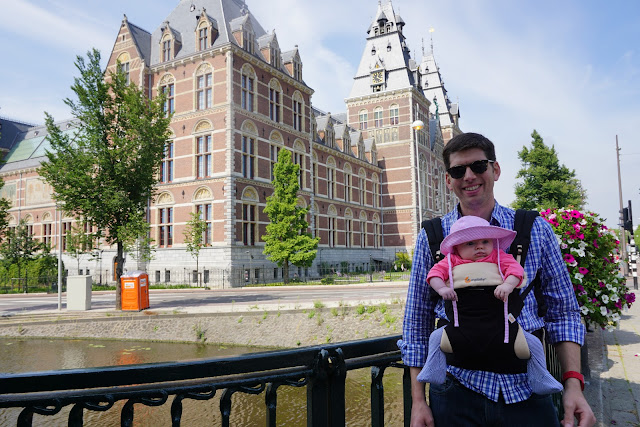 The inside is as spectacular as the outside.  In each area to the right and left in the picture below, there was a collection of similar paintings from the same era and then a helpful card explaining the significance of the paintings and highlighting details that tell the story about the style and era.  It was like no other museum I have visited and helped a layperson like me appreciate the context of the paintings and other art. 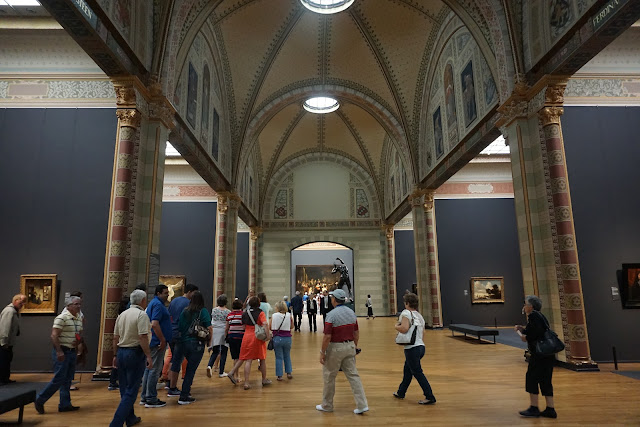 Much of the building was nice and open, with amazing details like these mosaics extending across the floor, walls, and ceiling. 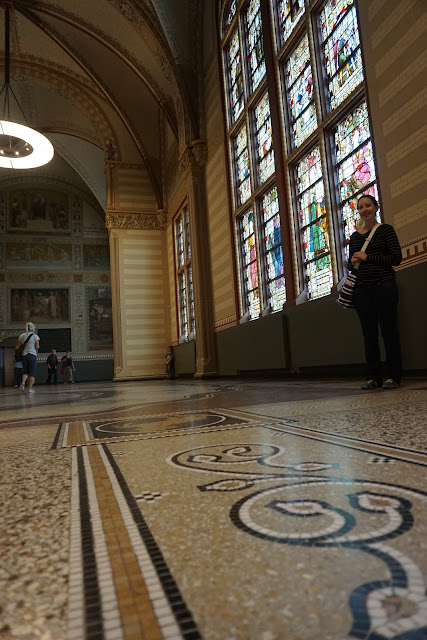 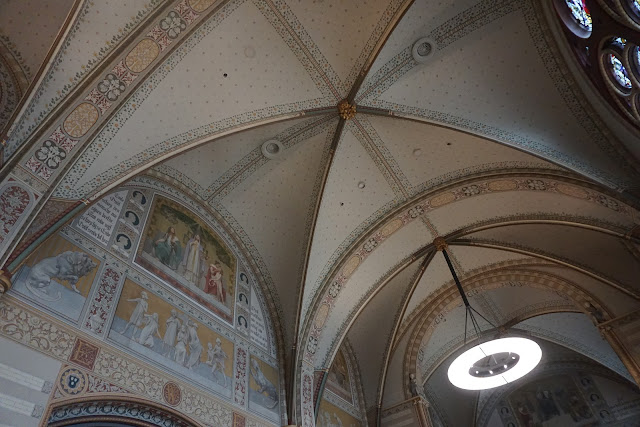 This was Kristin's favorite painting, showing a Dutch town in the middle of winter.  The canal has frozen so people are using sleds and ice skates to get around.  It's a bright and happy winterscape instead of the typical cold and dark scene.  I like this attitude. 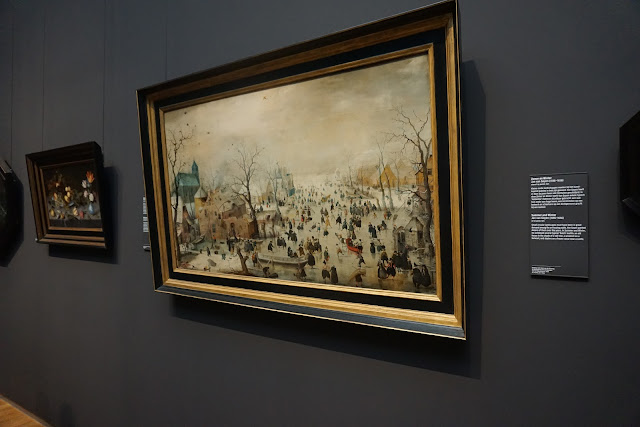 As I mentioned, the museum was full of artifacts instead of just art.  This area was presenting the height of the Dutch power and riches through the Dutch East India Company.  There were other rooms presenting some of the treasures that were brought back from southeast Asia, including beautiful pieces of furniture and jewelry. 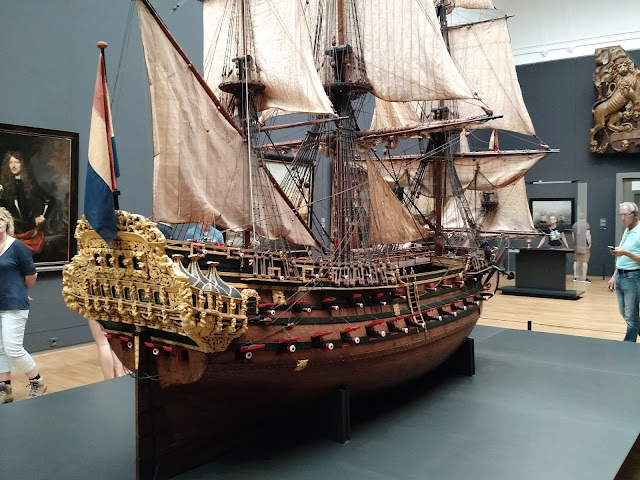 Finally, there was a beautiful library to display some of the thousands of books the museum has acquired.  Just like the rest of the building, the attention to detail was incredible and there are even a few tricks to make the room look even more expansive.  It was also built to bring in lots of light to make it easier for visitors to read. 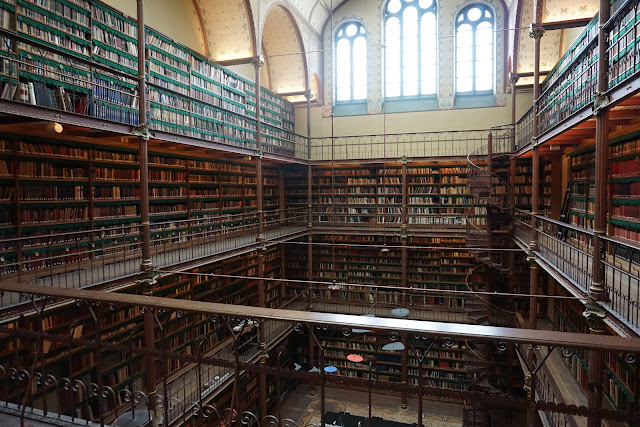 We did tour the red light district as well, but I'll limit my commentary to this picture of one of the bollards marking the edge of it and by saying that it was more touristy and less seedy than I had expected. 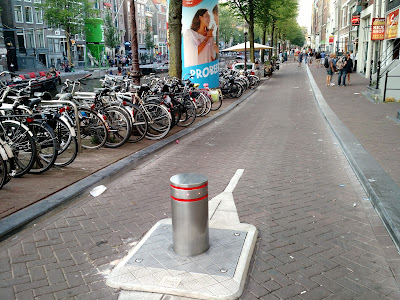 Needless to say, it was a full few days and Natalie was sure pooped by the end! 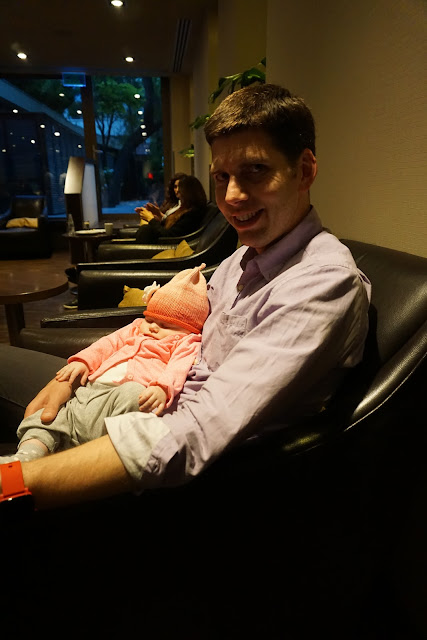 The final adventure was Natalie's first plane ride!  We flew directly from Amsterdam to Stuttgart.  Despite the hour delay, she did great.  It helped that we were prepared with about 17 toys, pacifiers, bottles, and anything else we could think of to keep her happy.  Plane rides used to be a chance to relax, reflect, read, listen to music, or sleep.  No more!!


Thanks again to Abby and Jack for great recommendations.  Amsterdam was a place we knew we had to visit while here in Europe.  We had a wonderful time and lucked out with excellent weather! 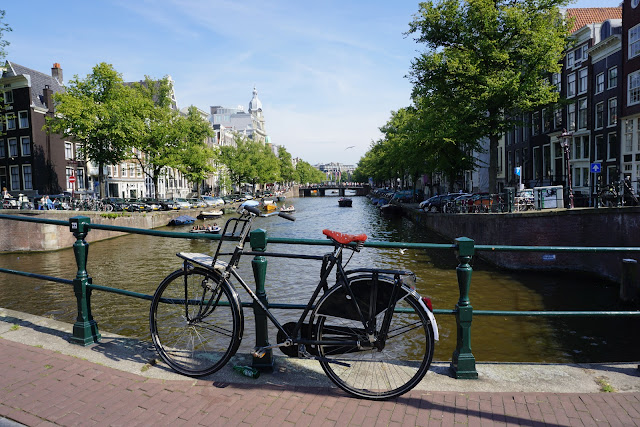 Posted by Kristin Hendren at 12:00 PM