Mama and Papa H Visit (part 1 -- Garmish, the Mercedes factory and a walking tour of Stuttgart)

My parents were excited to come see their first grandkid in person and the fact that it required a trip to Germany made it all the more fun.  Kristin and I had taken a few 30+ minute car trips with Natalie and she seemed to behave herself, so we decided to do a few excursions with my parents to show them not only Stuttgart but the awesome stuff around it as well.

Fortunately their travel to Germany went well and we picked them up at the Stuttgart airport.  They were very excited to see Natalie and I think they were happy to see Kristin and me as well.

Despite being late June, we had some cool, wet weather to greet them, but that didn't stop us from traveling.  I'm glad they heeded my advice and brought jackets! 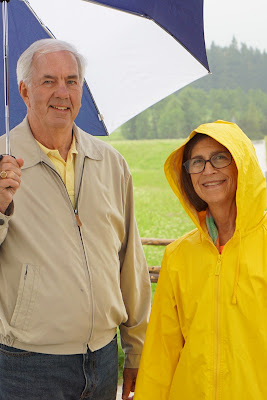 Wasting no time, we headed south on the Romantic Road toward the Alps and made a quick stop at the Wieskirche.  Kristin and I had actually driven right by it over a year ago coming home from skiing, but didn't bother to go inside because we didn't realize how big of a deal it is.

After a miracle was reported in this area of southern Bavaria in 1738, pilgrims started streaming in to visit the site.  The regional Abbey realized they needed a proper church to receive the visitors and commissioned this, built between 1745 and 1754.  Many that have prayed here since claimed to have received help, so pilgrims as well as normal tourists seek it out to this day.  It's a huge church considering it's in the middle of a meadow and there are only a few small villages around.  Inside it is full of paintings and sculptures featuring ornate details.

A few more kilometers in the car and we made it to our weekend getaway in Garmisch-Partenkirchen that I had found on airbnb.  The clouds hid our view of the mountains but the town is still pretty quaint.

Excited to try some local delicacies, Dad enjoyed this schweinshaxn (ham hock) and some regional wine. 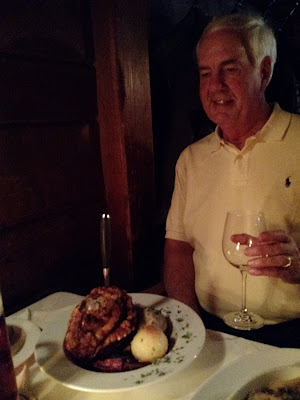 With a dreary weekend forecast, it was encouraging to wake up to blue sky and a great view of the Alps from our deck.  These peaks form the border between Austria and Germany and include Zugspitze, the tallest mountain in Germany (but only the 15th tallest in Austria). 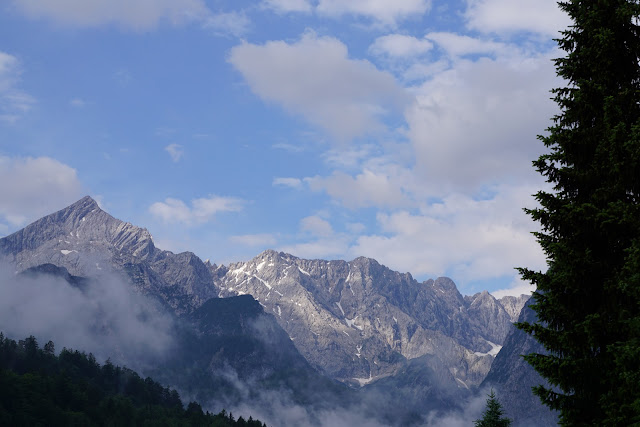 Garmisch-Partenkirchen was the host of the 1936 Winter Olympics, the same year Berlin hosted the Summer Olympics that was full of controversy (after the Reich Chancellor, Adolf Hitler, initially banned Blacks and Jews from competing but then Jesse Owens went on to win 4 gold medals).  Wikipedia also tells me this was the last time the Summer and Winter Olympics were hosted by the same country in the same year.

As the clouds returned, we spent the morning exploring the area.  Modern day Garmisch-Partenkirchen is a cute tourist town that is a great jumping off point for many mountain adventures, such as hiking, biking, skiing, and ice climbing.  The surrounding meadows still have lots of farming and livestock.


After lunch we were ready for a hike and decided to check out the nearby Partnach Gorge.  To get there, we parked at the Große Olympiaschanze (Great Olympic Hill) where the opening and closing Olympic ceremonies were held.  It still features multiple ski jumps and is the site of several competitions each winter. 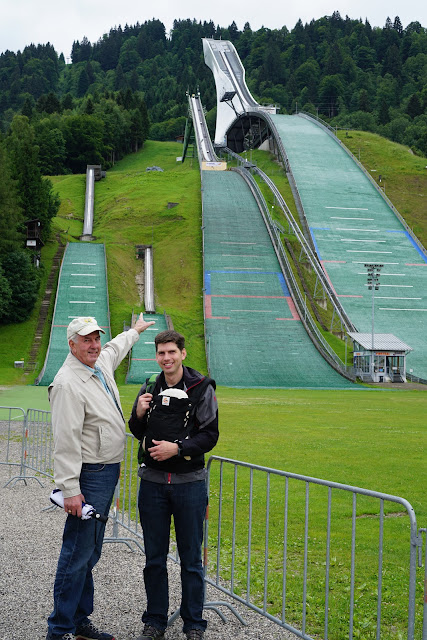 To find the gorge, we followed the river past the lumber mill and upstream toward the mountains. 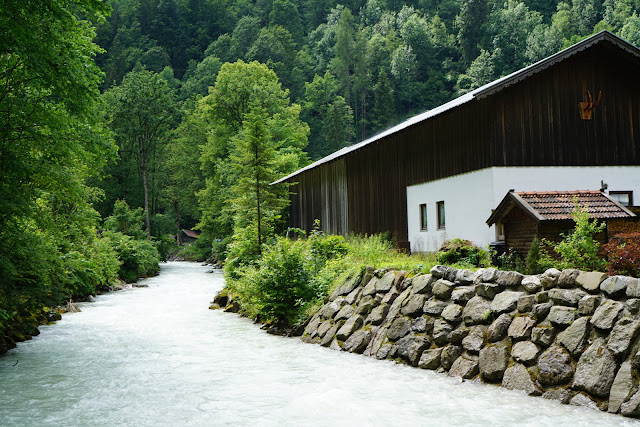 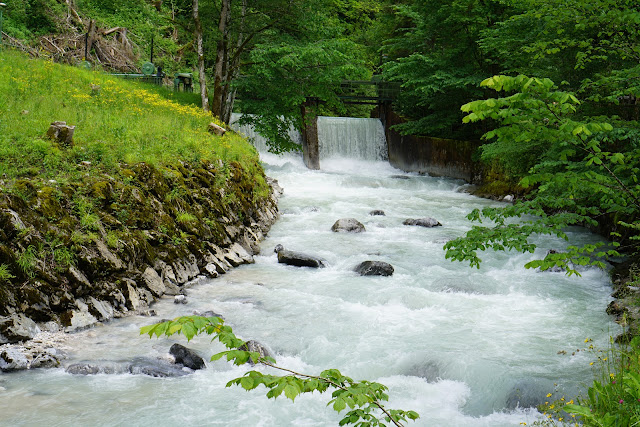 In true German fashion, after a 15-minute hike through the woods, there's a Biergarten in case you need to stop for some refreshment. 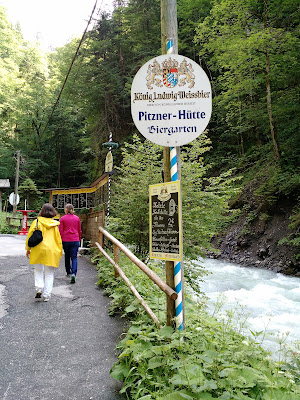 The gorge itself was well worth the walk and an amazing spectacle.  The walls of the canyon are over 200 feet high and sometimes only a few feet apart.  It started to rain about the time we got up there so there were also waterfalls streaming down the sides of the rock.

Sometimes it was so narrow that the path was actually cut into the side of the rock while the river rushed below. 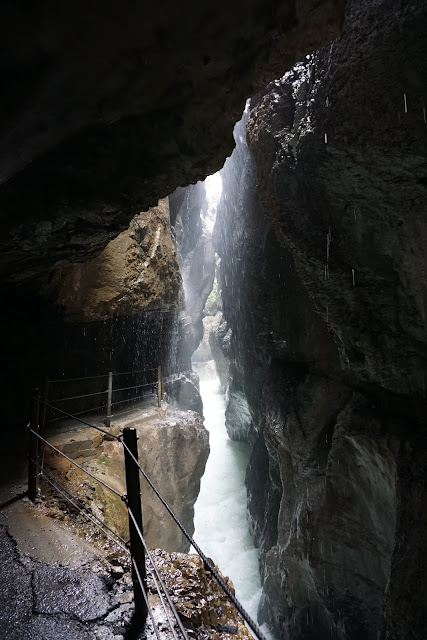 At the other end, the valley opened up again and the sun was peeking out.  The water is a cloudy turquoise because it's fed by glacial melt and features small rock particles ground up by the glacier above. 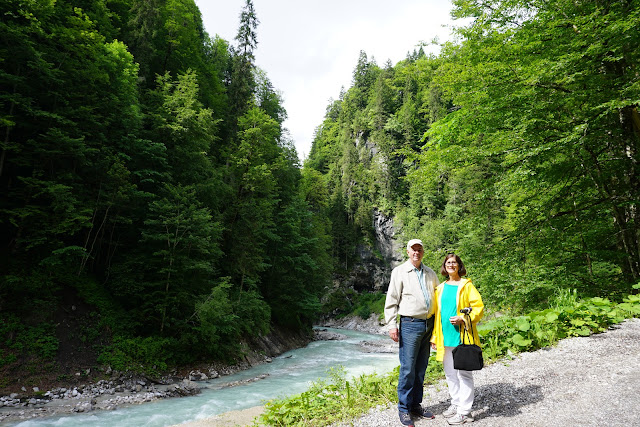 Instead of heading straight home the next day, we drove west to Bodensee (Lake Constance) and stopped in Lindau for a great lunch at Gasthof Alte Post. Unfortunately, it was still overcast so we couldn't appreciate the view of the Alps across the lake but it was still pretty. And much warmer than our last visit.

Back home in Stuttgart on Sunday we took it easy.  I showed Mom and Dad where I work and then we headed to an international festival in the nearby town of Sindelfingen (one of the many, many festivals going on over the summer).  After wandering around a bit, Dad and I both saw the guys at the Transylvania booth grilling up some meat that smelled awesome and tasted even better.  Natalie enjoyed the festive atmosphere so much that she slept right through it.

As a special treat for my parents (both are engineers), I booked us on a tour of the Mercedes-Benz factory in Sindelfingen.   It's their largest plant and where they make the E-Class, S-Class, CLS-Class, and AMG GT.  It was amazing to see the beginning where robots were welding or gluing the metal together and the end where the people on the production line were adding the final touches.  Unfortunately they don't allow any pictures inside so this is all we got. 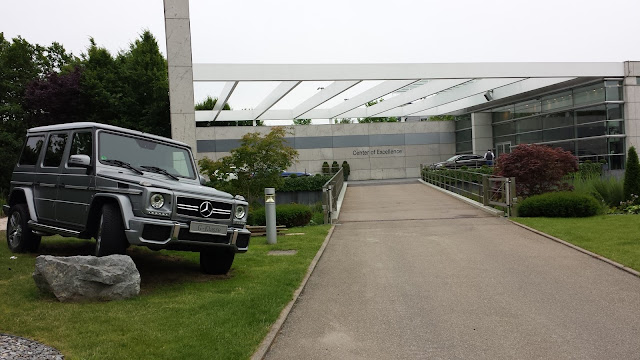 With Dad's whirlwind trip coming to an end, we did a walking tour of Stuttgart to give Mom and Dad a good chance to see the town, as well as for Kristin and me to learn more about the city we live in.  It was a great experience despite more drizzle on and off.  The guide explained the history of many of the amazing buildings we walk by every week or so when we are downtown and gave us an even deeper appreciation for the area.

This is the day I had to unfortunately drop Dad off at the airport.  Kristin, Natalie, and I had an awesome time with him and the three of us are excited for next year when he has more time to come back!  The silver lining was that Mom got to stay two more weeks and we had lots more adventures with her.
Posted by matthendren at 8:19 PM