Some doubted this post would ever appear...like little kids waiting for Santa himself to show up.  Better late than never, right?  Just a short 2.5 months ago Christmas market season was in full swing once Kristin got back from spending Thanksgiving in Boston. We love Christmas so we used it as an excuse to explore some towns around Stuttgart, buy some presents, and drink Glühwein.

Wasting no time, I picked Kristin up at the Frankfurt airport and we stopped in Heidelberg on our way home.  This is a neat old town set on the river with a castle overlooking it from the hill.  I had briefly visited the town a few weeks earlier but otherwise didn't know much about it. So we just parked in what looked like a central location and followed the crowd.  After strolling down a pedestrian mall nearly a mile long, and stopping for some Glühwein to warm up, we came across the main part of the market filled with little wooden huts selling crafts, food, and other such items.

Kristin still had a bit of jet lag 3 days after flying back, but when I told her the Tuesday night run was ending at a chocolate festival she was all in. After a very short trail, the group finished in the main square that was filled with tents selling all forms of chocolate. Technically this wasn't a Christmas market (the chocolate only lasted a week and then evolved into one) but there was a lot of overlap and it was fun to see another nearby village.

"Bad" translates to "bath" and Bad Cannstatt is a city district just across the Neckar river where hot springs form mineral water baths that Germans enjoy relaxing in. This Christmas market was just a few blocks from our temporary apartment so we started our Saturday by walking over and checking it out. It was a little quieter than we had expected but the village has a great historical feel, reflecting the fact that people have been living around there for over 2000 years.

Excited for more, we jumped in the car and drove about 30 miles to a Christmas market in Maulbronn that's held in the courtyard of an 1147 monastery that, according to Wikipedia, is best-preserved medieval Cistercian monastery complex in Europe. Not knowing this going in, we entered monastery courtyard to find an amazing setting, great food, and lots of neat handmade gifts. 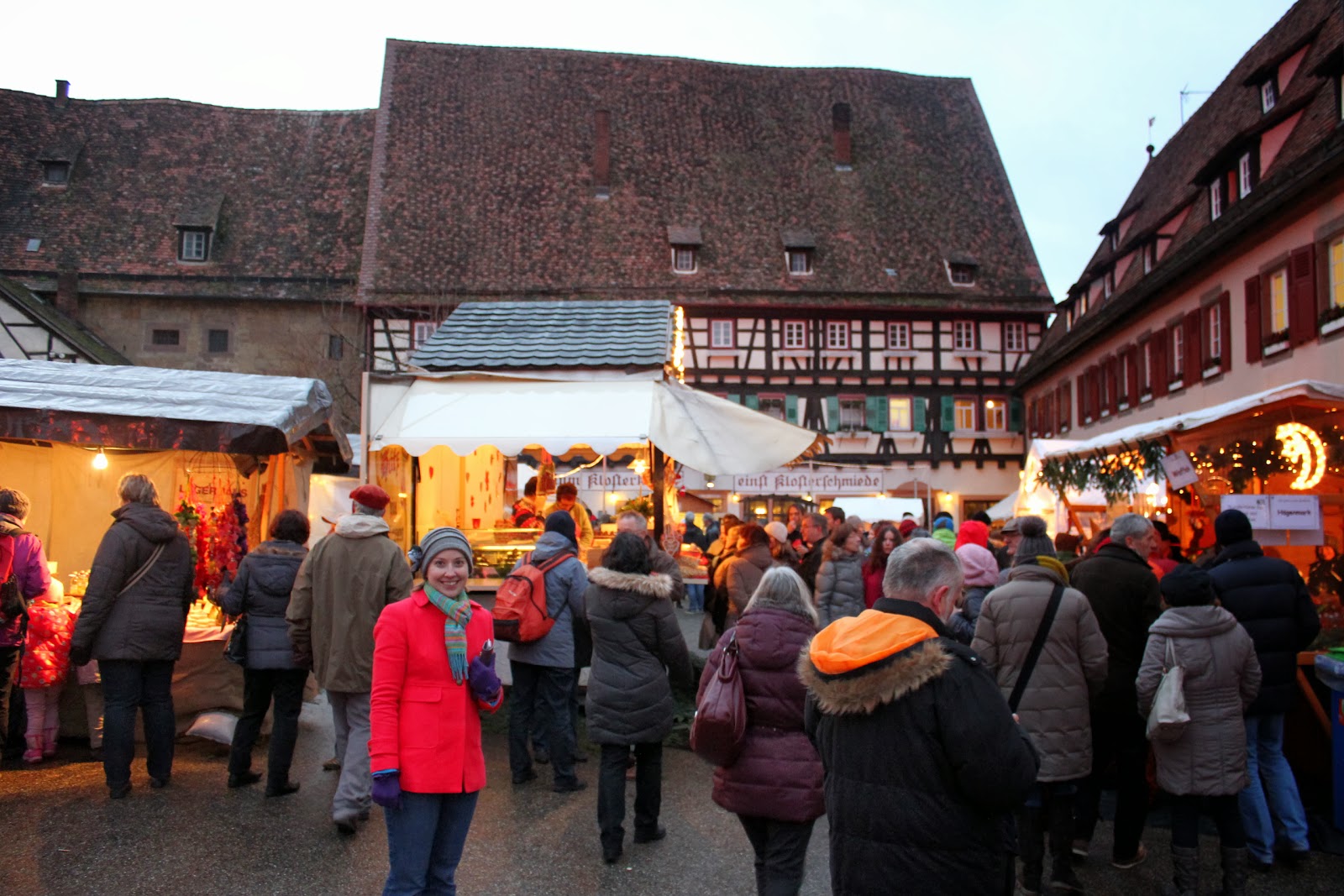 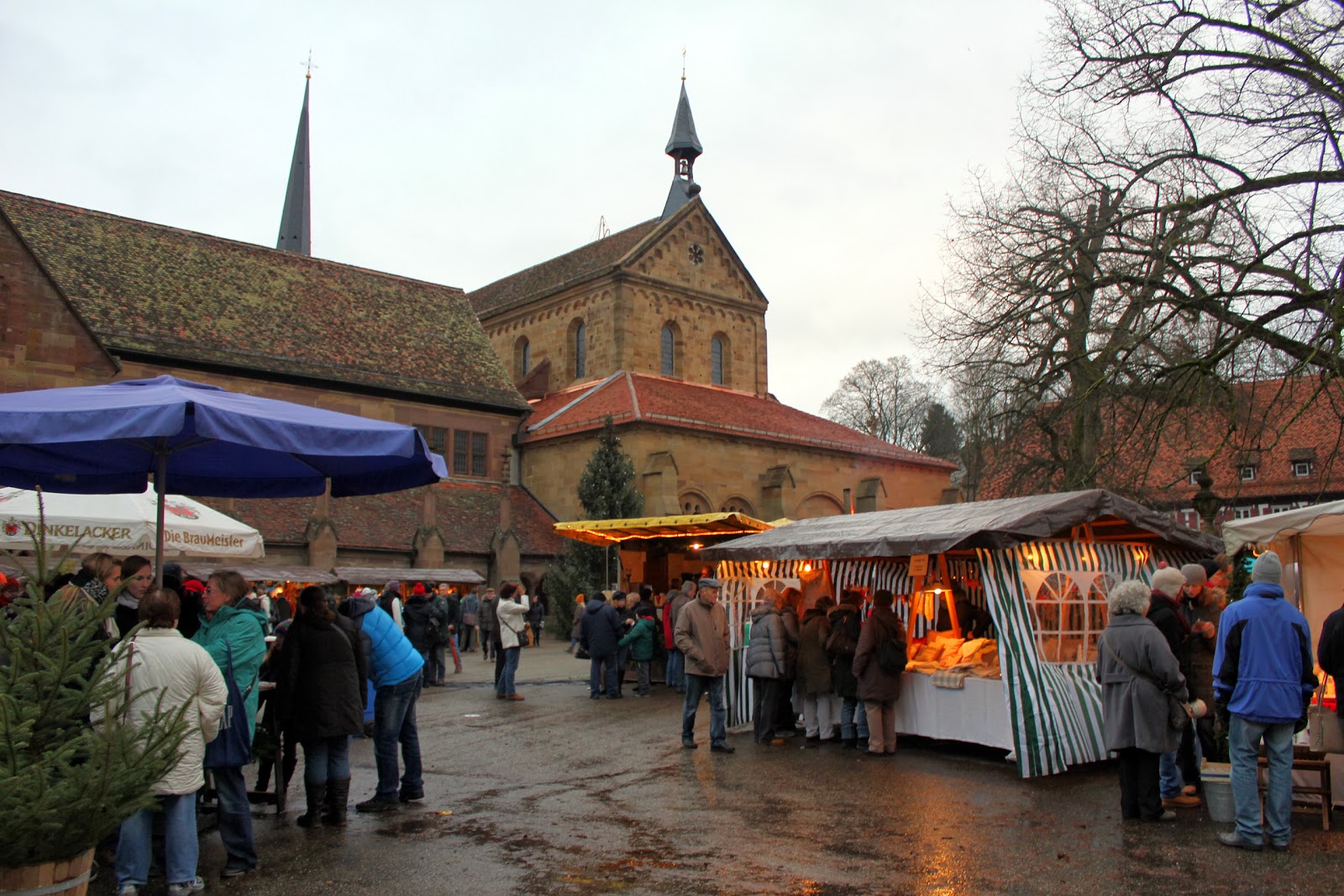 Looking for a second meal of the day, Kristin spotted these planks with salmon filets roasting by the fire and immediately decided we needed one.  We waited patiently in line but as soon as we got to the front, they ran out of fish for that round and told us to come back in 20 minutes. 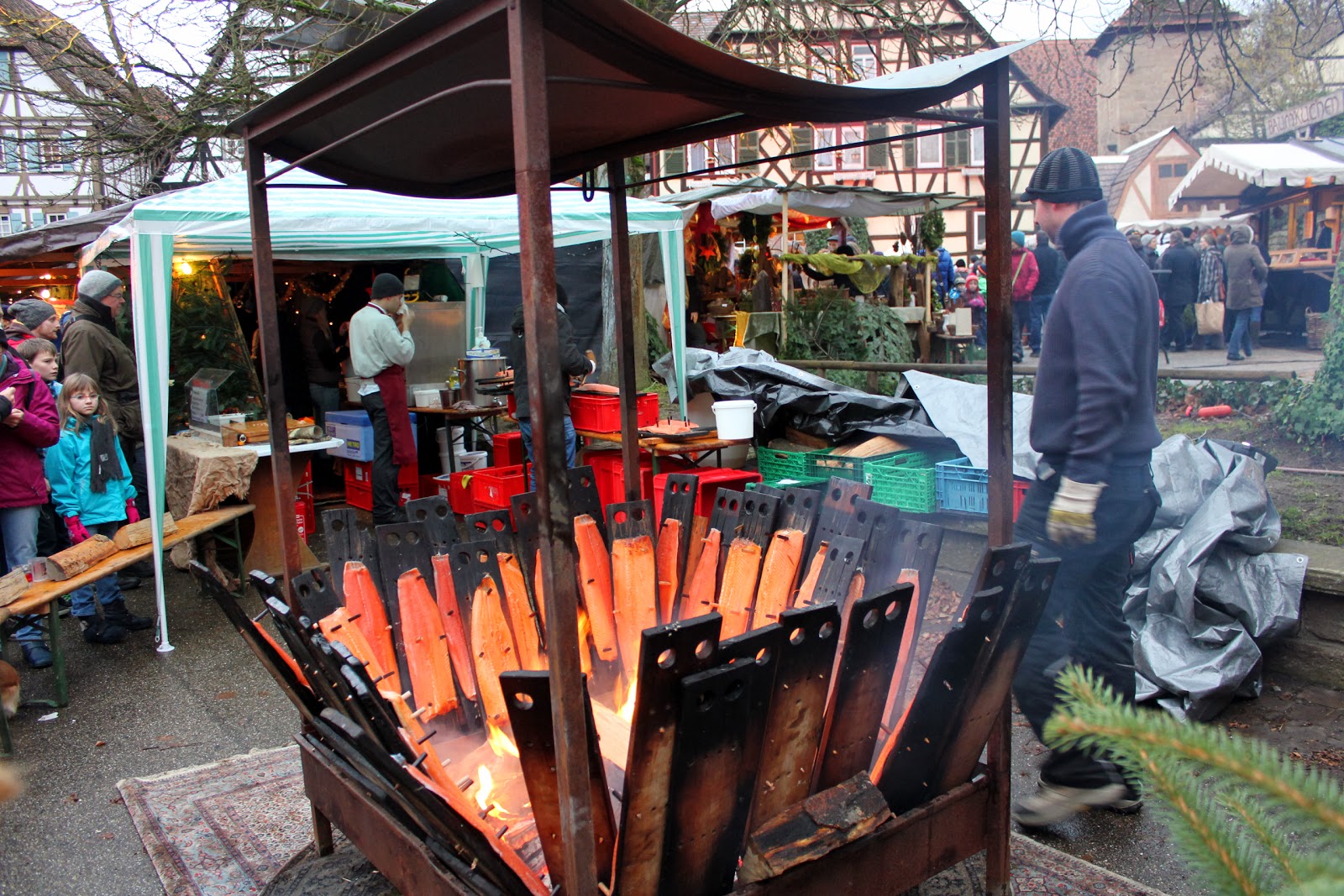 Despite the other temptations, we waited for the next round of fish and showed up exactly 20 minutes later.  Kristin is usually pretty aggressive when it comes to lines and I'm pretty aggressive when it comes to food but when one old lady wandered in front of us, we didn't have the heart to call her out.  And then she got the last piece of salmon for the round...leaving us again hungry.

Instead of more waiting, we settled for Flammkuchen (translates to "flame cake"), which is like a thin pizza crust often with onions, bacon, and a little cheese sauce.  Wikipedia tells me this is actually a traditional French dish, native to the Alsace region about 60 miles from Stuttgart.

To cap off the day we hit one more market in Durlach. This one has a medieval theme and is in the shadow of their castle in the middle of town. It was pretty small, a little hokey, and it had started to drizzle but this market did provide the best meal of any of the Christmas markets. 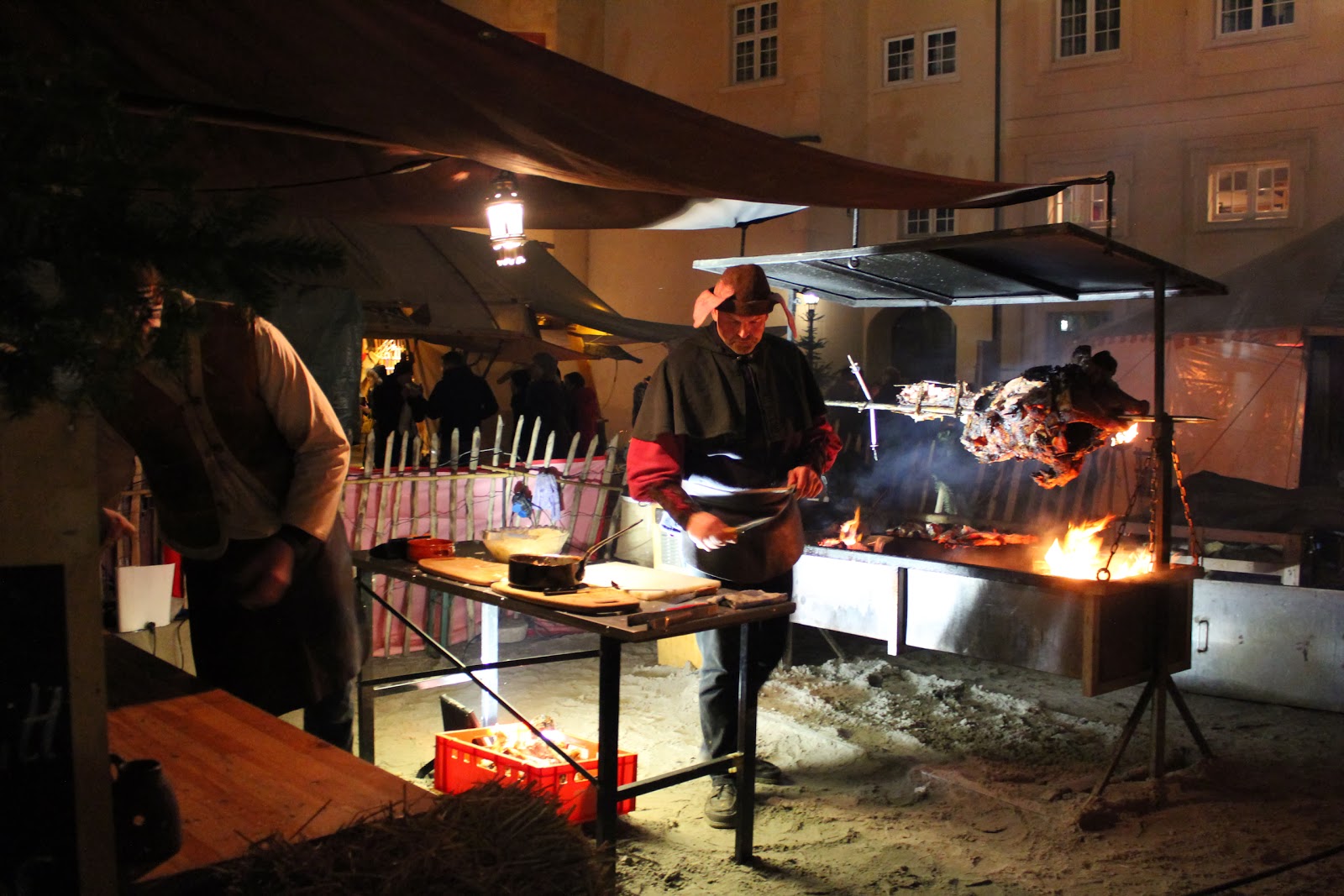 Two guys had a pig on a spit that had been roasting all day and it smelled awesome.  When you order, they just cut off a few hunks and pop them onto a roll to make a sandwich.  Add a little mustard and you have some of the best pork I've ever had.  Well done, gentlemen...and sorry you have to wear goofy medieval outfits.

Sunday morning we woke up with more Christmas (market) spirit and started the day in what could be considered a suburb of Stuttgart, about 8 miles from downtown.  Sundays are traditionally a quiet day around here when all of the shops and stores are closed so I think that contributed to this market's sleepy feel.  By now we were tired of the traditional market food and were excited to see a stand selling surprisingly good Indian food.  The only other memorable thing was a fire where kids were roasting marshmallows but they wouldn't give Kristin any.

Just as you're probably tired of hearing about them, by Sunday afternoon we were getting a little tired of visiting Christmas markets and debated whether we should hit one more this weekend, knowing the entrance fee was €10/person.

The crazy lady whose apartment I rented before moving to our permanent place really wanted to take us to Esslingen's Christmas market because it's her favorite and she wanted her non-English speaking husband to meet us.  We actually finished a run in this market but didn't have the heart to tell her we'd already been, and it gave us a chance to actually take pictures.

We saved the best, or at least the biggest, for last and finally ventured down to the Stuttgart Christmas market the following Saturday.  It's been going on since at least 1692 and is the largest of its kind so we feel fortunate to have it within walking distance of our apartment. 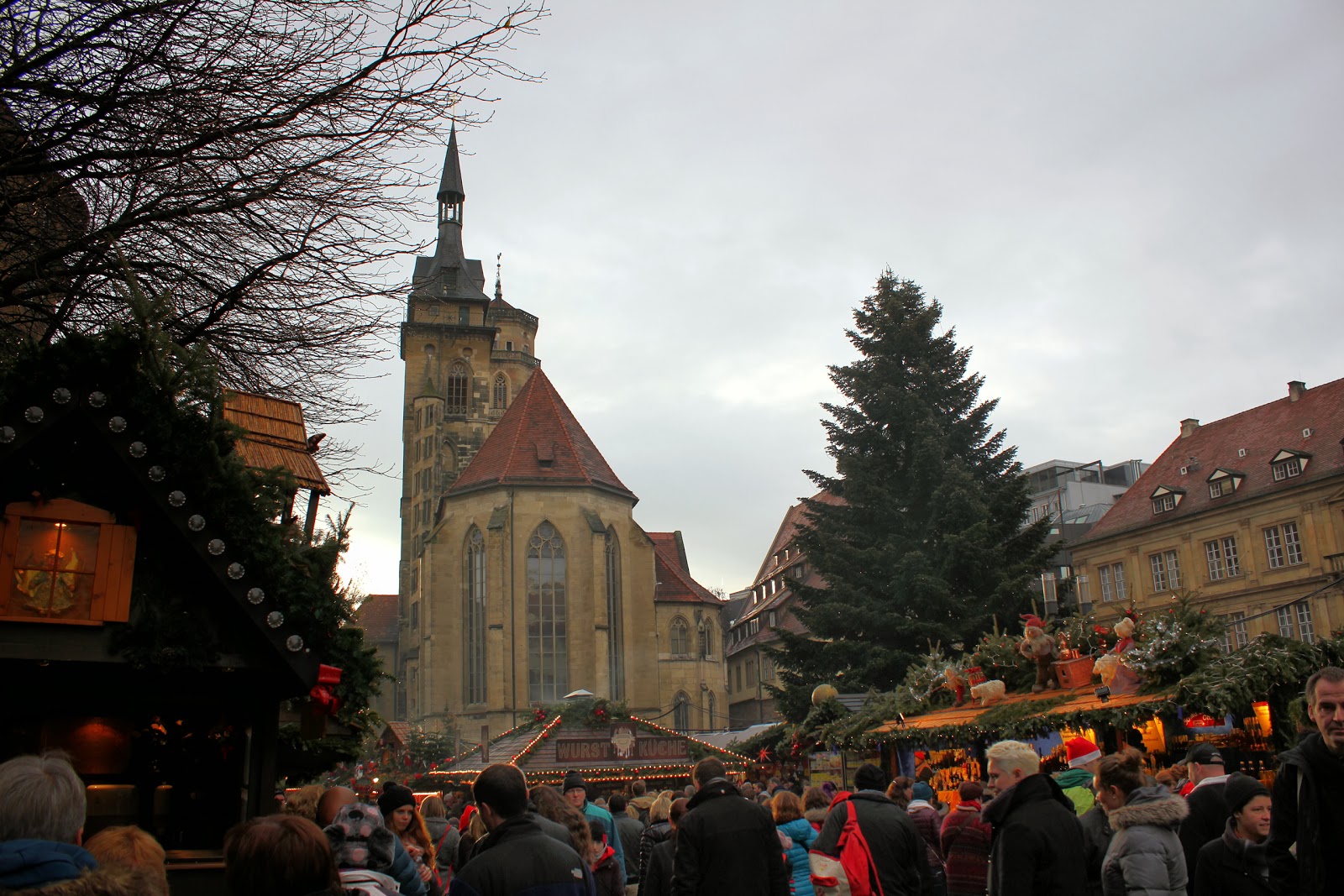 Well, that's it until next year.  Cheers!