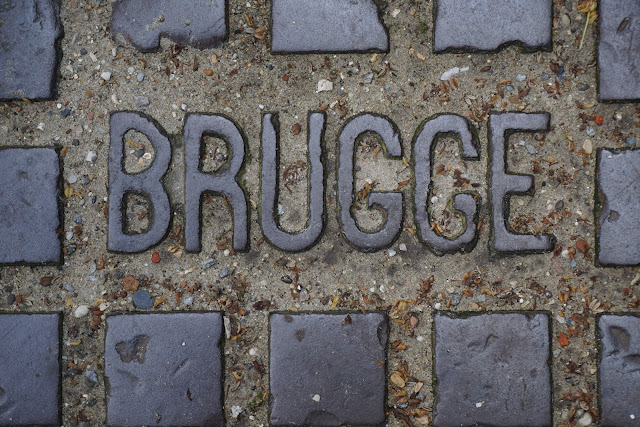 My dad loves mussels and good beer, while my mom loves chocolate, so it seemed like a great idea to (re)visit Belgium.  Taking advantage of the long 4th of July weekend, we booked a night in Brussels and then four in Bruges.  This trip ended up being the longest European vacation Kristin and I have taken since moving here...we save extended stays for when we travel longer distances (India and the USA).

So one day (Wednesday) we hopped on a train after lunch in Stuttgart, had a 2 minute layover in Frankfurt to literally just cross the platform, and then we were in Brussels!

Acting on a tip from the guide book, our first stop after dropping our bags was a great place off the main square for dinner.

After dinner and a bit of walking around, Dad and I left the ladies to chocolate shop while I took him to a bar we had discovered on our last trip to Brussels.  By some claims, Au Bon Vieux Temps is the oldest bar in Brussels (proudly serving for over 300 years!), and they regularly have one of the best beers in the world available as well.  What better way for father and son to celebrate visiting the fine beer capital of the world?

Westvleteren Brewery, at the Trappist Abbey of Saint Sixtus, was founded in 1838 and for the last 70 years has consistently brewed 60,000 cases of beer, not a drop more.  The monks heavily discourage the reselling of their beer, so to get it from them you have to call their "beer hotline" a month in advance and place your order.  You then have to show up at the prescribed time and each car is limited to one case of beer.  Their Westvleteren 12 has been named by a few groups as the best beer in the world, so you can imagine the demand has gone up, up, up as the supply remains flat.  We felt fortunate to find a place that offers it, especially at a reasonable price.  Welcome to Belgium. 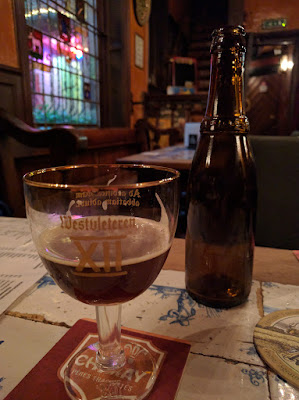 Thursday morning Kristin, Natalie and I played tour guide and showed my parents all of the best highlights of Brussels.

With tour tour of Brussels finished, we headed to the station and hopped on a train to Bruges.  Earlier in the day we had checked out of our hotel and left our bags in luggage lockers at the station.  As we were reassembling them, Natalie decided to explore one. 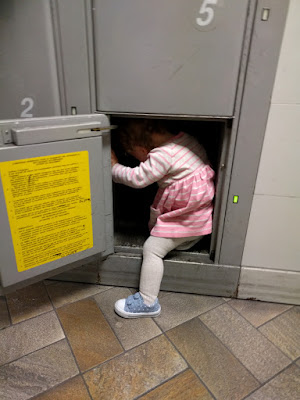 There are frequent trains from Brussels to many parts of Belgium, making travel extremely easy. We arrived in Bruges in about an hour and then we settled into our Airbnb house.


Growing up in a house built around 1920, I thought I knew about old houses.  This one was built in 1673!  It was nicely restored and provided a great base for our adventures over the next few days.

Just walking around Bruges was a pleasure.  The town is full of interesting old buildings and the canals cutting through it add loads more charm. 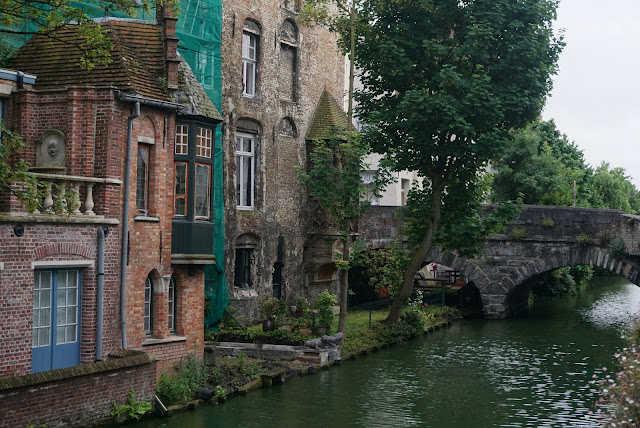 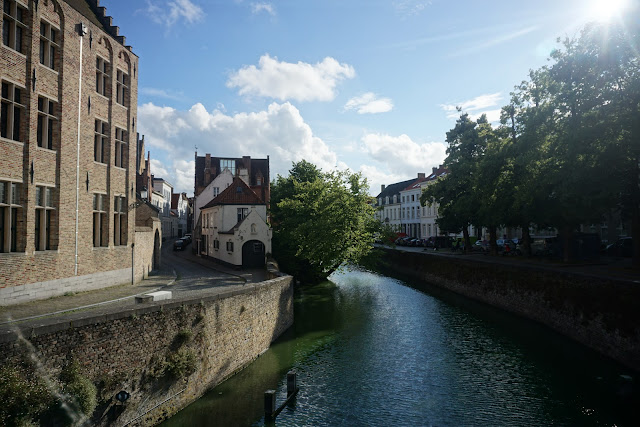 The first night we easily found a good cafe and enjoyed a great view of the quintessential bell tower. 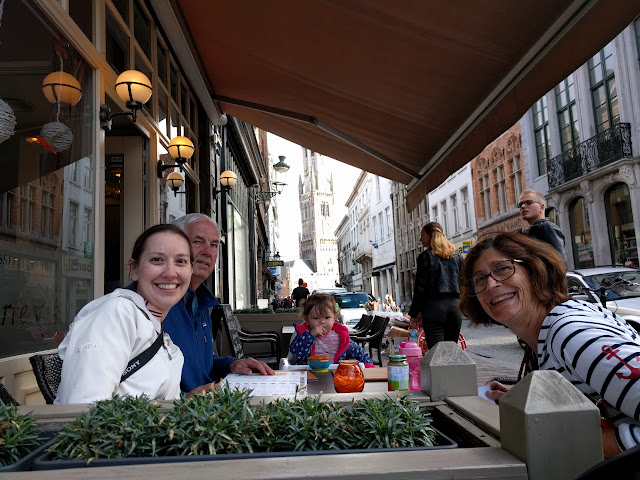 The next day, Friday, I took Dad to the Bruges Beer Museum as part of his birthday present so we could learn a little more about what Belgium has to offer.  In a country with three official languages (Dutch, French, and German) and a museum catering to tourists from around the world, the museum took a novel approach and didn't post any captions next to the exhibits.  Instead, there is just a picture and you use the camera on the provided iPad to get the description in text or audio in your preferred language.  Some exhibits even have videos associated with them.  It was a clever solution that I expect to see in lots more museums in the future.

My favorite part was a wall where they had paintings of all 11 monasteries that produce Trappist beer, as well as a picture of their hallmark beer (in the proper glass, of course!).  Each had a code next to it so you could learn more about their history. 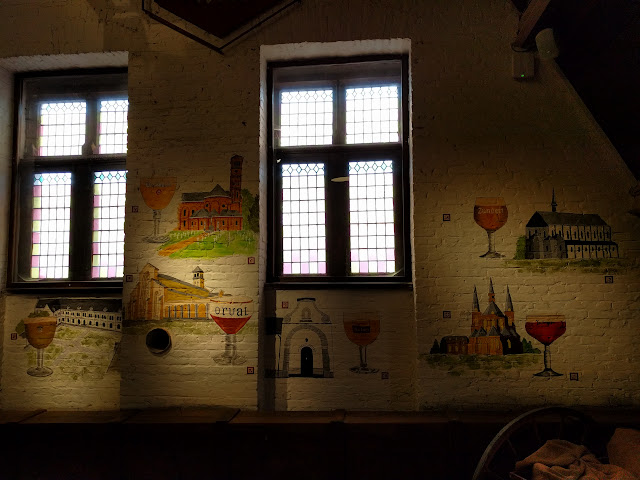 The rest of the day we continued to explore the city. 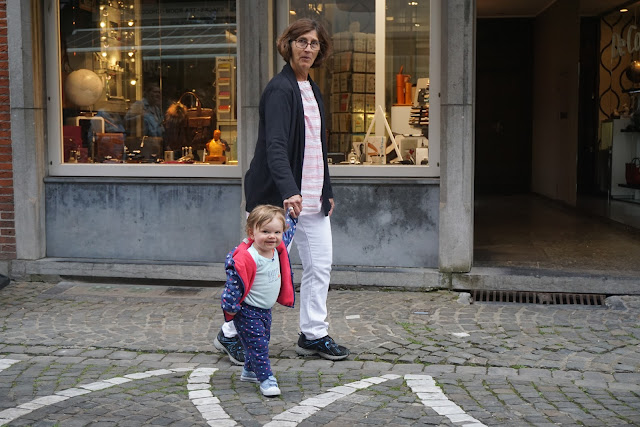 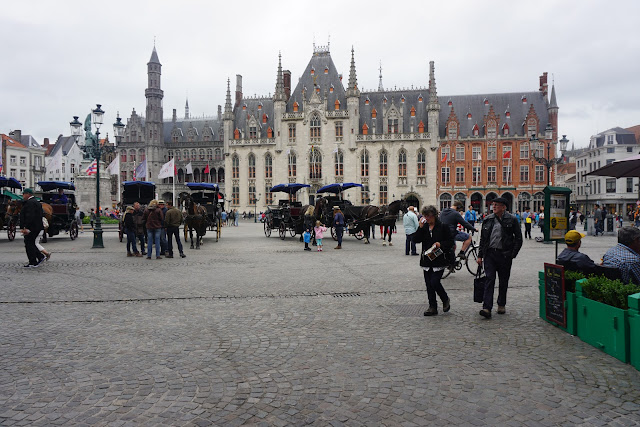 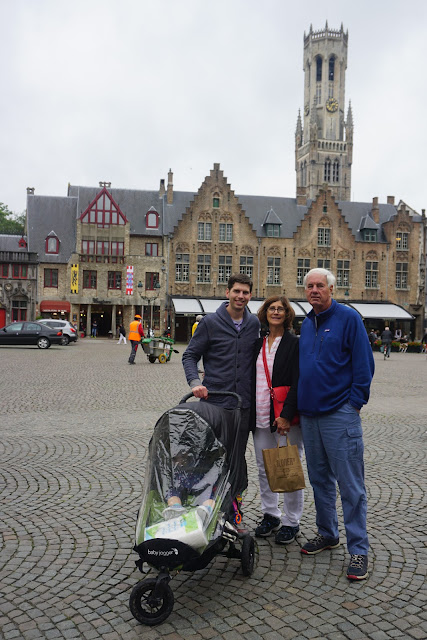 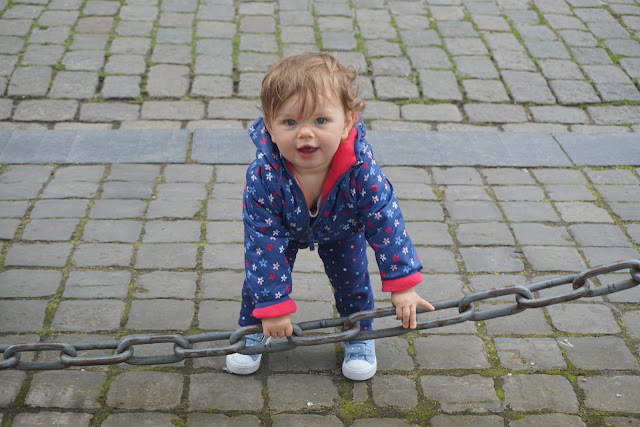 Toward the end of the day, we were all getting tired (except for Natalie) and just happened to find ourselves only a couple of blocks from De Halve Maan brewery (the only active family brewery in Bruges), so of course we had to stop.  I have heard mixed reviews about the brewery tour so we skipped that and just relaxed on their terrace while sipping some great local beer, their Straffe Hendrik quad (more serious than a dubbel or tripel style beer).

Saturday was Kristin's birthday!  The sun was shining so we decided to walk out to some windmills that border the main canal around the old town.  It was amazing to see how they were built to pivot in a circle to continue to capture the wind.  Twenty-five formerly surrounded the city, with many built in the late 1700s, while four survive today after having been rebuilt over the years. 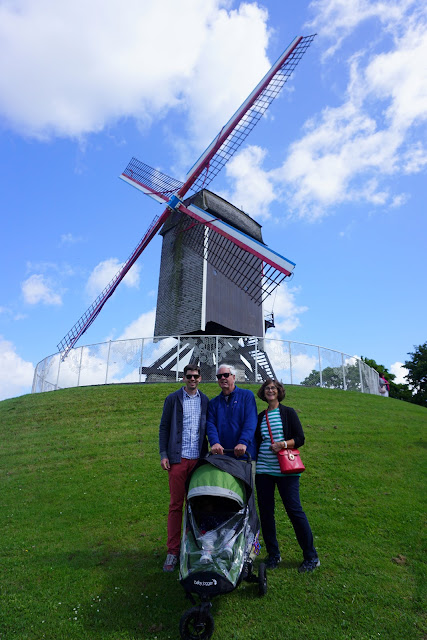 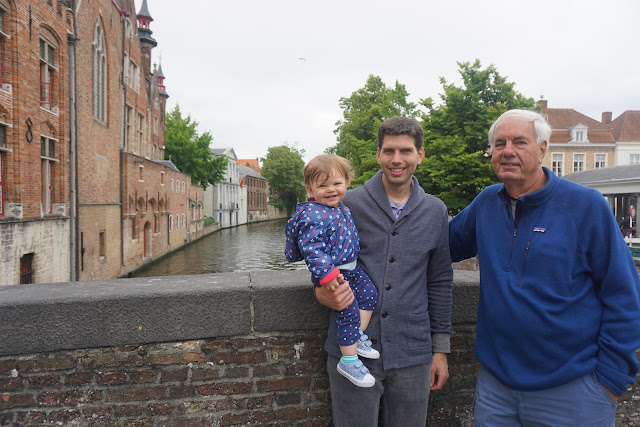 We then headed downtown for a delicious lunch at Cambrinus (awesome place!) before meeting a local guide and photographer from Photo Tour Bruges.  Kristin joked that it was a present to herself but the tour was great fun for everyone.  Our guide Andy showed us lots of forgotten corners of the city and helped Kristin learn about the best ways to capture them with her camera.  Get ready for lots more pictures... 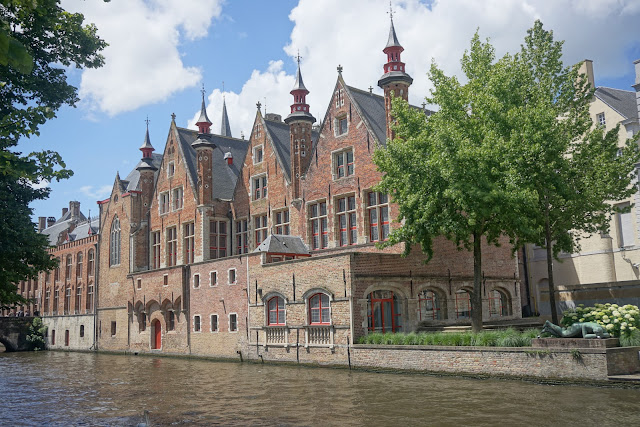 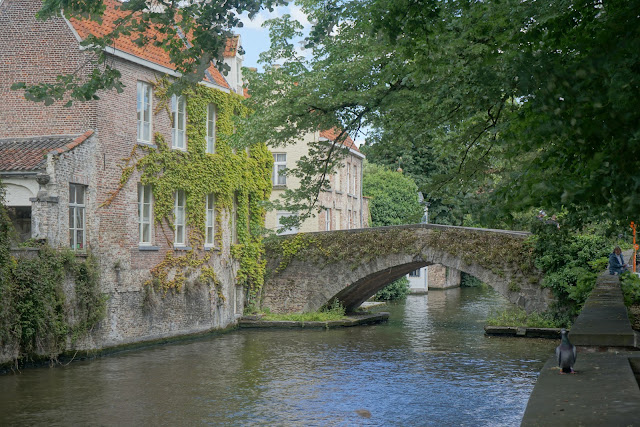 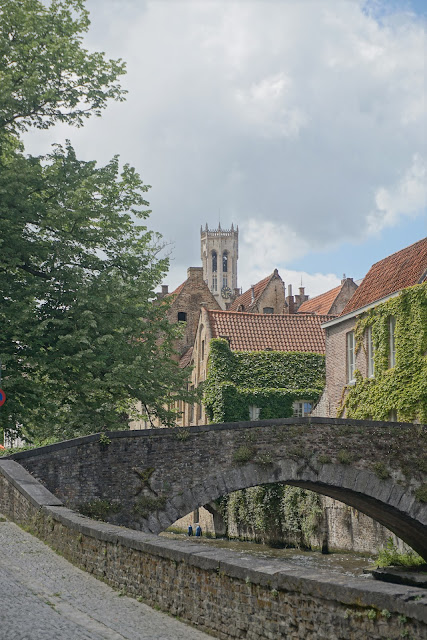 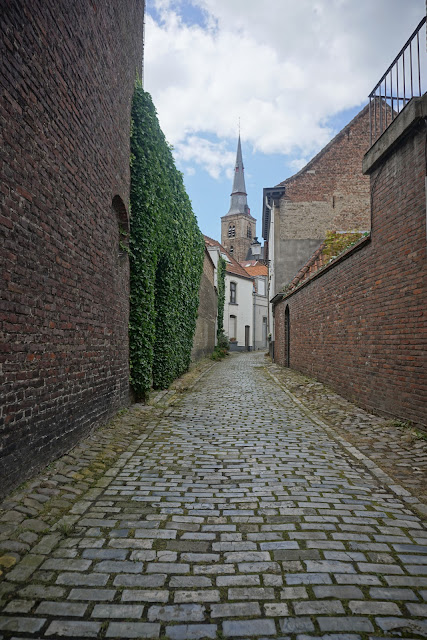 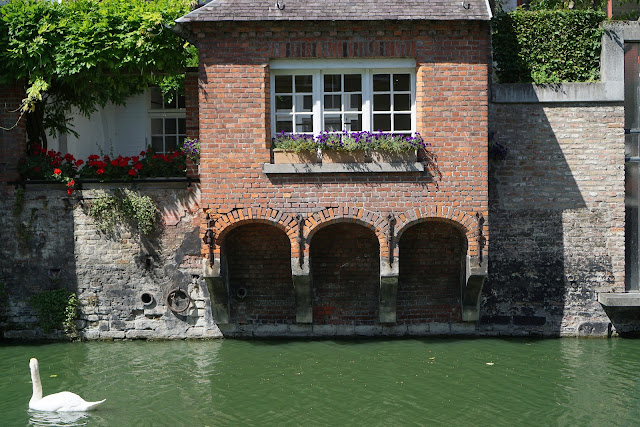 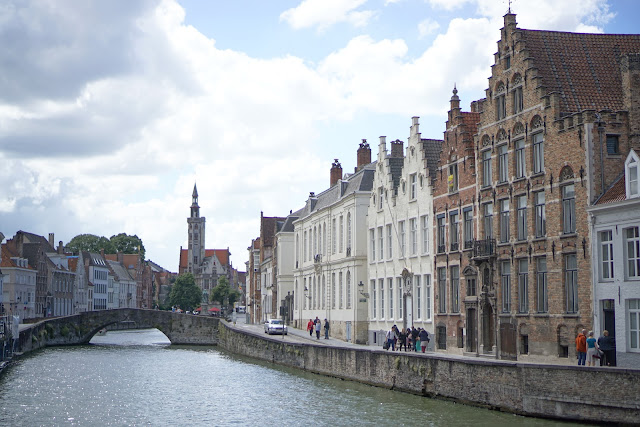 After another wonderful day exploring Bruges, we relaxed for happy hour on the patio of our place.

Kristin and I then headed out to a fancy birthday dinner, while Natalie went to dinner with her grandparents.  We don't use many babysitters in Stuttgart so we really appreciated the night out. 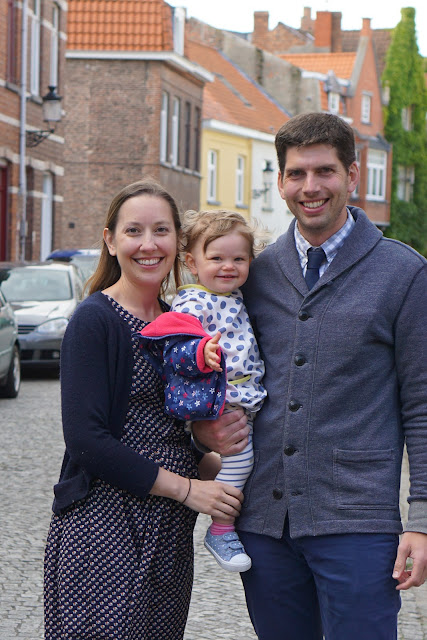 The next day we hopped a train south for about 30 minutes to Ghent.  While a little bigger and more diverse than Bruges, it also has many amazingly old buildings and embraces its waterways.

We started in the center of town, craning our necks to admire the medieval belfry that is actually the tallest in Belgium (take that Bruges) and was originally built in the 1300s.  Across the square from it is Saint Bavo's Cathedral, which we got to tour the inside of (unfortunately no photography is allowed).  The frescos were amazing, but I think the basement was even more interesting, where you can even see remnants from the wooden Chapel of St. John the Baptist that was built in the site in 942.  Not a typo...942!

The other prominent church is Saint Nicholas' Church, which was built even before the belfry in the 1200s out of blueish stone from a river in western Belgium.  It still stands in the trade hub of downtown Ghent. 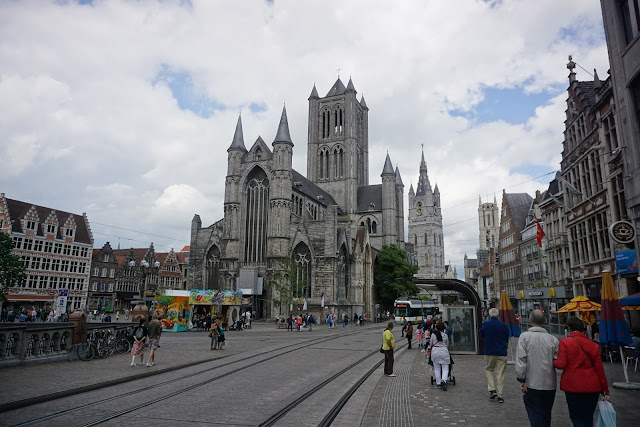 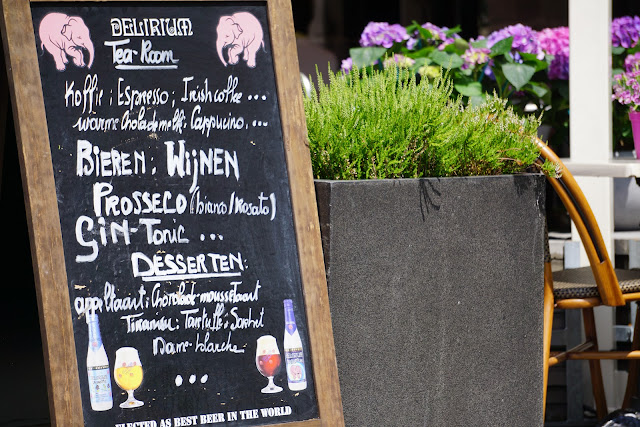 Just when we didn't think it could get any more medieval, we came across the Gravensteen.  It's an incredible castle from the 1100s that gives a great sense of how intimidating such a structure was in the middle ages.  Natalie was asleep and we were running short on time so we decided to save a tour for the next time we're up that way, which I hope isn't too far off. 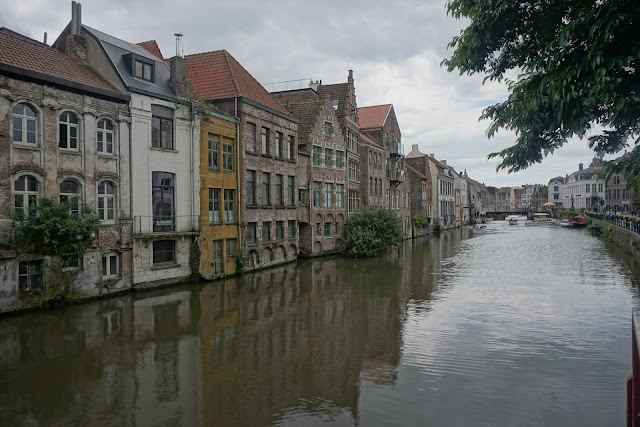 Of course when she did wake up, Natalie got to experience her favorite part of Ghent...her first trip on a carousel. 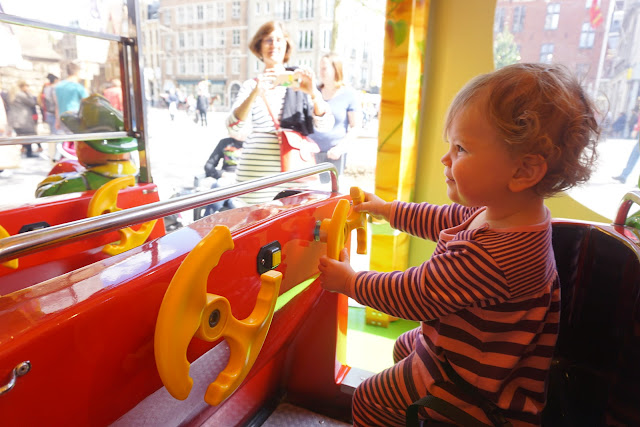 Despite pouring when we first arrived, we were lucky to have great weather the rest of the day and really enjoyed our side trip.  I could have spent a couple more days in Ghent, and hope to at some point, but I'm glad we spent the bulk of our time in Bruges.


Feeling ambitious for our last day, we packed up our suitcases, left them in a locker at the train station, and rented bikes to pedal out to the countryside.  It was fun (and flat!) following the canals and enjoying the scenery.  We even got caught at a drawbridge waiting for a barge going through a lock, which was pretty cool to see.  From the number of barges we saw around the city, this must be a frequent excuse for drivers arriving late. 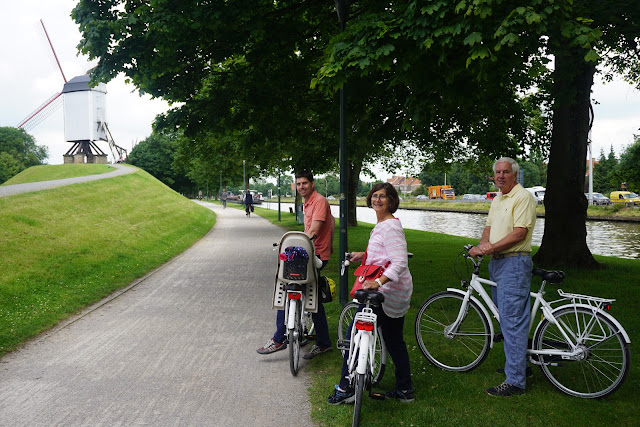 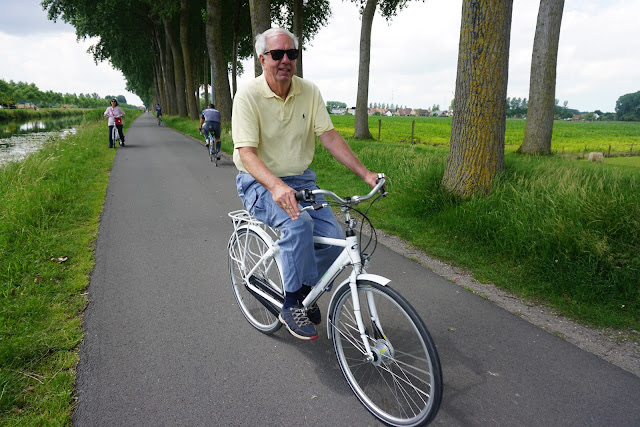 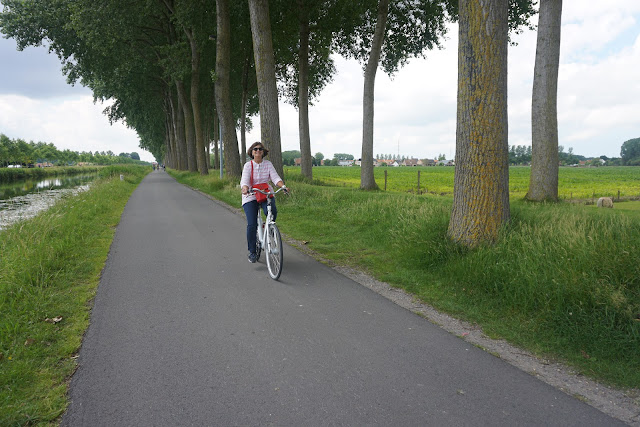 According to Mom, we rode at least 73 miles to a cute little town of Damme, about halfway between Bruges and the Netherlands border.  Again we really lucked out with the weather, perfect for such an activity. 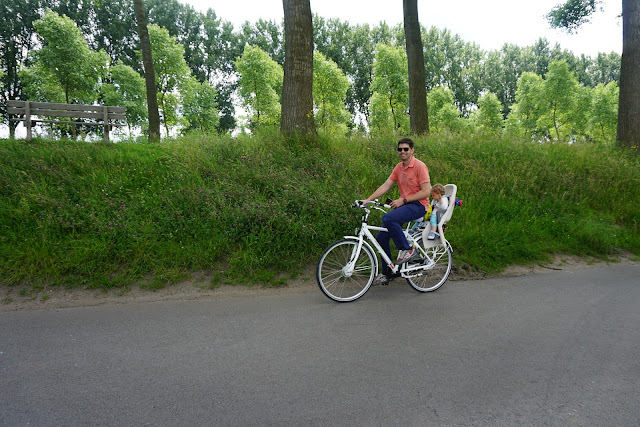 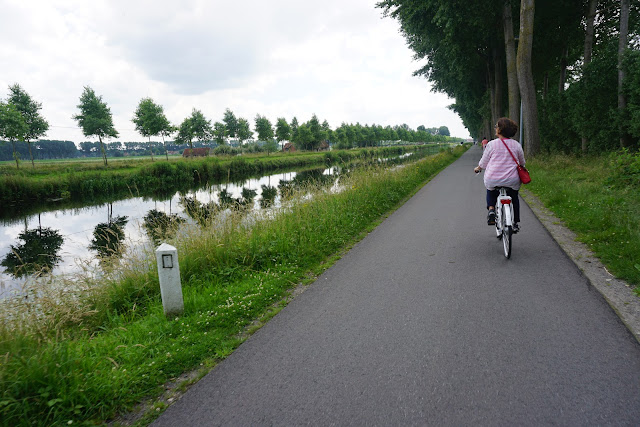 While not anxious to leave Bruges, some of us were happy to return the bikes.  We then gathered our luggage and hopped on the train for a relaxing ride back to Stuttgart.  Luckily (and by design) we had enough of a layover in Brussels that I was able to run to the supermarket down the street and grab a few more beers, which are the best souvenirs.
Posted by matthendren at 12:28 PM