The only thing Kristin seems to love more than seeing new places is showing me places she has been and I haven't.  When the opportunity arose at work for me to spend a couple of weeks in Las Vegas, she had her passport in hand and was ready to go too.  It was her fourth trip but this would be pretty different than the typical long-weekend of gambling and buffets.

We were fortunate to not have any trouble with the flights and only one stop in Chicago.  Flying west is great because it just feels like a long day that you get to relax and catch up on movies while someone brings you food and drinks.

My first impressions were mixed.  The strip was full of lights, people, and activity but very little of the glamor that I had hoped for.  For every snazzy casino, there were 10 chain restaurants; for every nicely dressed person, there were 10 groups of silly drunks; and for every classy show that was advertised, there were 100 people handing out ads for peep shows or escort services.

Then again, the spectacle of it all was still alluring.  I couldn't help myself from taking pictures of many of the sites that were so familiar after watching movies like The Hangover and Ocean's Eleven. 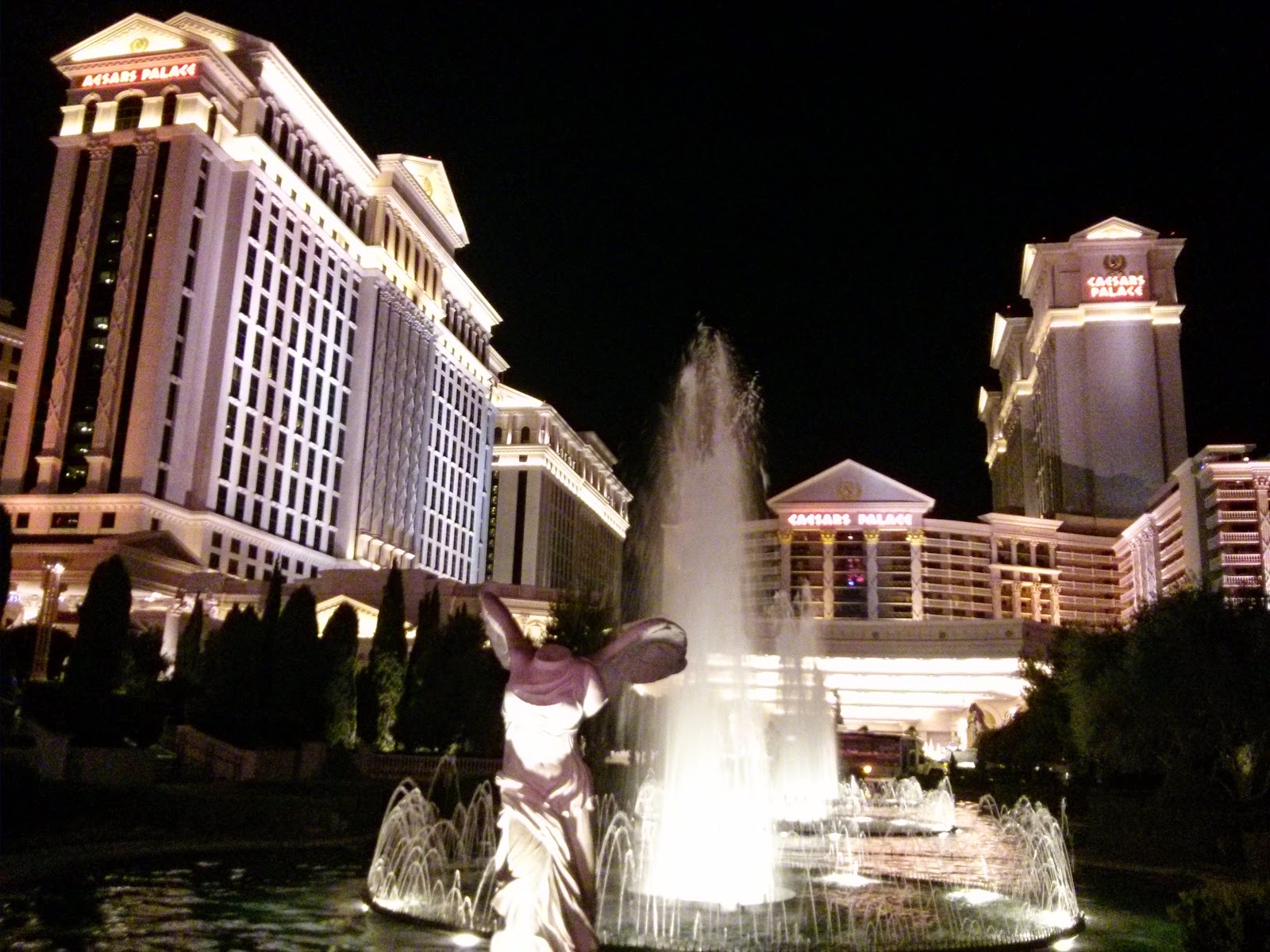 I wanted to see two shows during our visit and the first was Penn & Teller.  I have always been impressed with their acts on TV and enjoyed stories written about them (like this one).  They seem like a quintessential Las Vegas act that I would probably not have another chance to see in my life.  For all of these reasons, Kristin and I, as well as some of my coworkers, headed across the interstate to the Rio and saw this dynamic duo.  Their tricks were as amazing as I had hoped, even after seeing a few on TV and having read about others.  These two truly have made a mastery of illusion.  The only downside for me was Penn got even more preachy than I had expected.  I appreciate the humor of a pocket-sized metal Bill of Rights that will trip the airport security but he wove his views into nearly every narrative.  That being said, they clearly love what they do and it impressed me that they still put plenty of effort into it after so many years.  I was blown away that at the end of the performance they came out to the lobby to take pictures and sign autographs with every single fan that was willing to wait in line for 20 or so minutes.

The second thing I wanted to see was a Cirque du Soleil performance.   One of their traveling shows had visited DC but I had always waited to see them in Vegas.  While we were there, five shows were concurrently going on.  I don't have much interest in Michael Jackson or The Beatles so "The One" and "Love" were out.  "Ka" had recently had a performer die so the grand finale was a video instead of the live performance...also out.  "Zumanity" is "the first adult-themed Cirque du Soleil show" so not really one I wanted to see with coworkers.  And that left "O".  The show just blew me away. From start to finish it was chalk full of things I still can't believe humans can do, especially synchronized so well and on a stage, in the air, and in the pool that covered most of the stage most of the time. The performance was incredible and more amazing than any act I have ever seen.  It was the magic I was hoping to find in Vegas.

Speaking of spectacles, our one day off work was the Saturday after Halloween so we got to cut loose that night and enjoy the town. Our first stop was Downtown Container Park, (Zappos founder) Tony Hsieh's attempt to incubate small businesses in the forgotten downtown part of Vegas a few miles north of The Strip. It is full of shipping containers converted into businesses offering low rent and high traffic to budding entrepreneurs. Some are restaurants or bakeries, some boutiques, and others art galleries.  It's all a couple of blocks down Fremont Street from the former center of town, still hosting the likes of the Golden Nugget and Binion's casinos.

After some much better BBQ than we can find in Germany, we checked out the parade that was staging on Fremont Street and included amazing art like this guy:

Fremont street itself has done a lot to continue to attract crowds, including a cool pedestrian mall with LED ceiling.  As you can imagine, everything was pretty packed for Halloween and we saw lots of crazy costumes. The group favorite was a homemade Inspector Gadget complete with red revolving light on his hat and a robotic arm extending out holding a magnifying glass.

The problem with the old casinos is their ceilings are lower and ventilation systems aren't great, so they get thick with cigarette smoke. Kristin is not a fan.  After enough of downtown, we headed back to the strip and checked out the Luxor. While old by The Strip standards, I still thought it was a pretty cool concept, though incredibly inefficient to have all of the hotel rooms built into the edge of the pyramid, leaving the inside open. After a fun night (maybe a little too fun for the guy that got a yard of banana daiquiri in the group), we retired to the hotel and looked forward to the much needed day off.

It was wonderful to not to have to report to work at 6:30 the next morning and instead get to enjoy breakfast with Kristin. After a few errands, we struck out toward the Hoover Dam because Vegas Vacation made the damn dam look pretty cool. First we did some walking along the path that was built to bring supplies from the nearest train tracks to the dam site during construction. There were several signs along the way to explain the incredible feat it took to design and build. It followed the shore of Lake Mead so we also got a feel for the reason the dam was built, though being a cloudy November day there wasn't much activity on the water. Wikipedia tells me it's the largest water reservoir in the U.S., so that's fun. 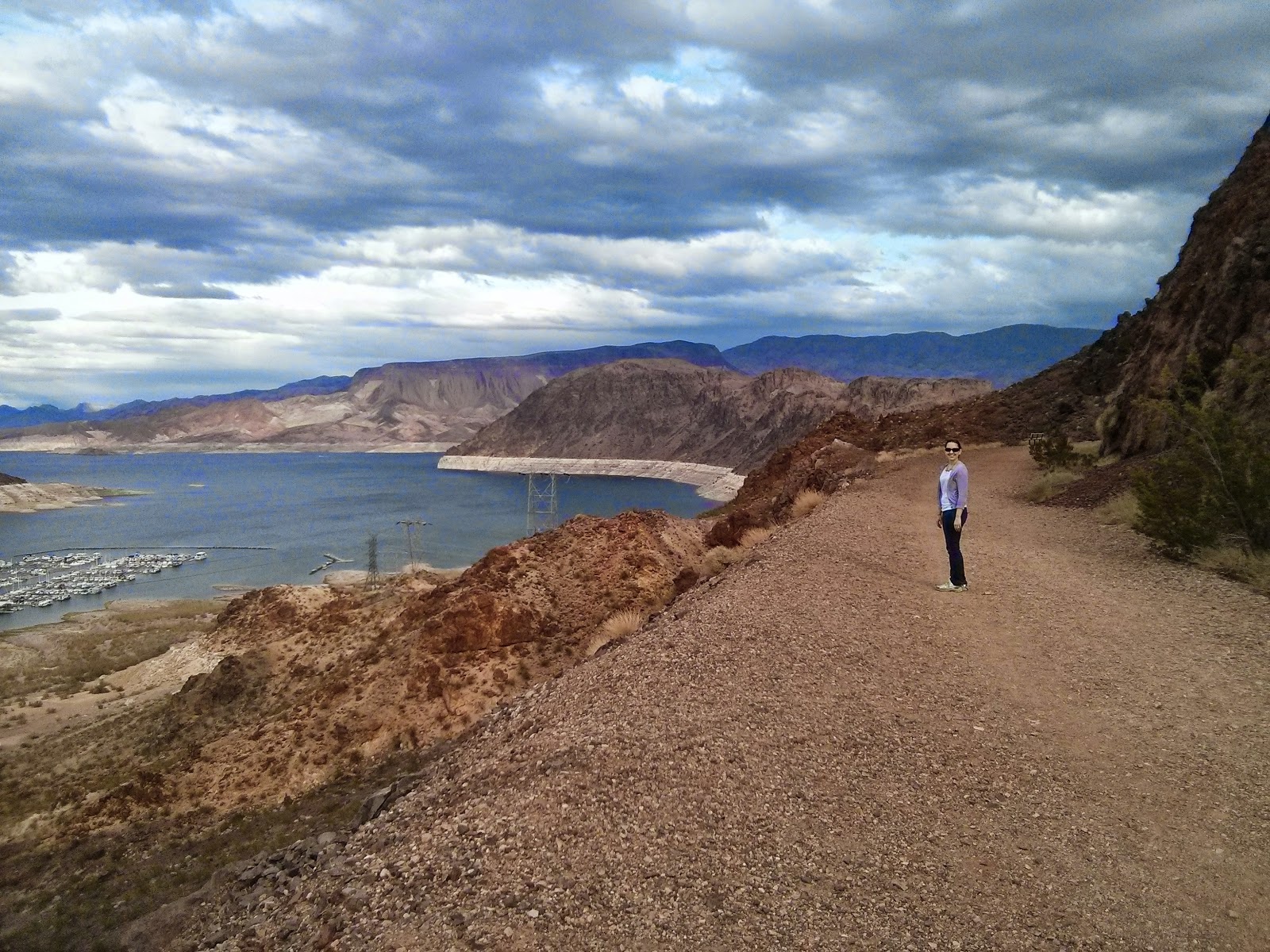 After the hike, and looking for some bait with Cousin Eddie, we drove to the dam and checked it out. $60 seemed a little steep for the guided tour so we just walked around and Kristin told me what she could remember from her tour 20 years before, and what she could find on google. 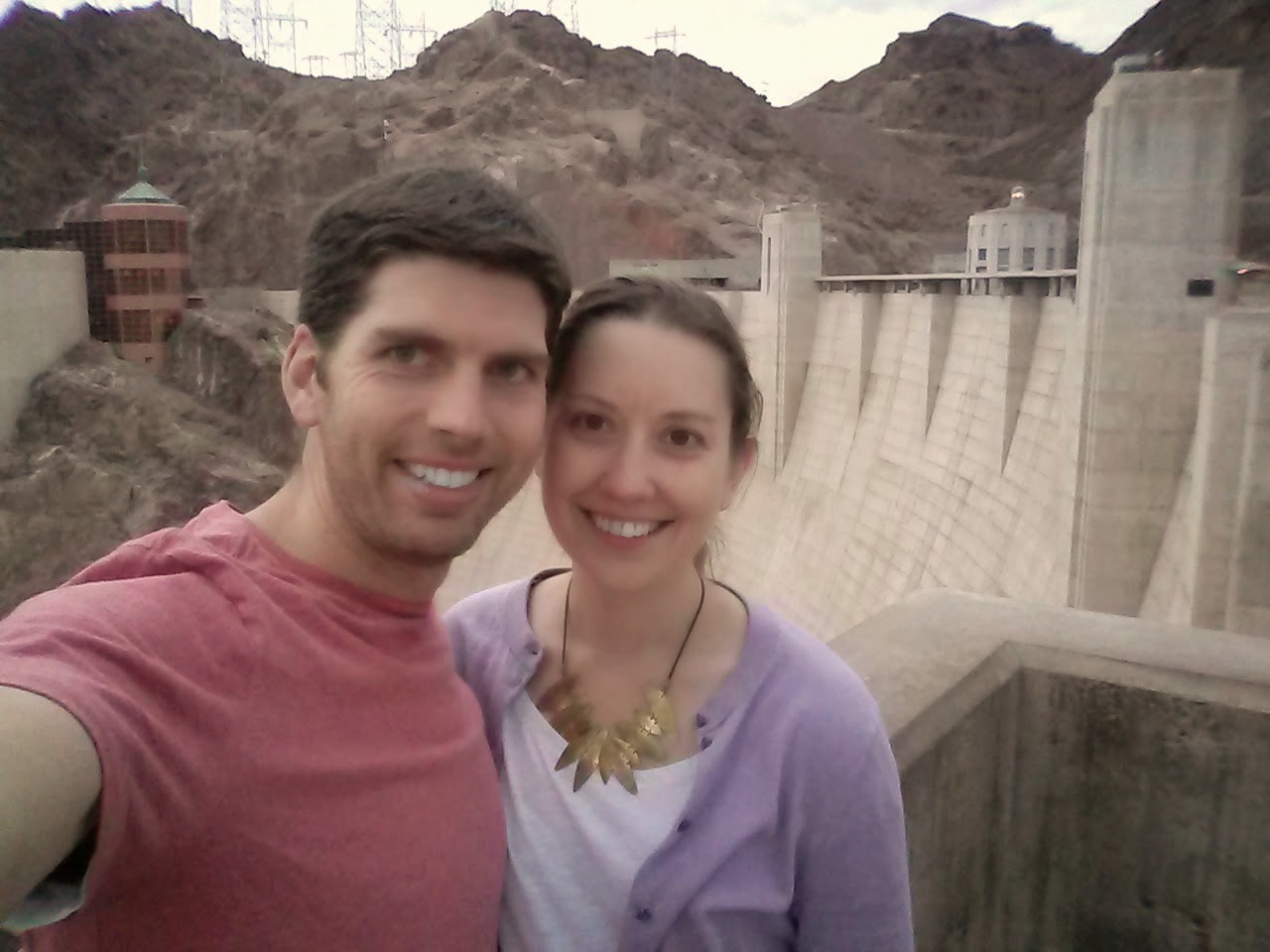 I was surprised to find that the road across the dam just dead ends in Arizona after a small gift shop and some massive parking lots. The Pat Tillman memorial bridge now handles the highway traffic so the area is much better for pedestrians. And it allowed me to visit my 40th state.

The next day it was back to work and we continued through the week, finishing midday Friday. That afternoon there was a rehearsal for the weekend's air show at Nellis so we went to check it out. I was blown away that Kristin had never been to an air show before and amazed she shared my enjoyment watching the Thunderbirds as the main event. They are headquartered at Nellis so I think there must be additional pressure to put on a good show, which they did. It's easily mocked as a silly way to promote patriotism but I still enjoy and respect those pilots (and planes) do such cool maneuvers. Being out in the desert all but ensures great weather for it, and all of the smoke in the sky has come from the planes. 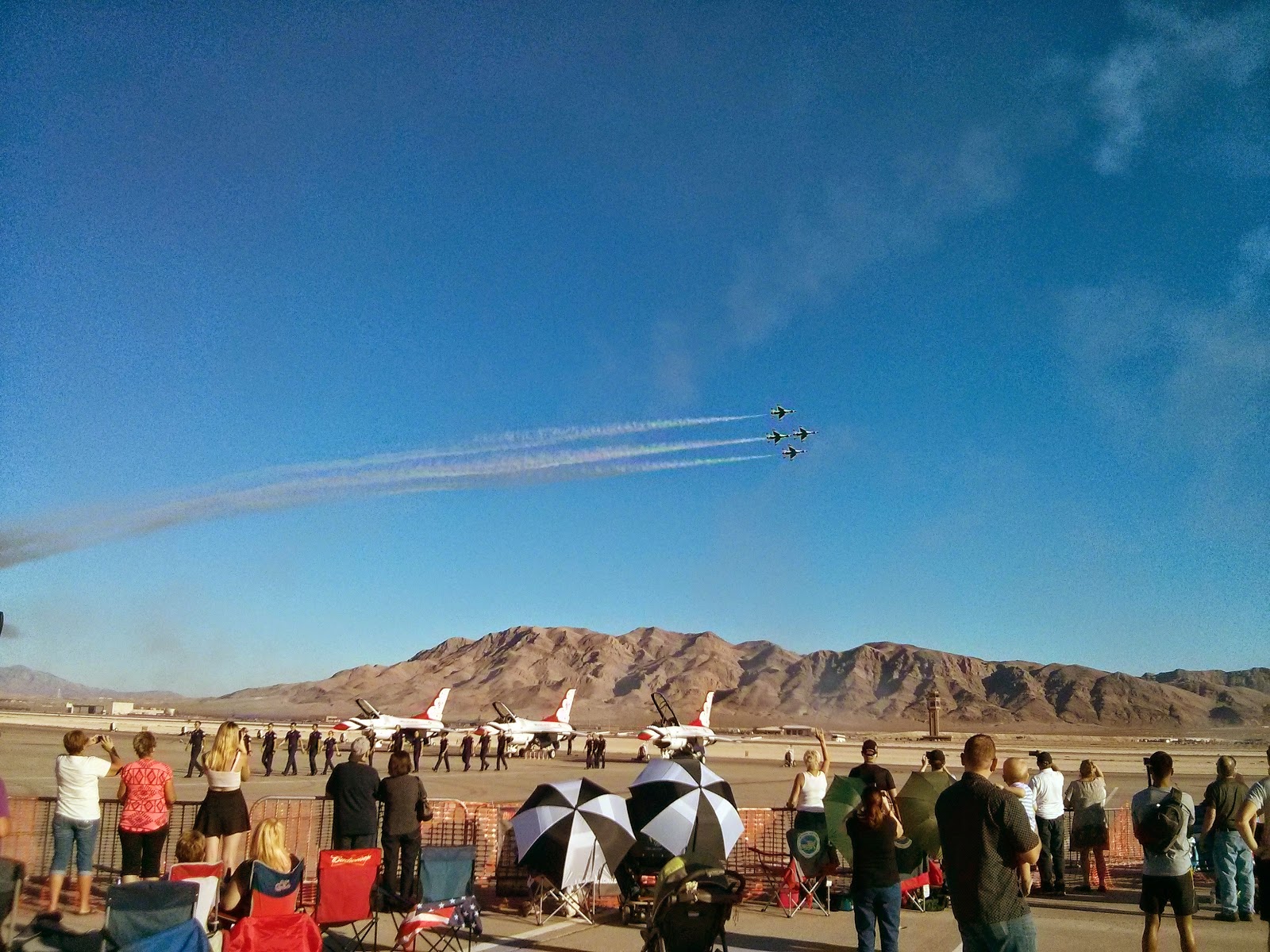 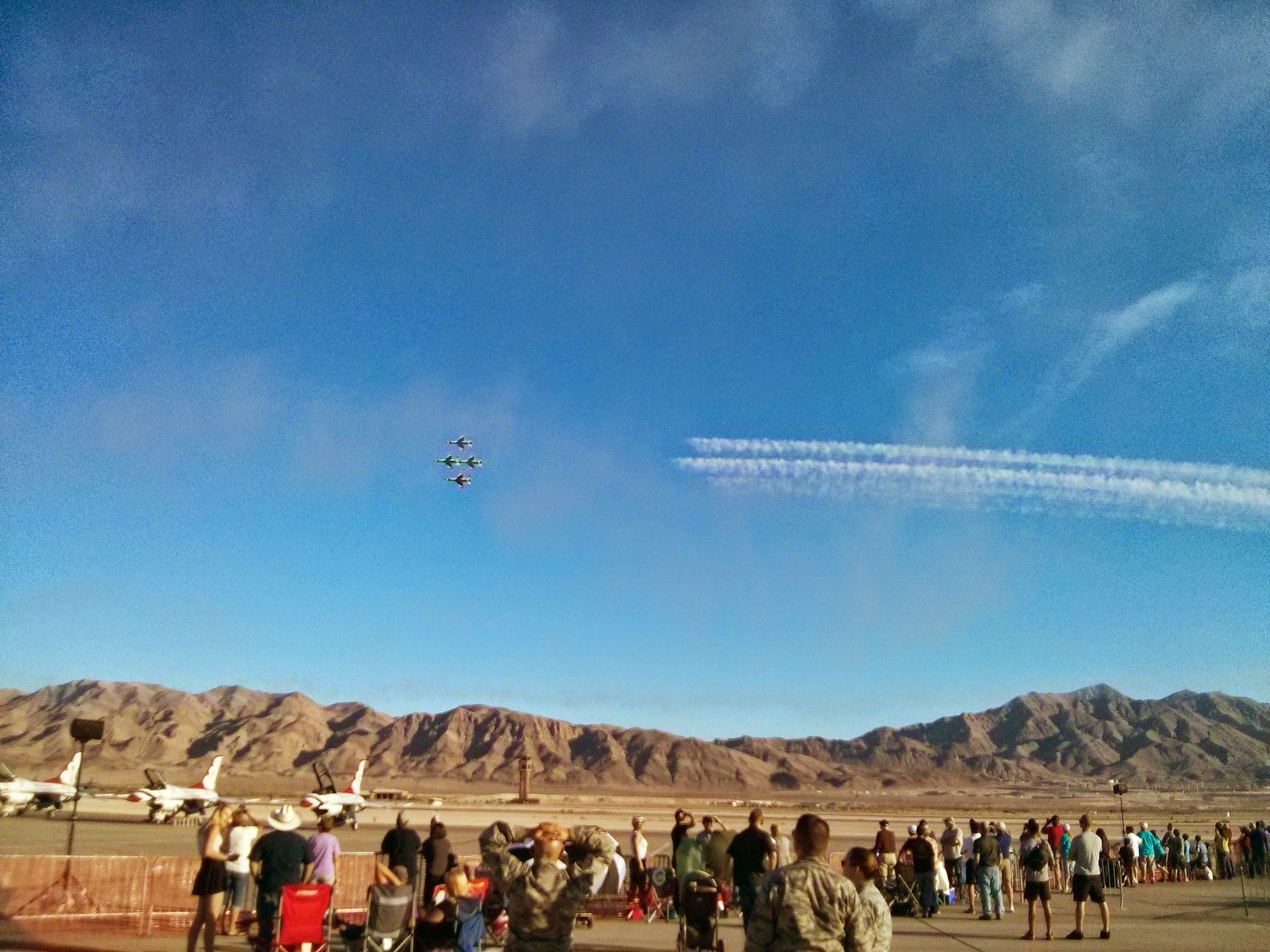 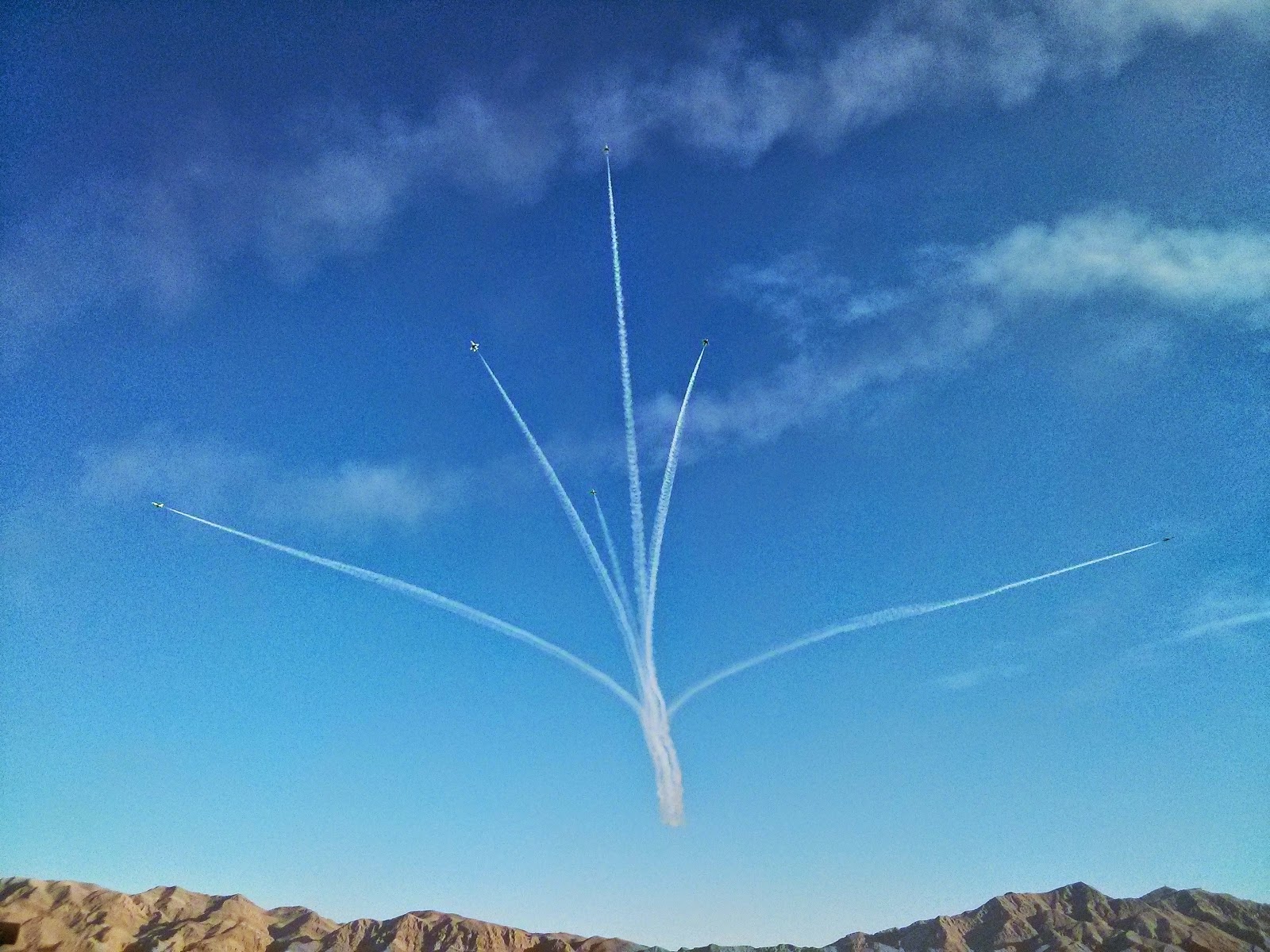 I then got nerdy checking out some static displays and giving Kristin the company line about America's two fifth-generation jet fighters (F-22 and F-35), both built by Lockheed Martin. There were a few active and retired pilots showing their kids around the planes they flew. I hope they didn't mind how much eavesdropping we were doing because they know lots more than I ever will and have great stories! 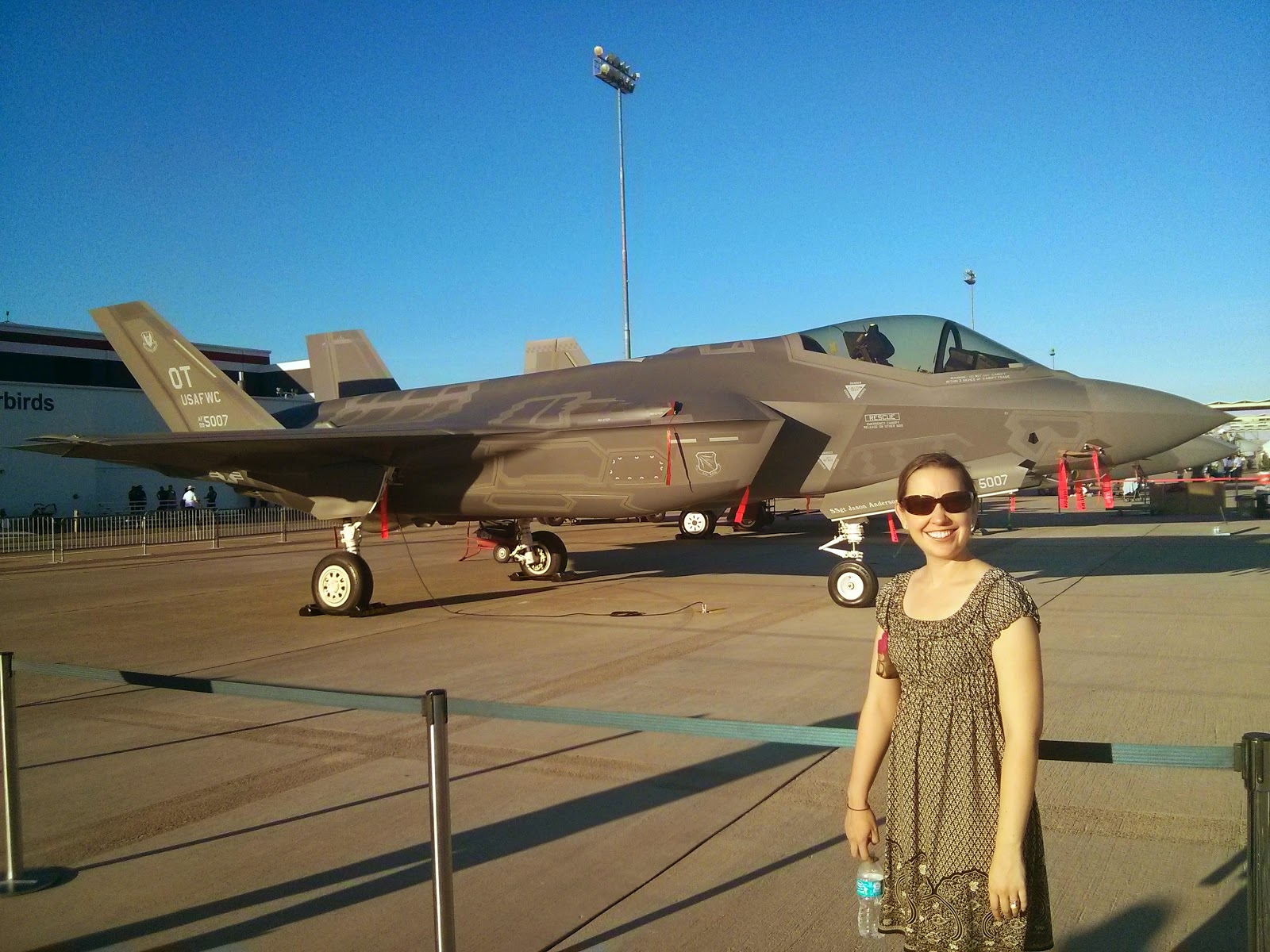 Knowing I would be so busy during the week, we decided to stay an extra weekend and relax a bit more before heading home. Kristin had been a real trooper living and working out of the hotel while I was up early and gone all day. On top of that, she was queasy with the early stages of pregnancy but it was still too early to tell my coworkers and get some sympathy, so she tried her best not to dry heave walking through smoky hotel lobbies and casinos. As a treat for her, we moved to the Bellagio and lucked out with a great room for the last couple of days. 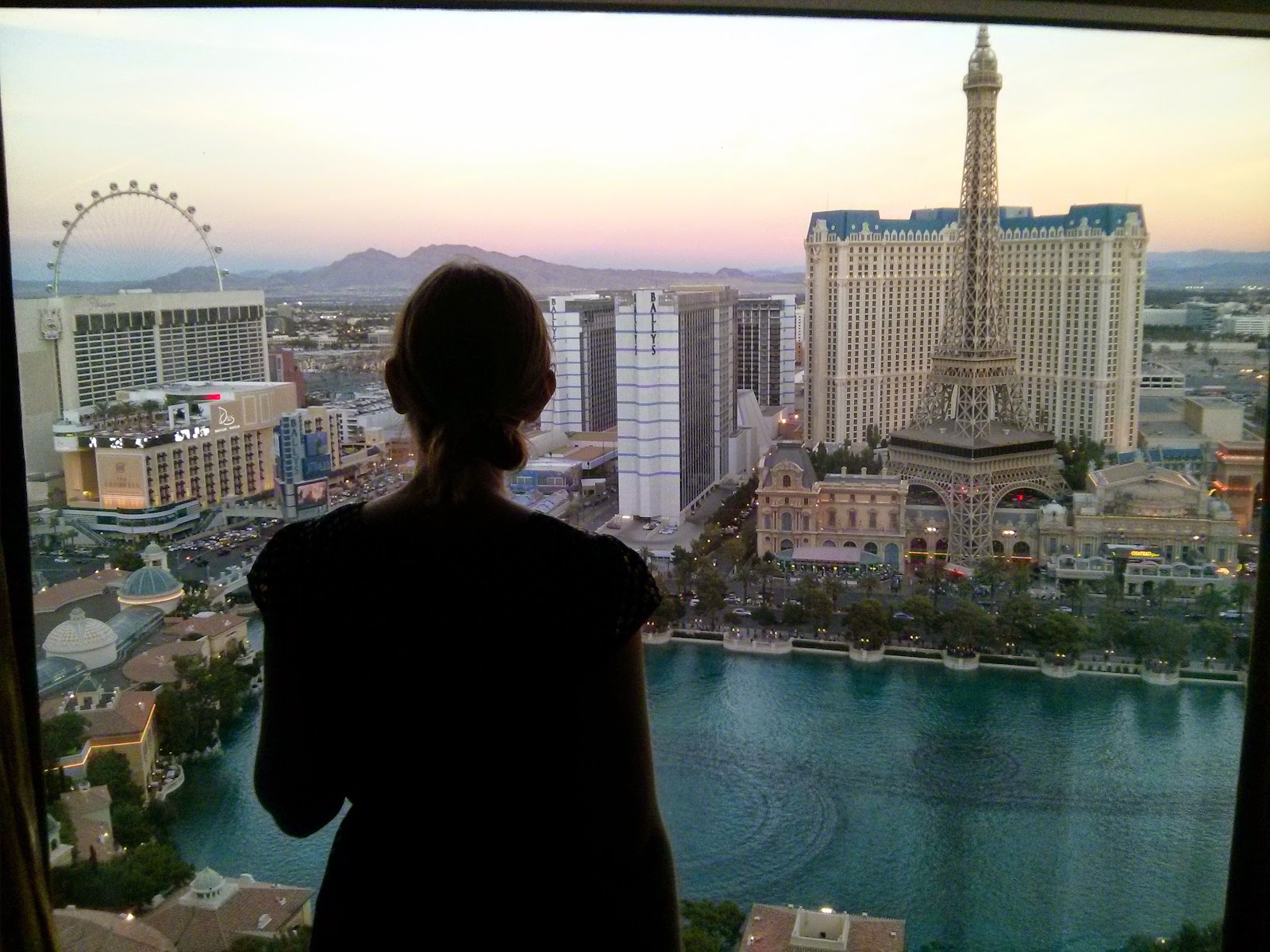 For our last day we again headed out of town to enjoy the outdoors, this time hiking in Red Rock Canyon, thanks to my friend Chad's recommendation. It was a beautiful day and fitting finale to the trip. 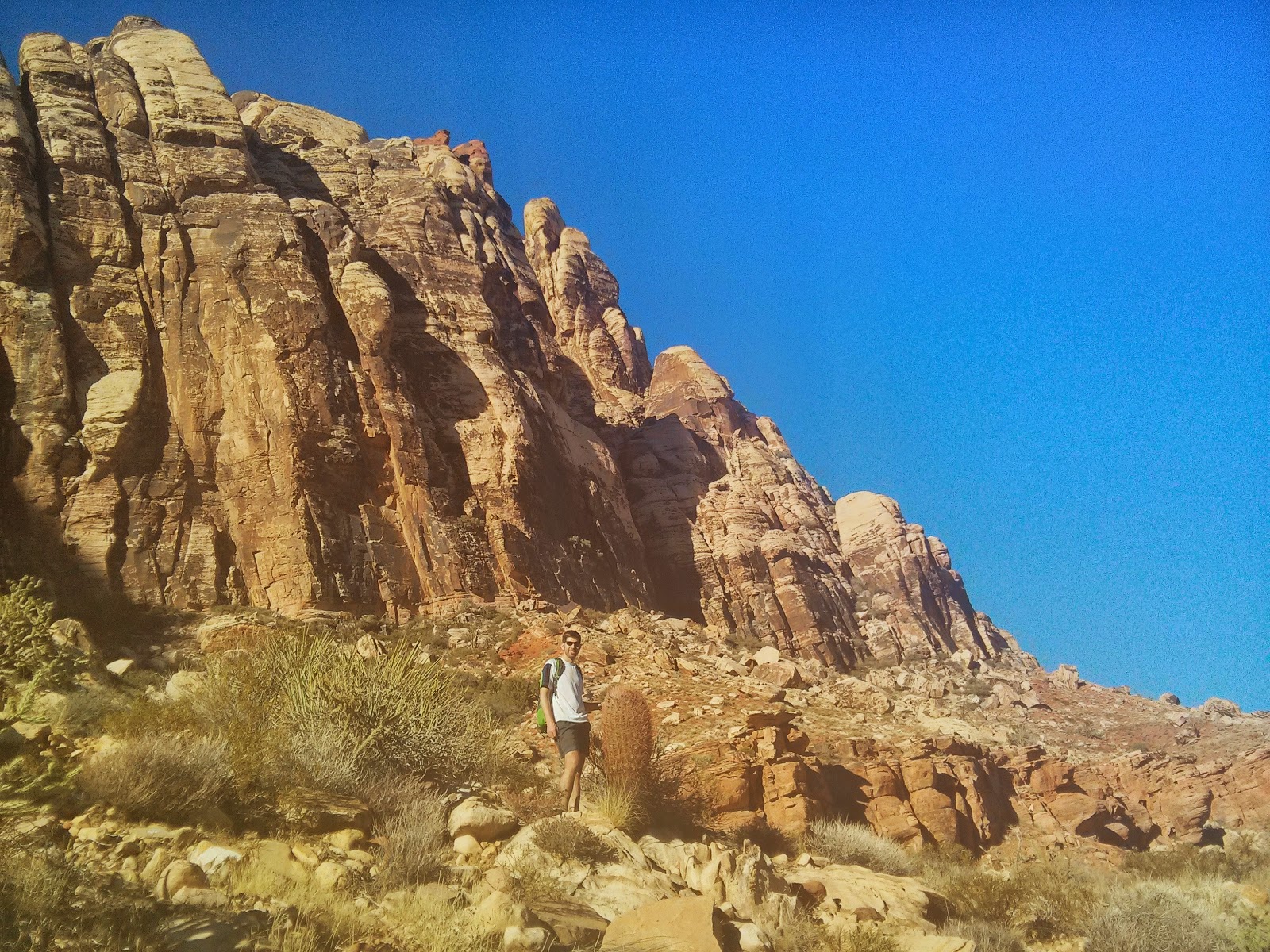 Posted by matthendren at 7:58 PM