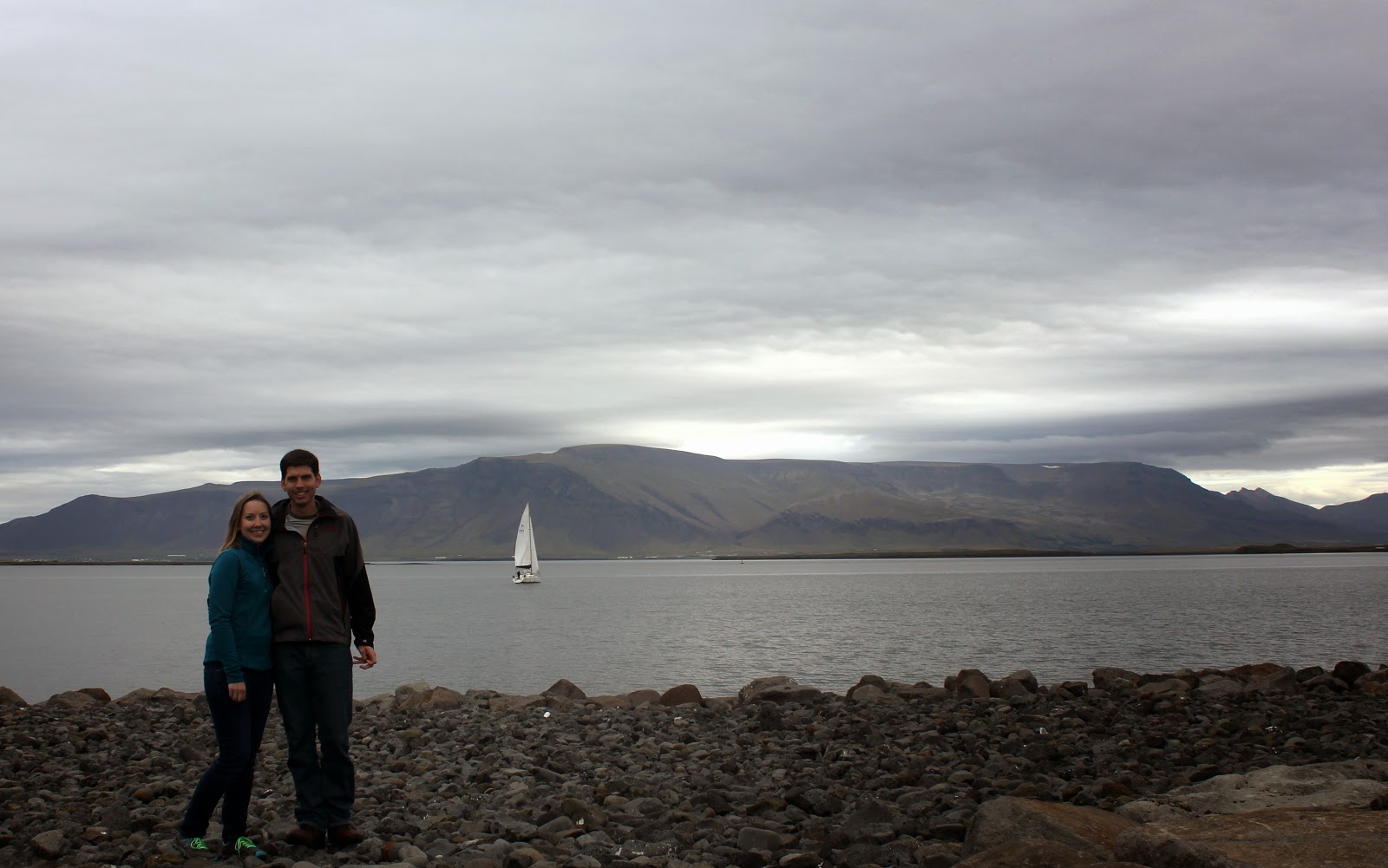 When Abby and Jack decided to make a stop in Iceland on their way to visit us in Germany, it took us about 2 minutes to agree to meet them there for a quick weekend trip.  We found a super cheap flight to Reykjavik, but it meant arriving 2 days before them.  So we had a few days to explore on our own.

We spent our first few hours checking out the town of Reykjavik, and most importantly a delicious bakery (Sandholt) that Kristin found on the main shopping street.  The town was small, but well-kept and filled with cute stores for window shopping. There is a new arts center on the harbor and a church that is the architectural  centerpiece of the town.

After filling our tummies with pastry, we headed north toward the Snæfellsnes Peninsula (which Kristin called the Snuffleupagus Peninsula the entire time).  We chose to take the long road there (avoiding a tunnel) and were rewarded with a beautiful drive full of amazing and diverse landscapes. 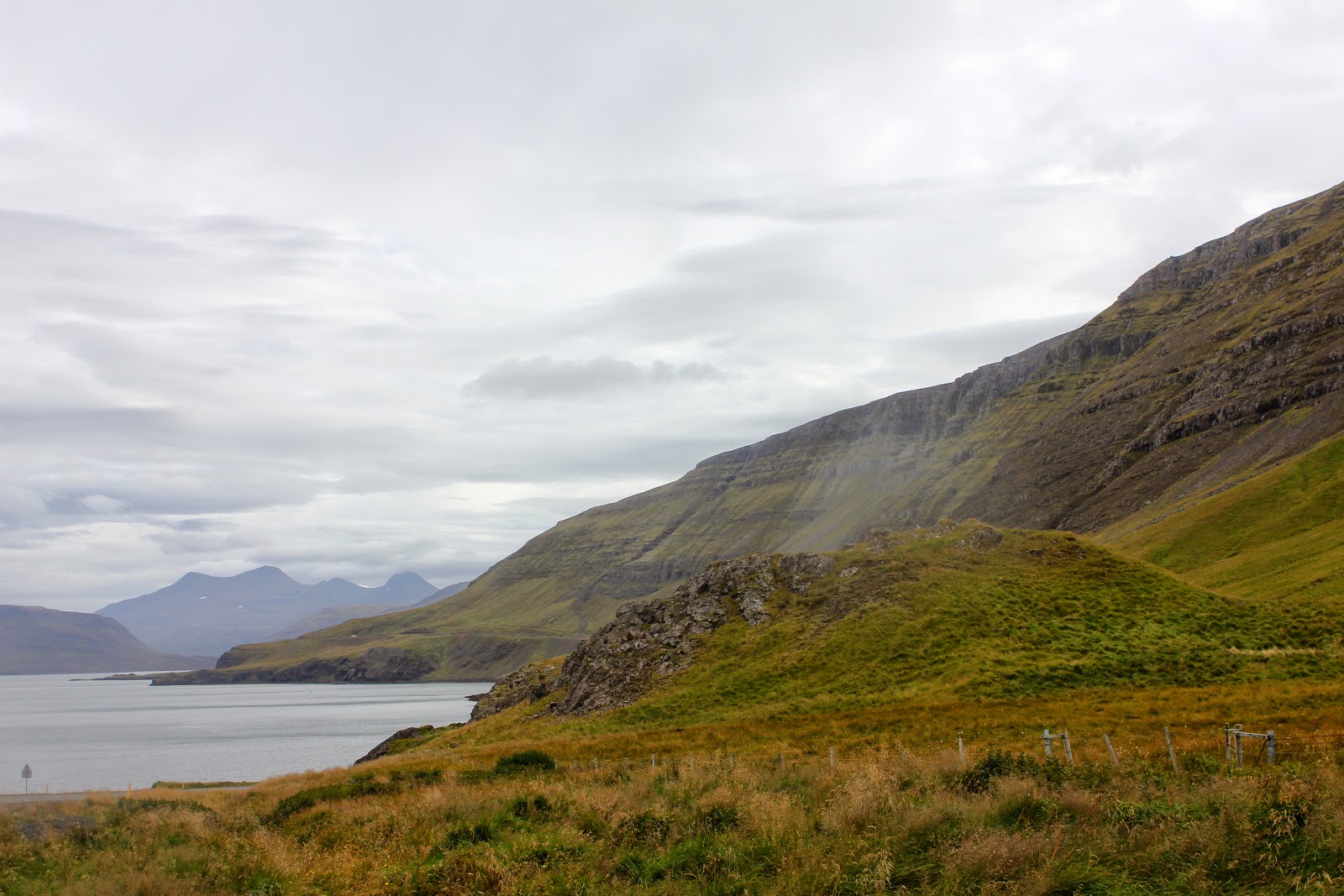 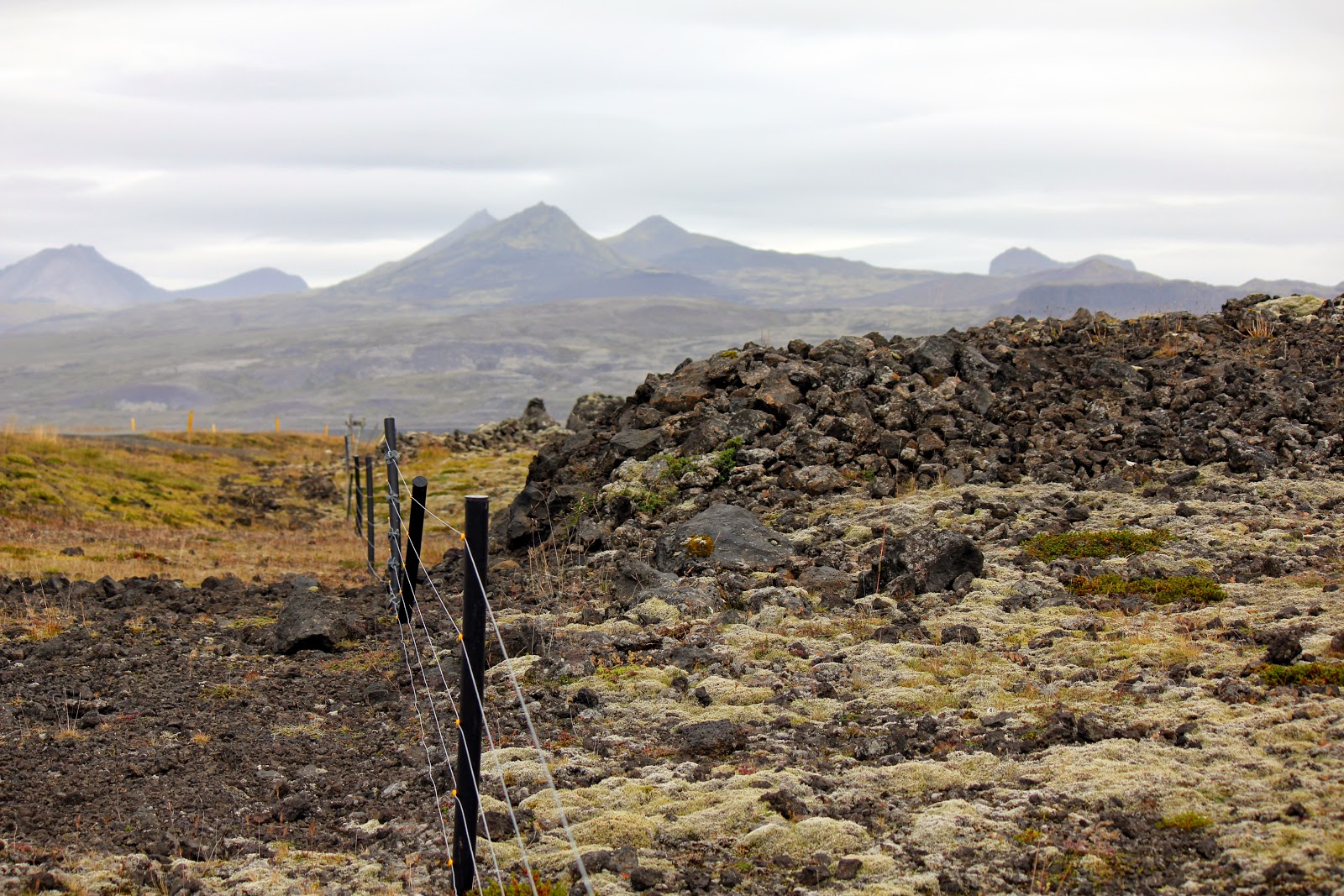 We stopped along the way at the cute town of Borgarnes for lunch at the restaurant at the Settlement Center.  (We learned quickly there are not a lot of food options in the off season, so when you see something good, you eat!)  The restaurant was fantastic and was located in the oldest surviving building in Iceland.  Like every place you ate in Iceland, they filled us with delicious bread and yummy Icelandic butter in addition to a fabulous meal. 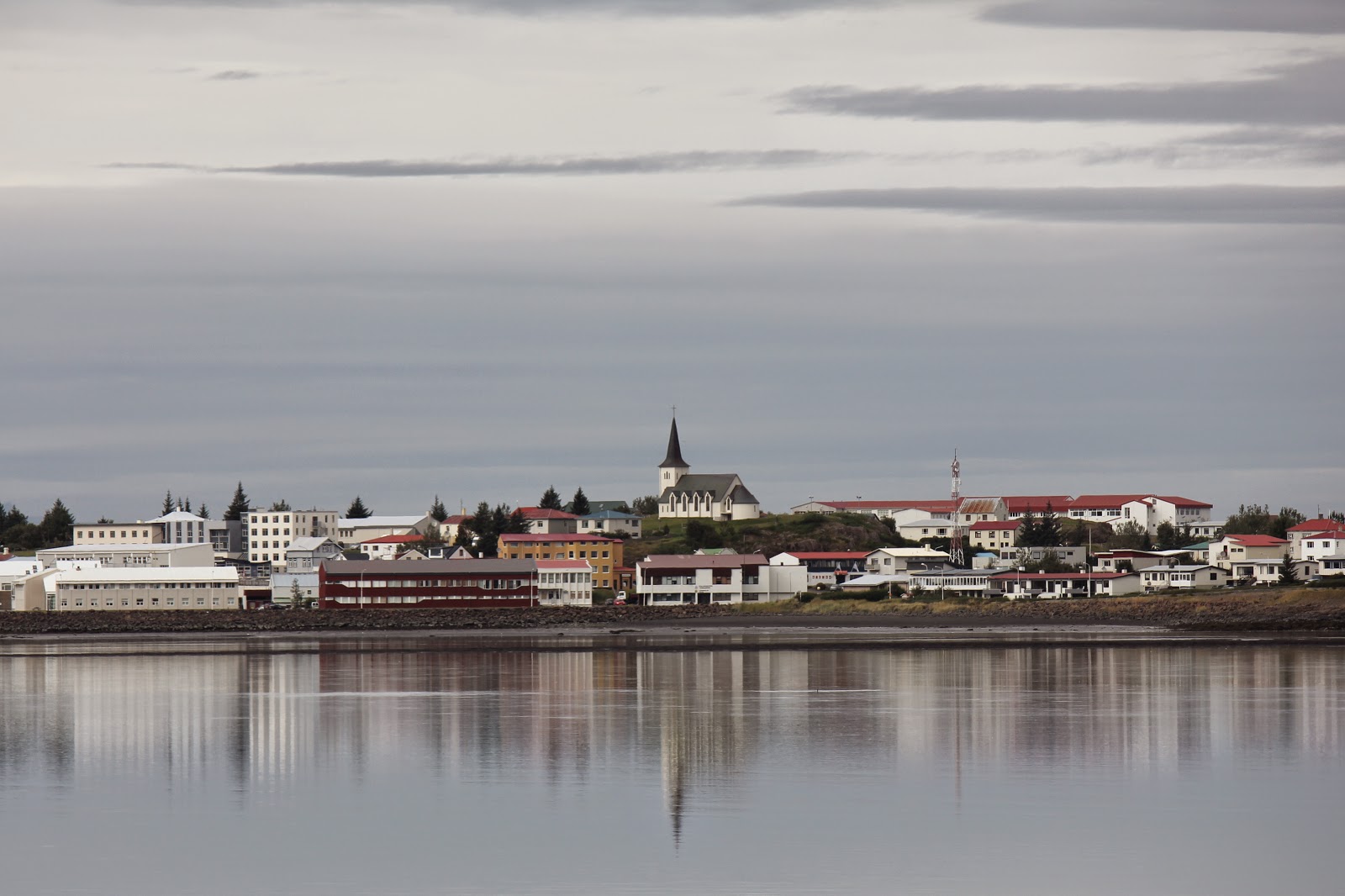 Along the peninsula was an area known as a playground for seals, so we decided to take a quick look.  After about 20 minutes of searching, we were ready to give up.  Then we realized that all the lumps we thought were rocks in the water were actually just really big seals.  We decided to walk in that direction to get a closer look.  The seals got a bit too inquisitive for us after a few minutes and started to follow us along the rocks, so we took off in a hurry. 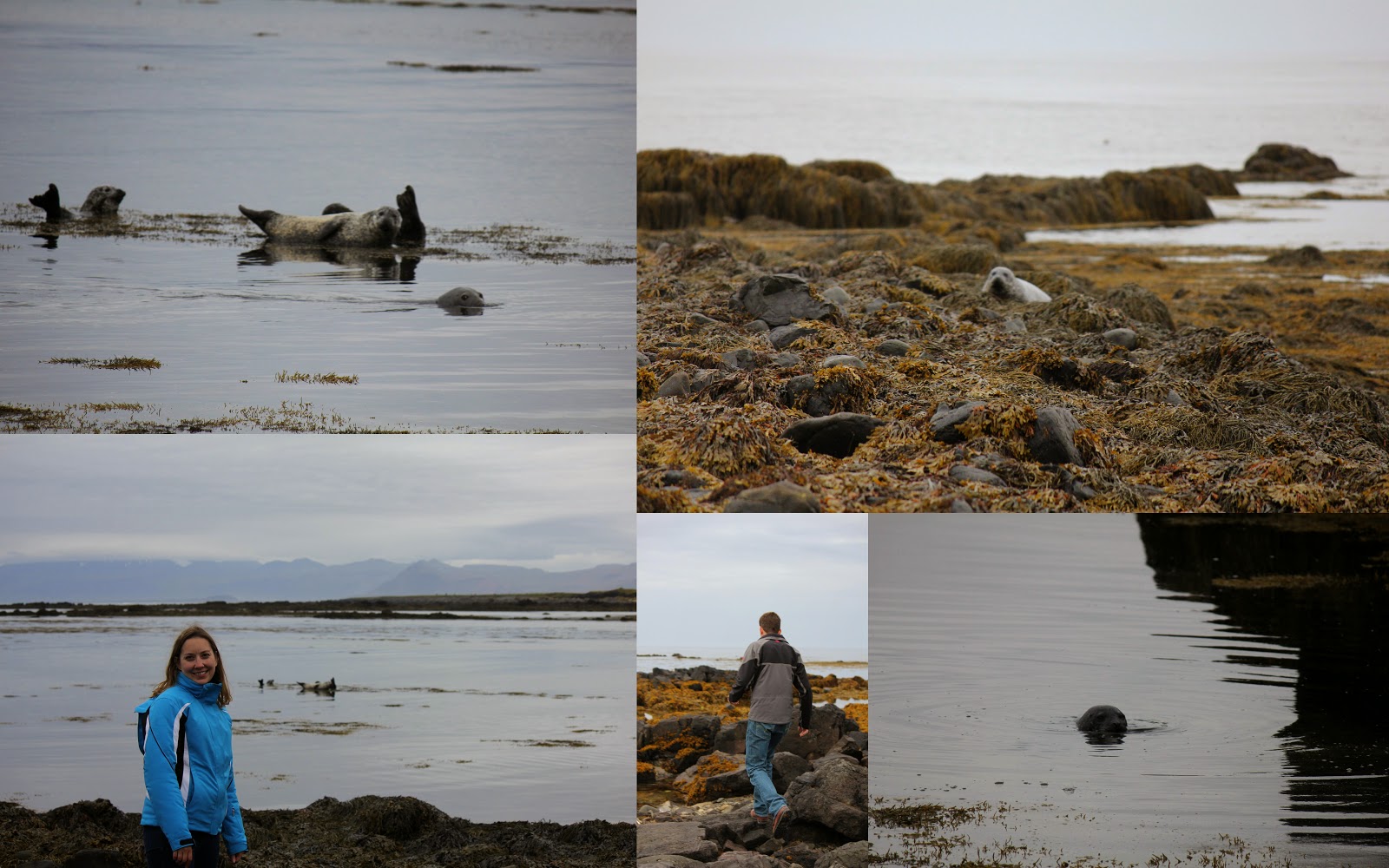 Our last stop of the day was at a natural mineral spring that was bubbly from all of the minerals and left the surrounding soil red because of the iron in the water.  Matt was excited to fill up his water bottle. 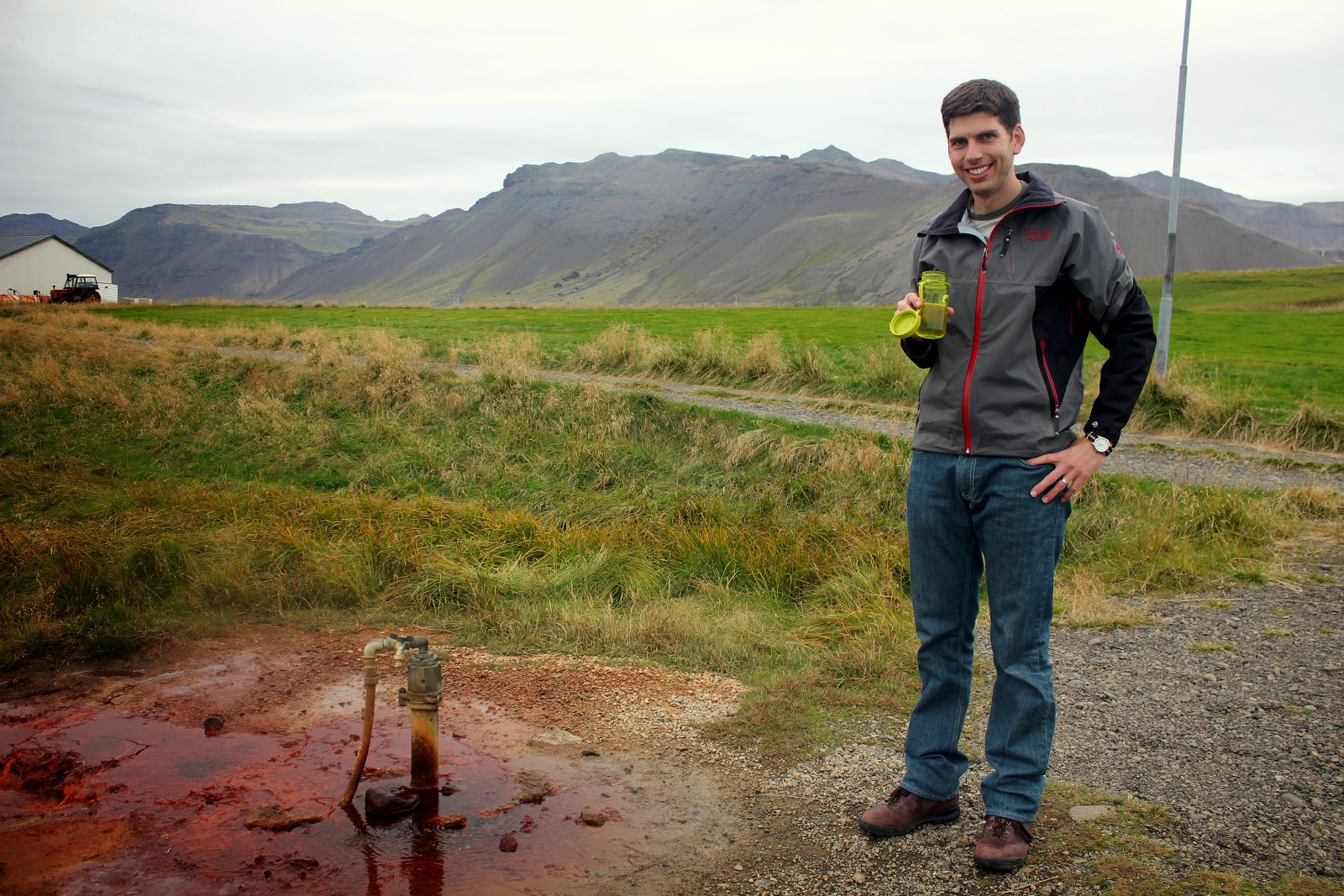 We set out bright and early the next morning to check out the rest of the peninsula, including the glacier that dominates the western end.  Ok, it wasn't exactly bright -- everything was covered in a deep layer of fog, so we could only see up a few hundred feet.  We spent most of the day hoping the clouds would part so we could get a view of something spectacular. 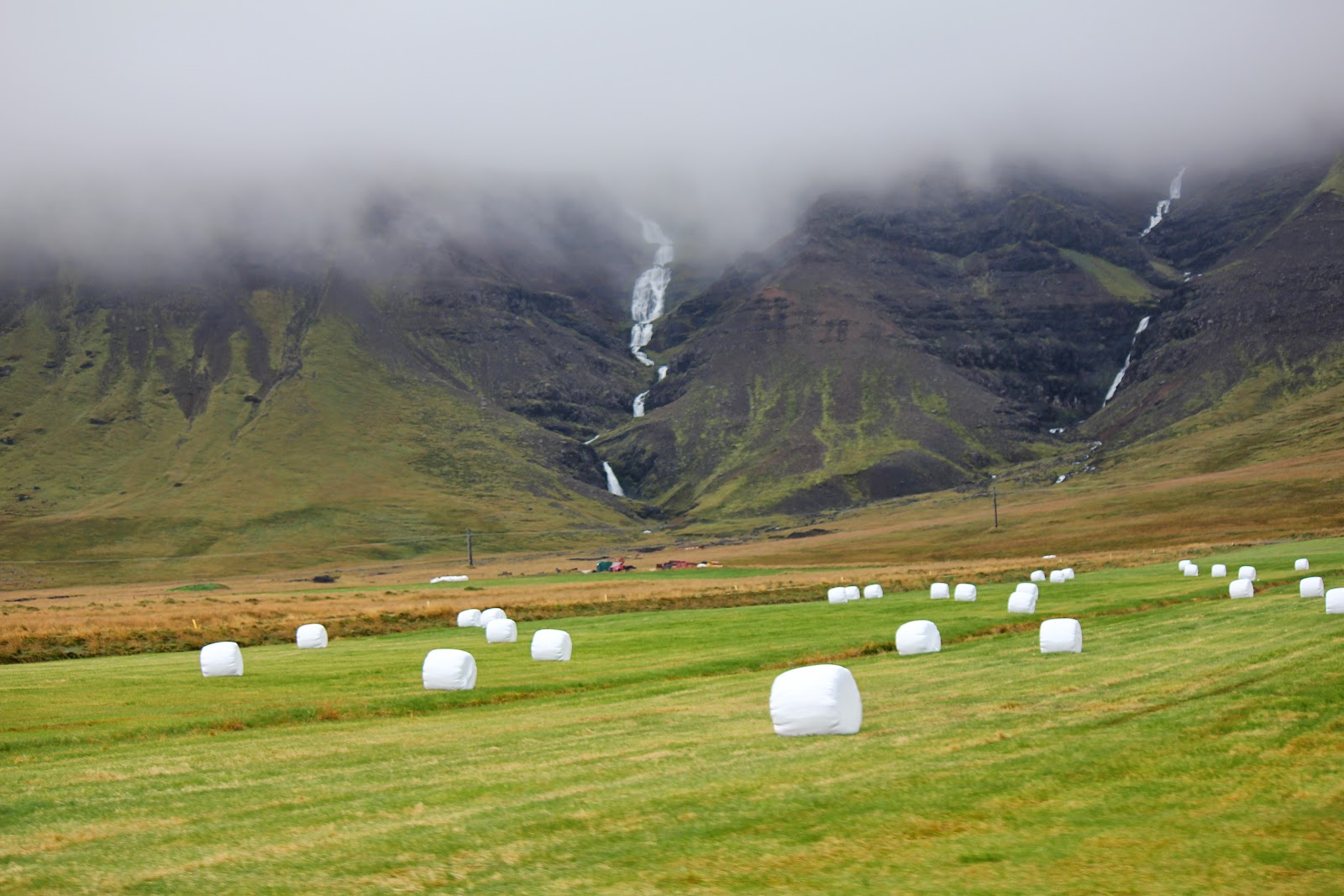 We stopped a few times along the coast to check out the scenery. 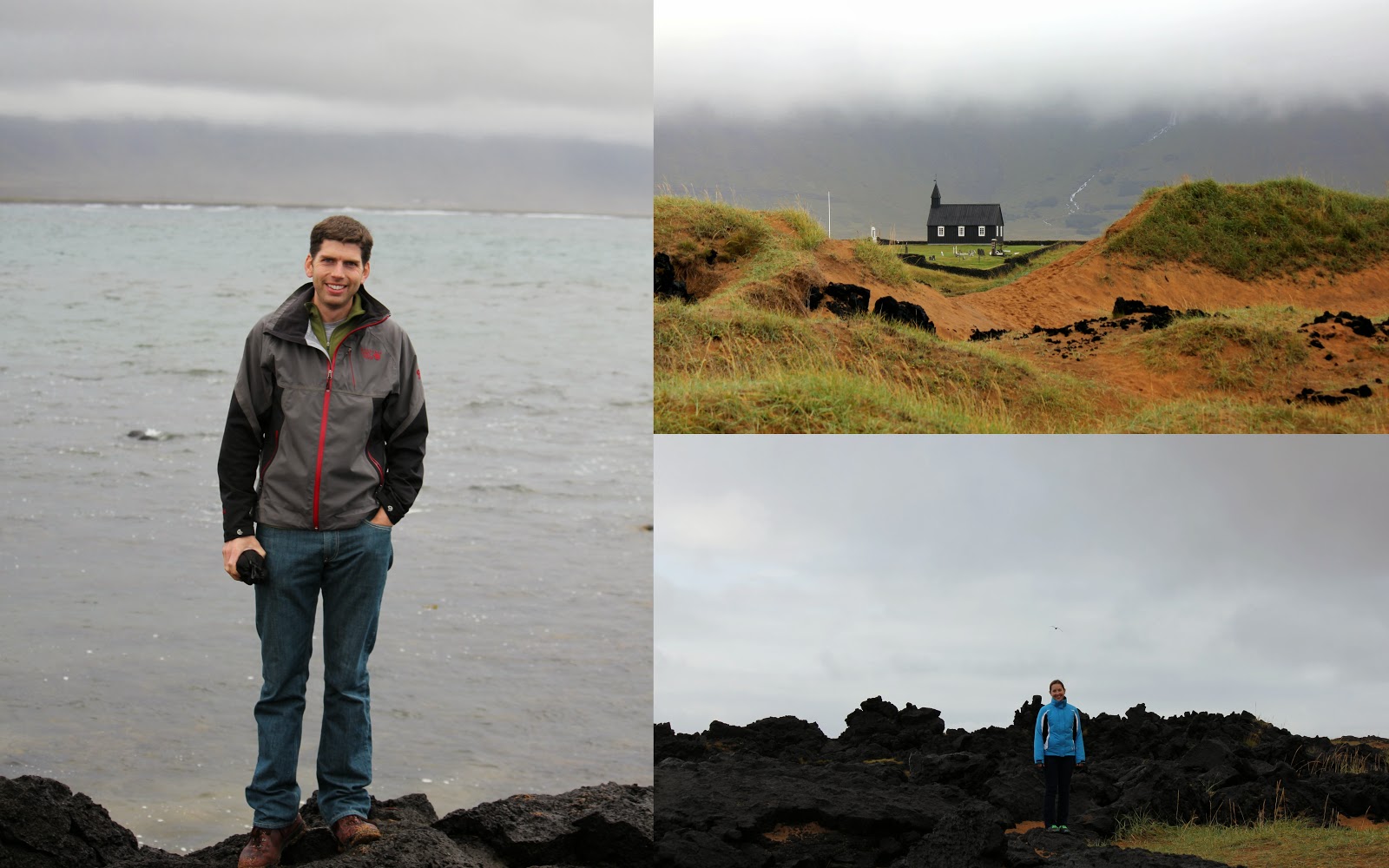 Matt decided he wanted to climb an old lava flow, so he went up, up, up and Kristin stayed a bit lower and picked wild blueberries instead.  The parts with the moss were pretty stable, but the broken lava made for a pretty treacherous climb.  But great views for Matt from the top. 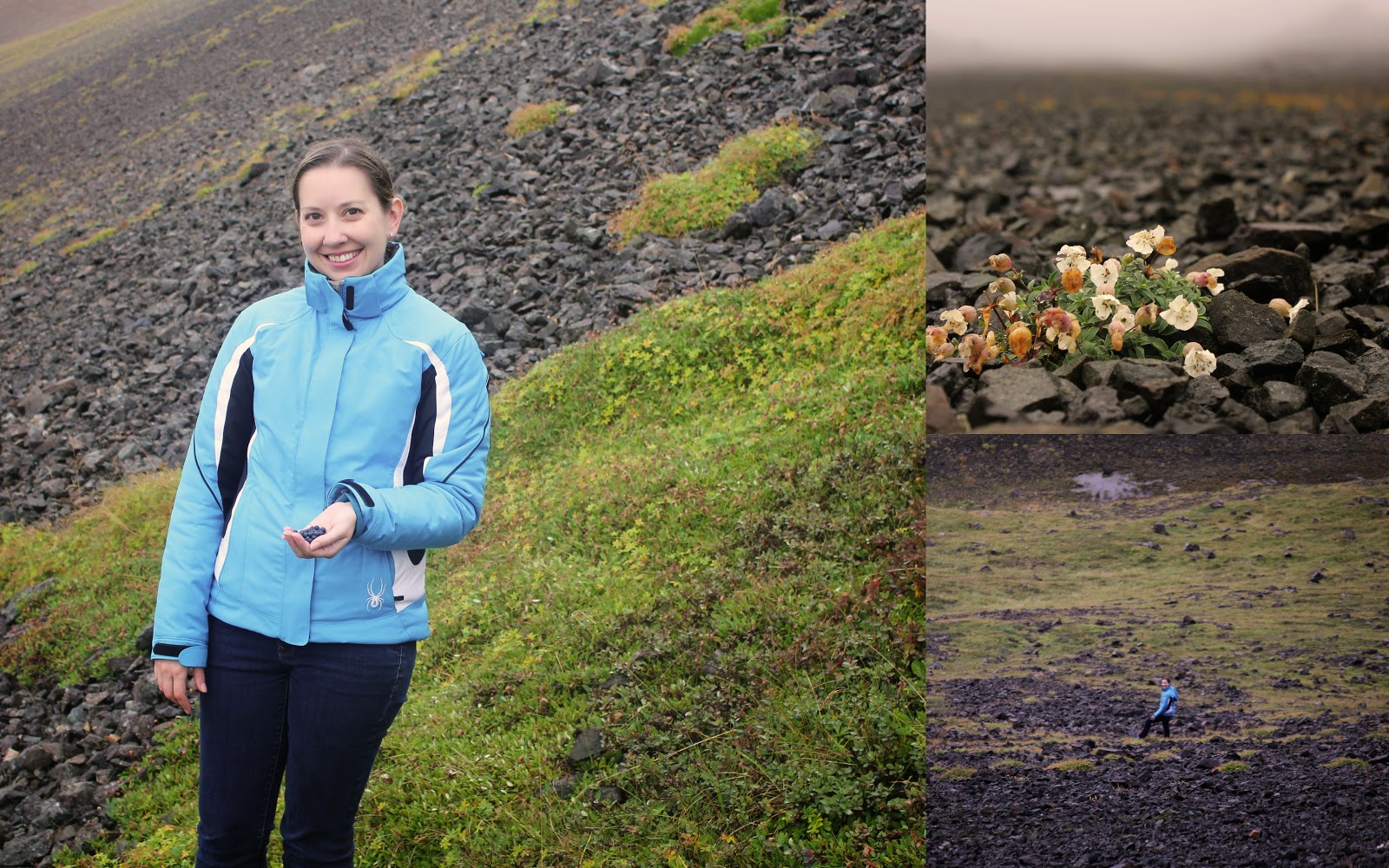 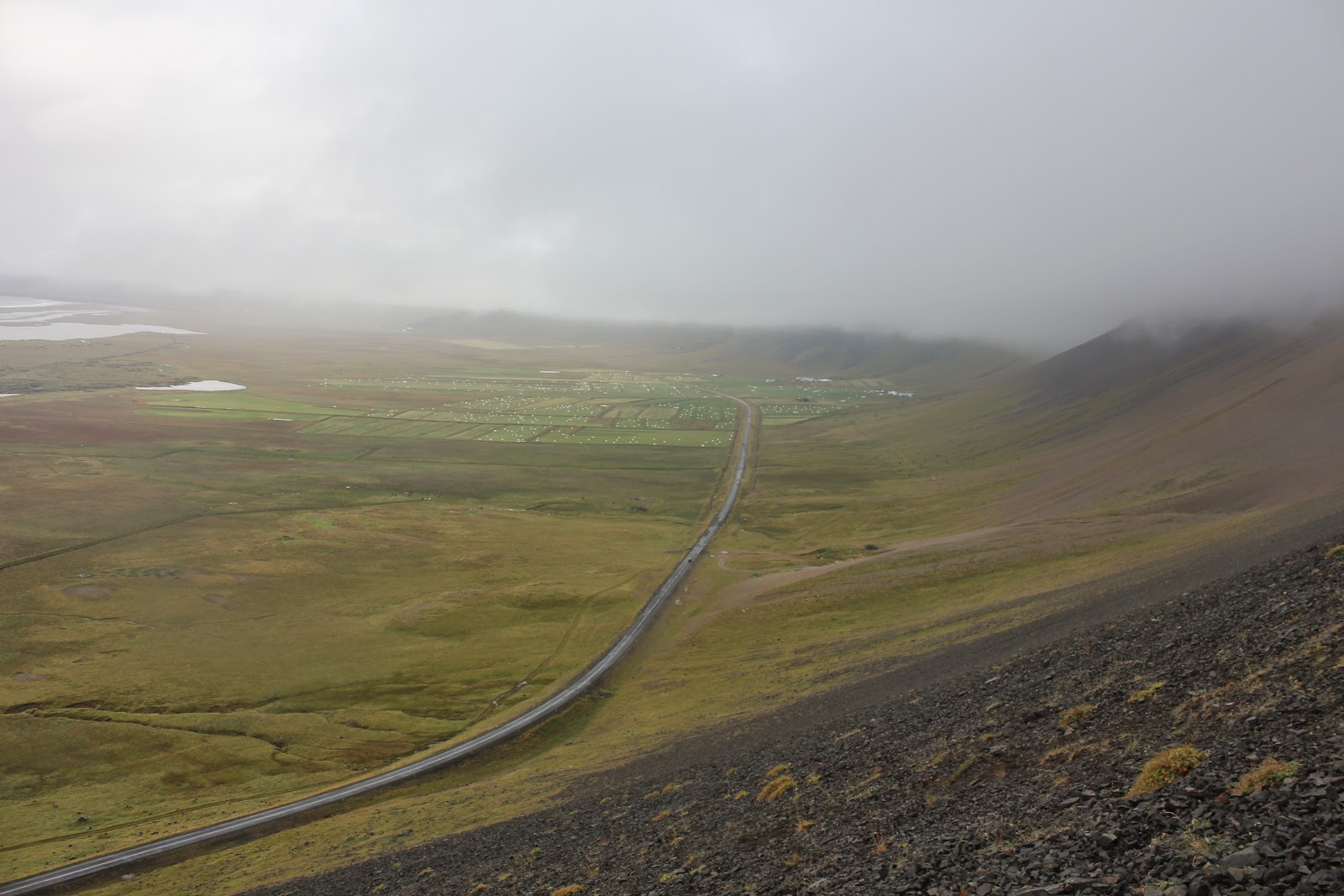 We stopped at a few random overlooks along the coast to look at some weird rocks. 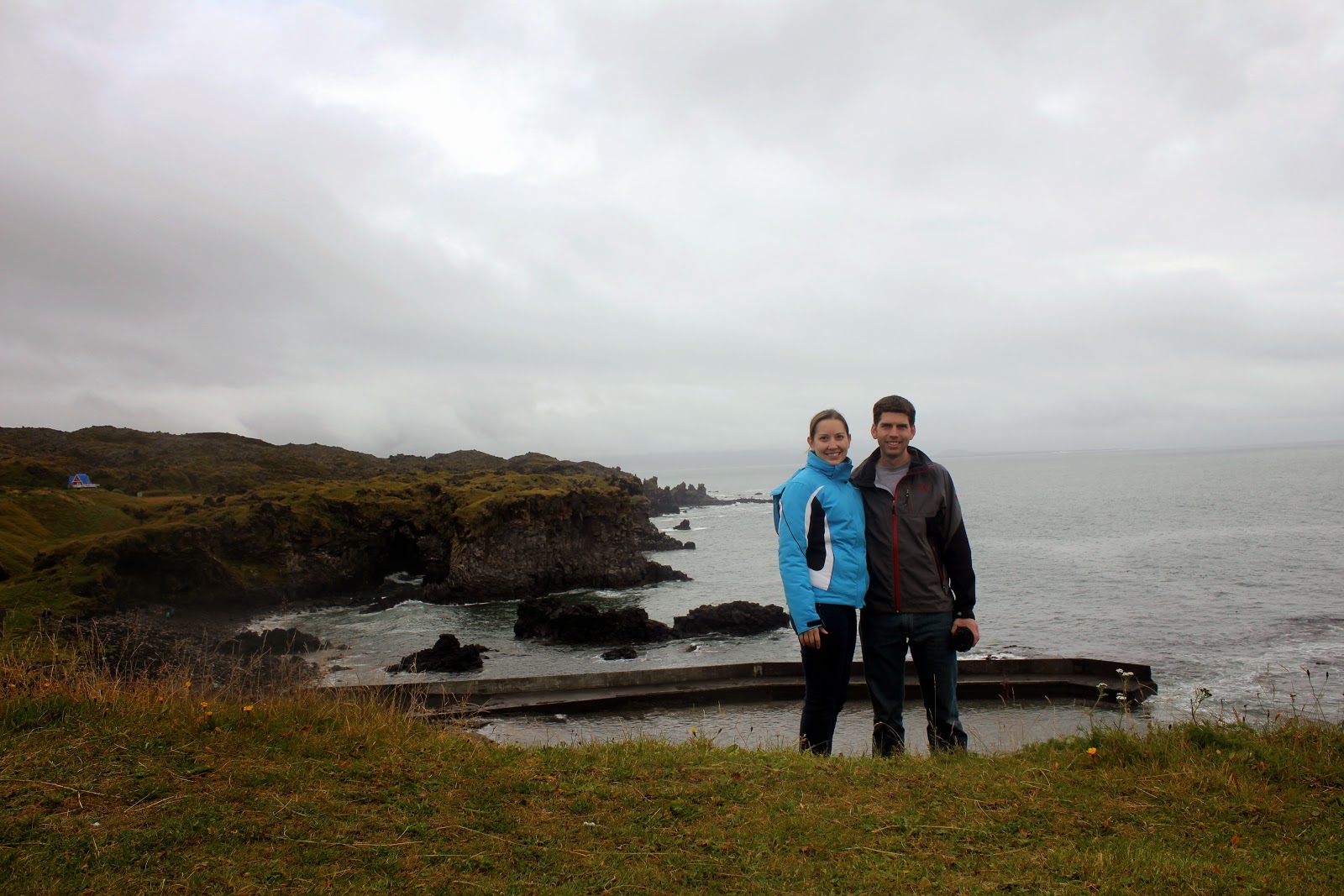 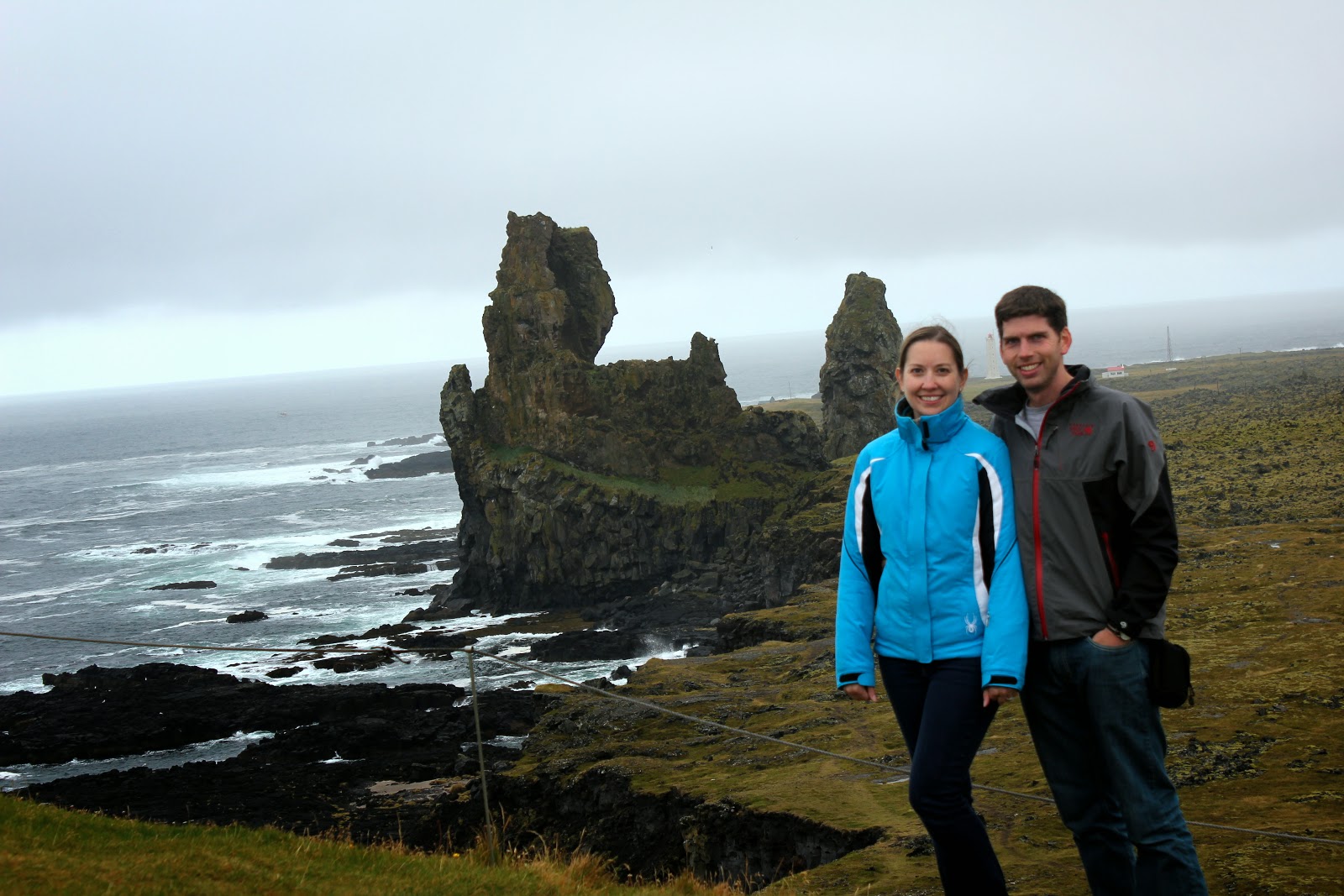 We decided to get adventurous and head inland towards the glacier.  These guys were skeptical of our choice. 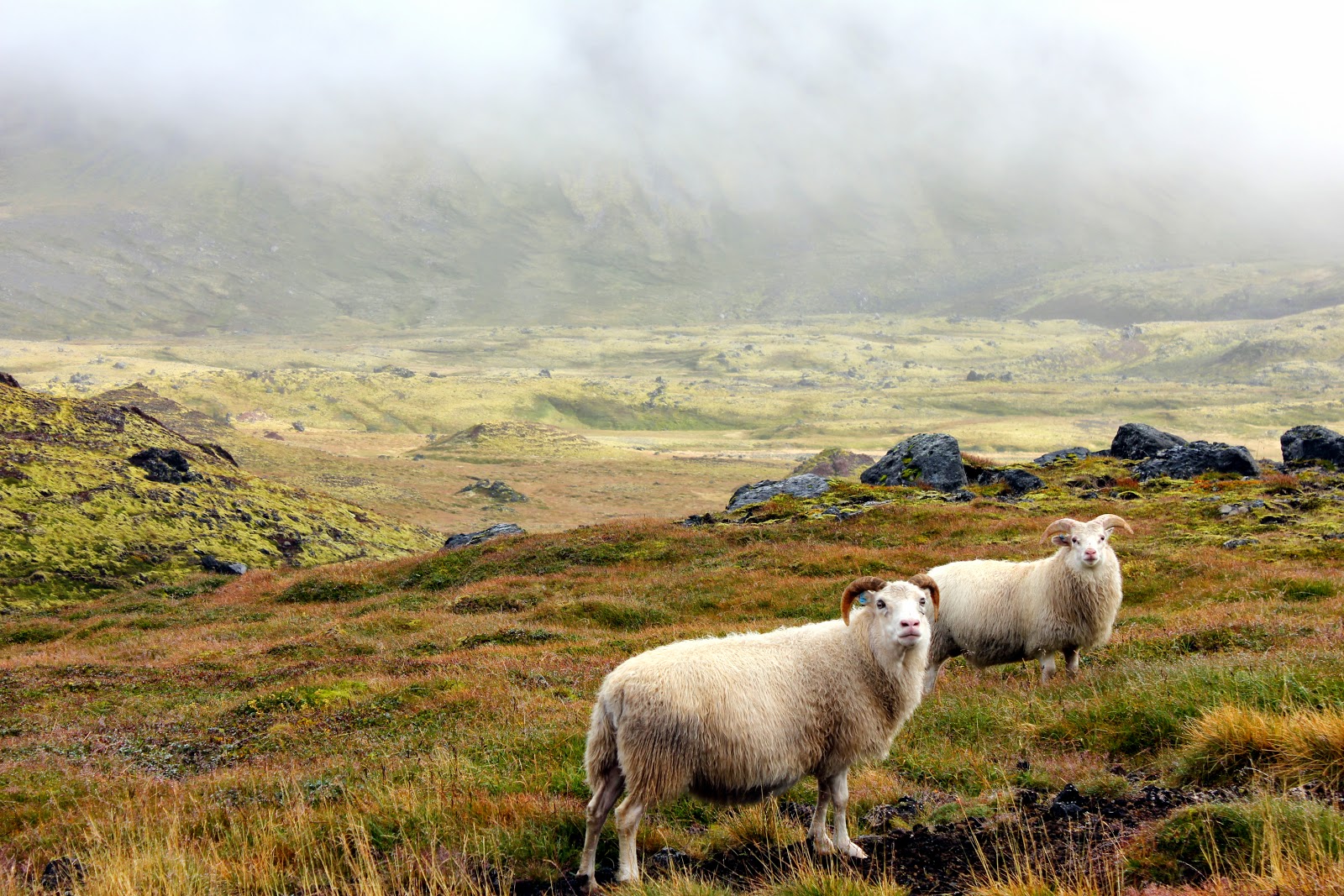 And the weather took a turn for the worse, which didn't add any level of confidence to our decision to abandon the main road.  It was getting a bit cloudy, rainy and cold .... 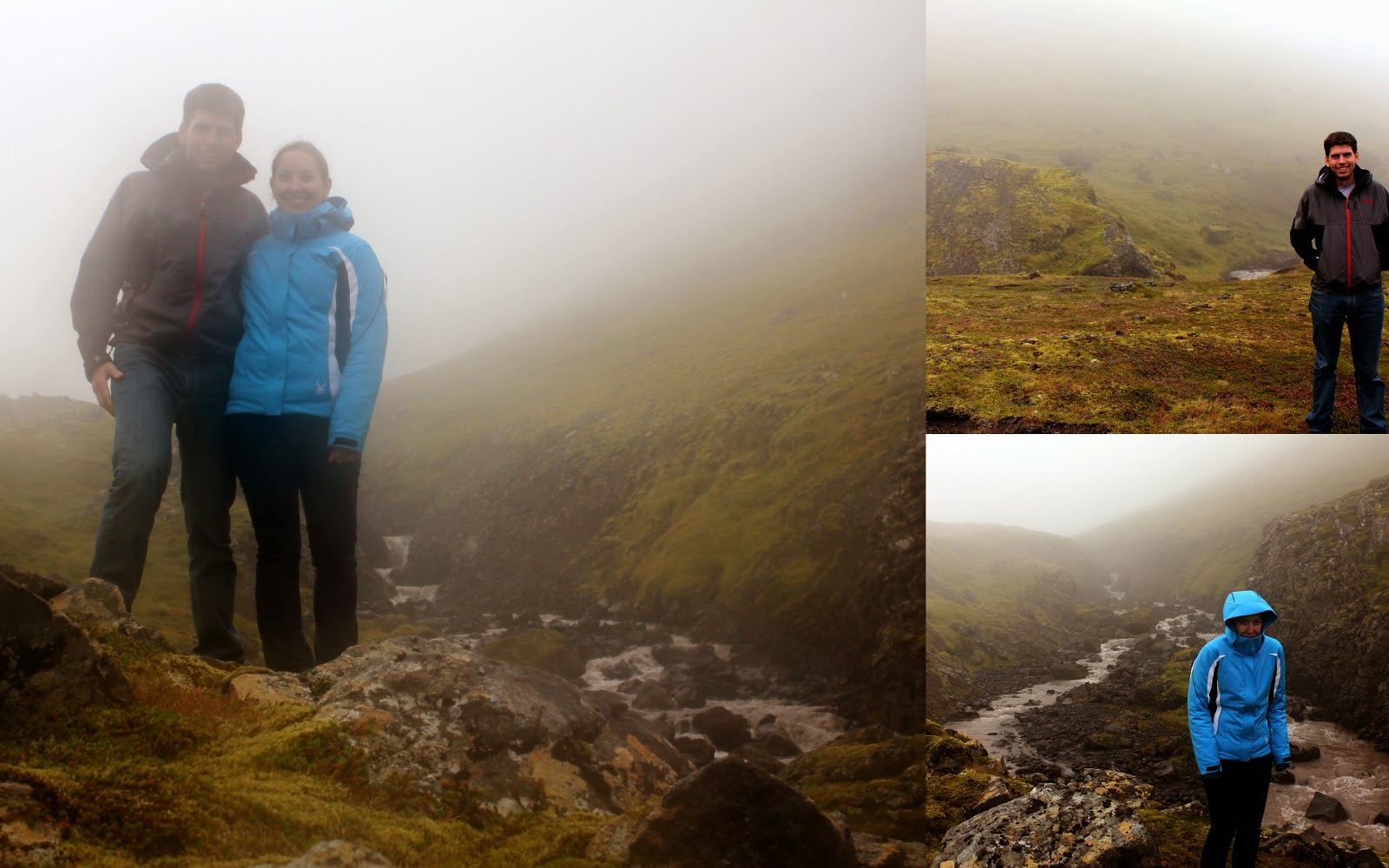 But we managed to navigate the gravel road and find the glacier. 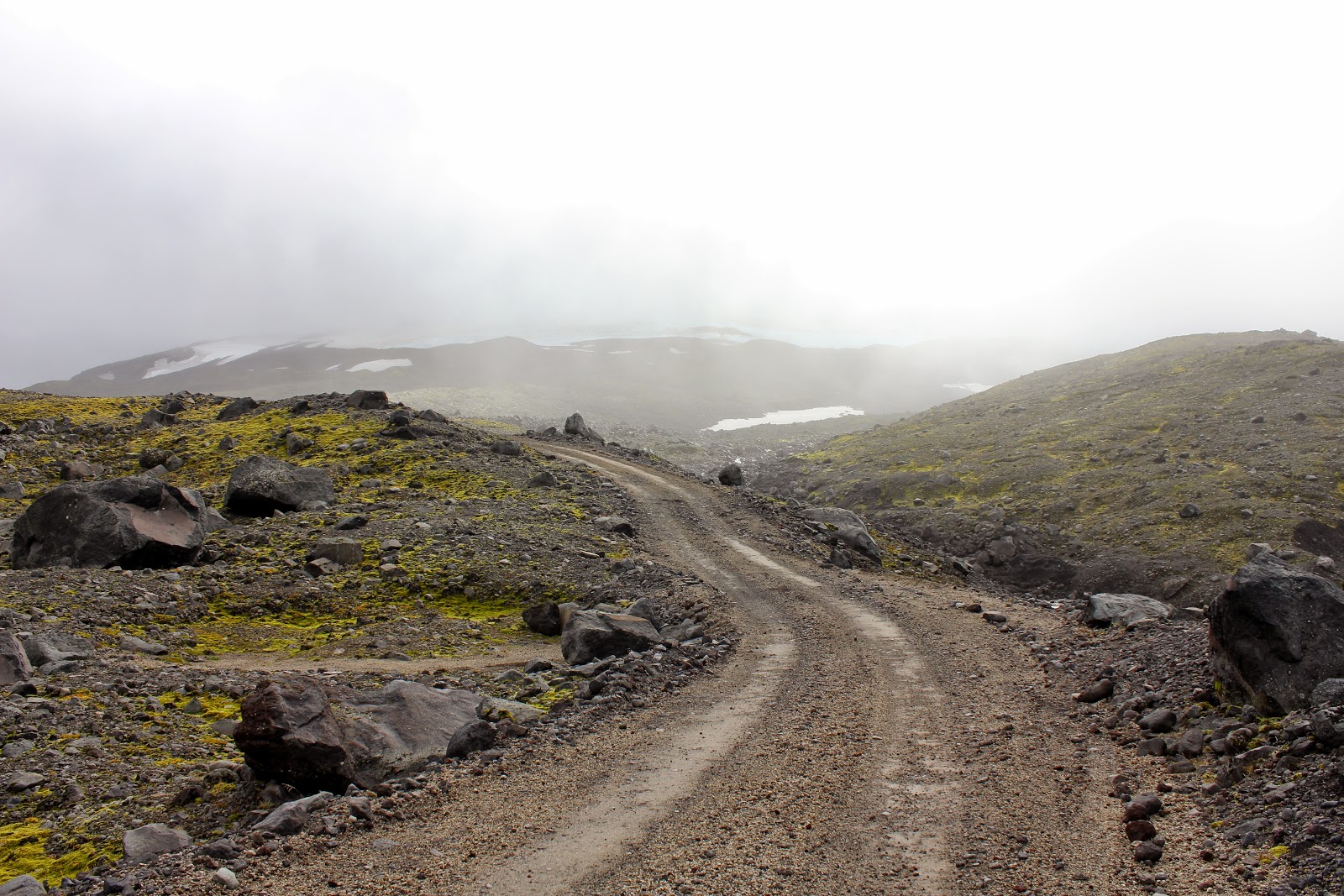 We were thrilled to be able to see the glacier despite all of the fog.  It looked amazing and blue, especially compared to the electric green moss that has grown over the lava. 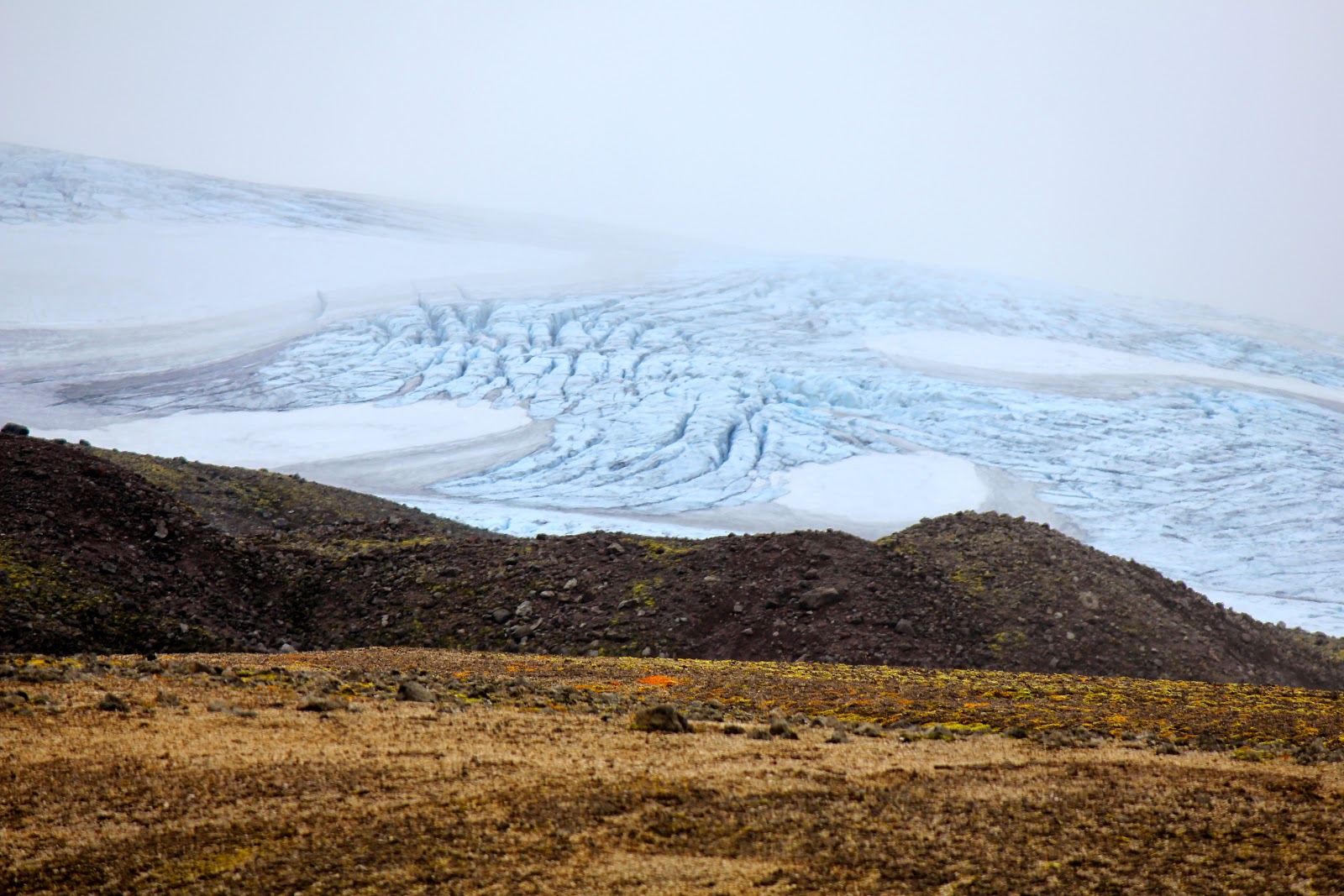 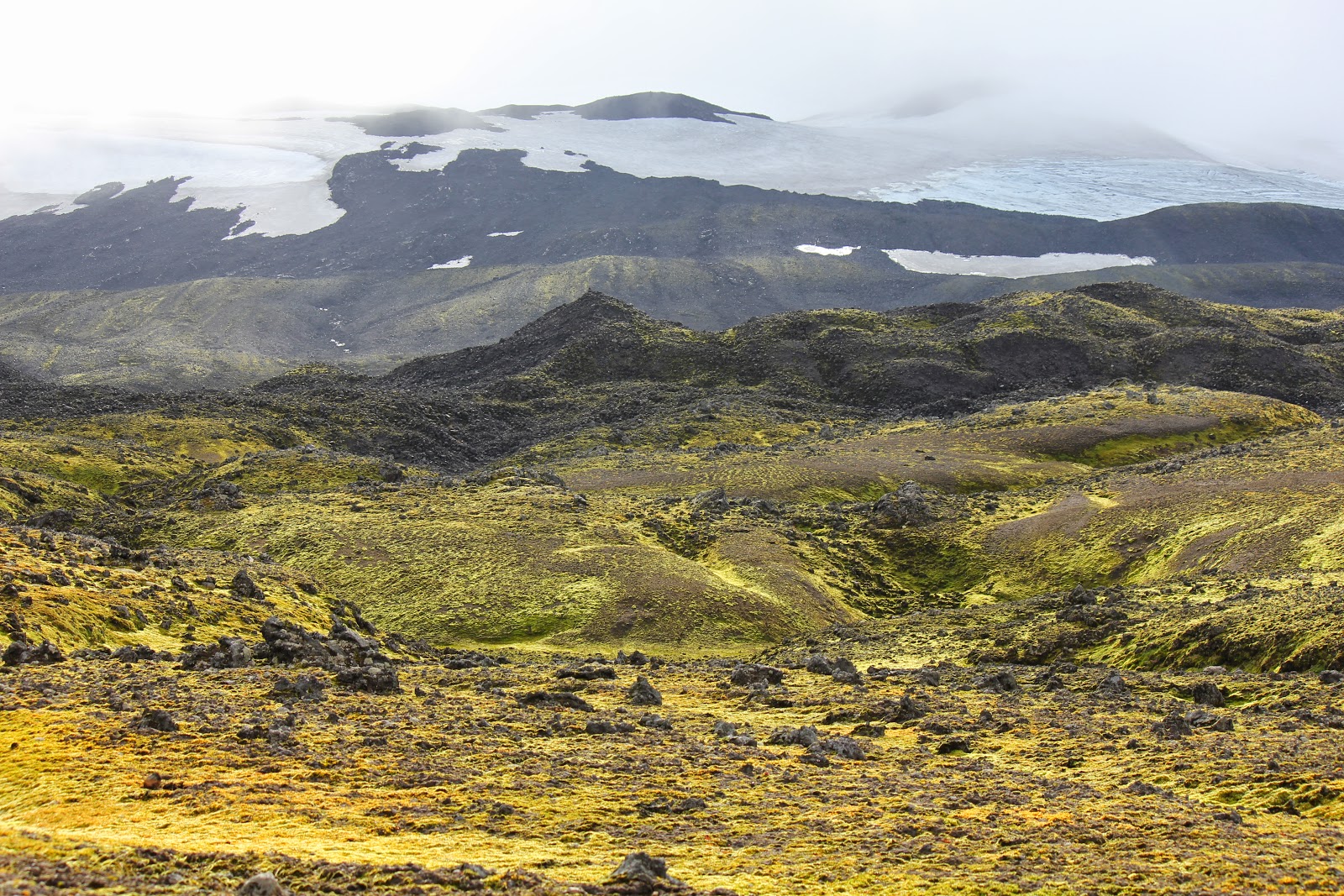 The moss was such a cool color, and only grows in cool, volcanic climates.  It is very spongy to walk on and covers everything with a thick mat.  It was nearly all of the vegetation we saw in Iceland.  And we even got to see a bit of sun while we were near the glacier. 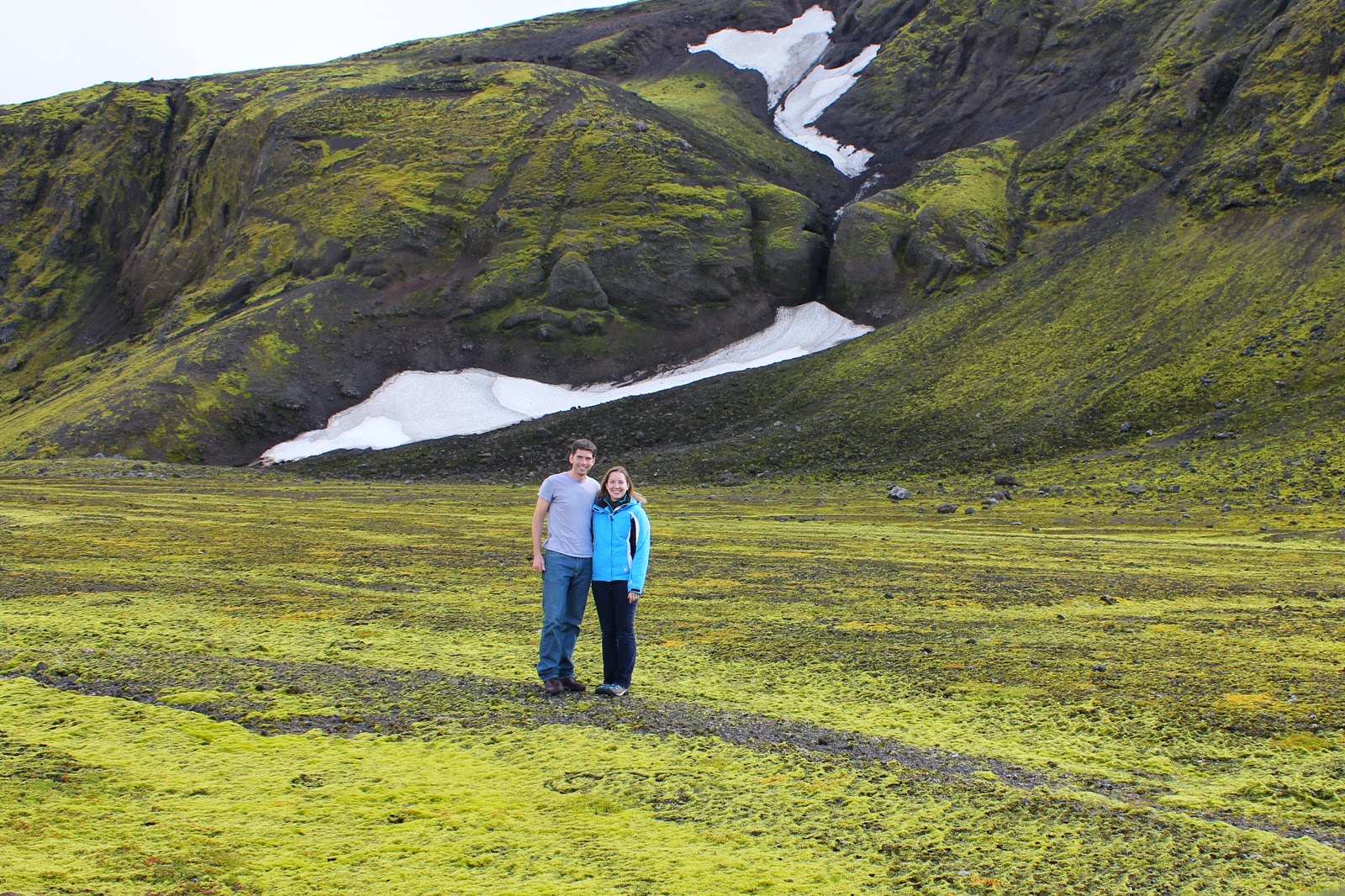 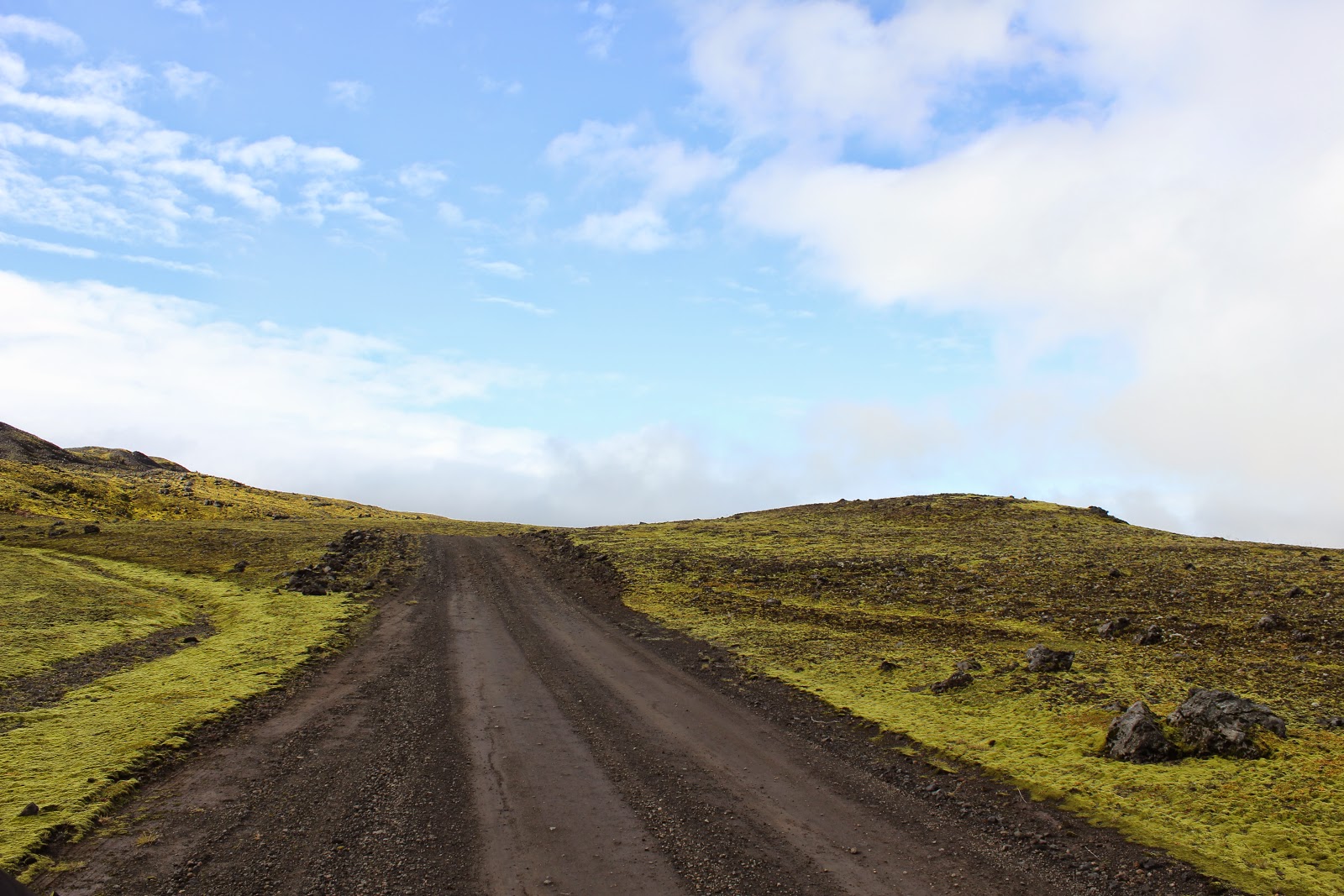 We grabbed some quick soup for lunch at the only nearby fishing village and waived goodbye to the glacier. 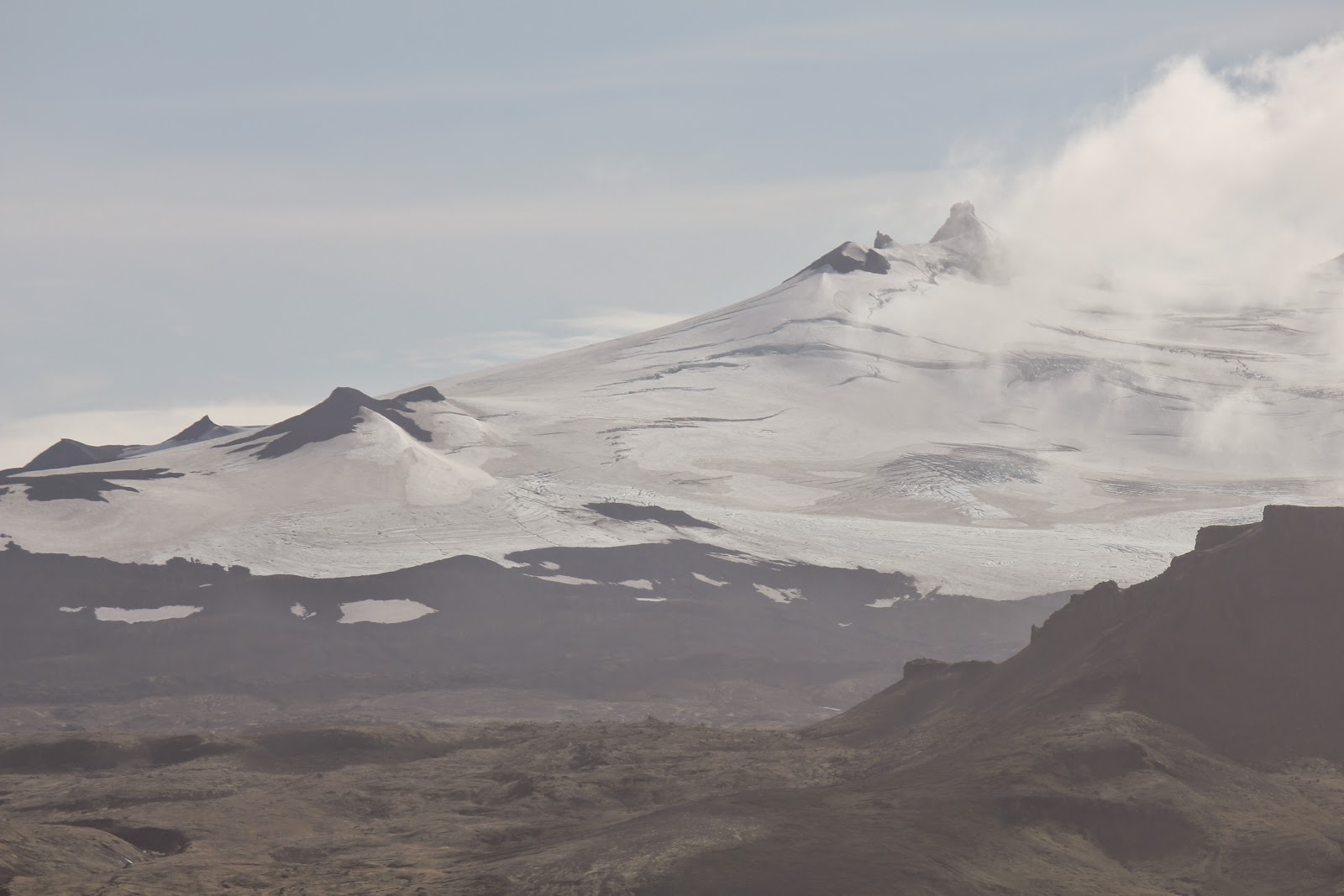 We stopped at the largest town on the peninsula for some snacks (more pastry) and to catch a cool view of the harbor.


A quick stop at some basalt columns, and it was time to head back to Reykjavik to pick pick up Abby and Jack at the airport. 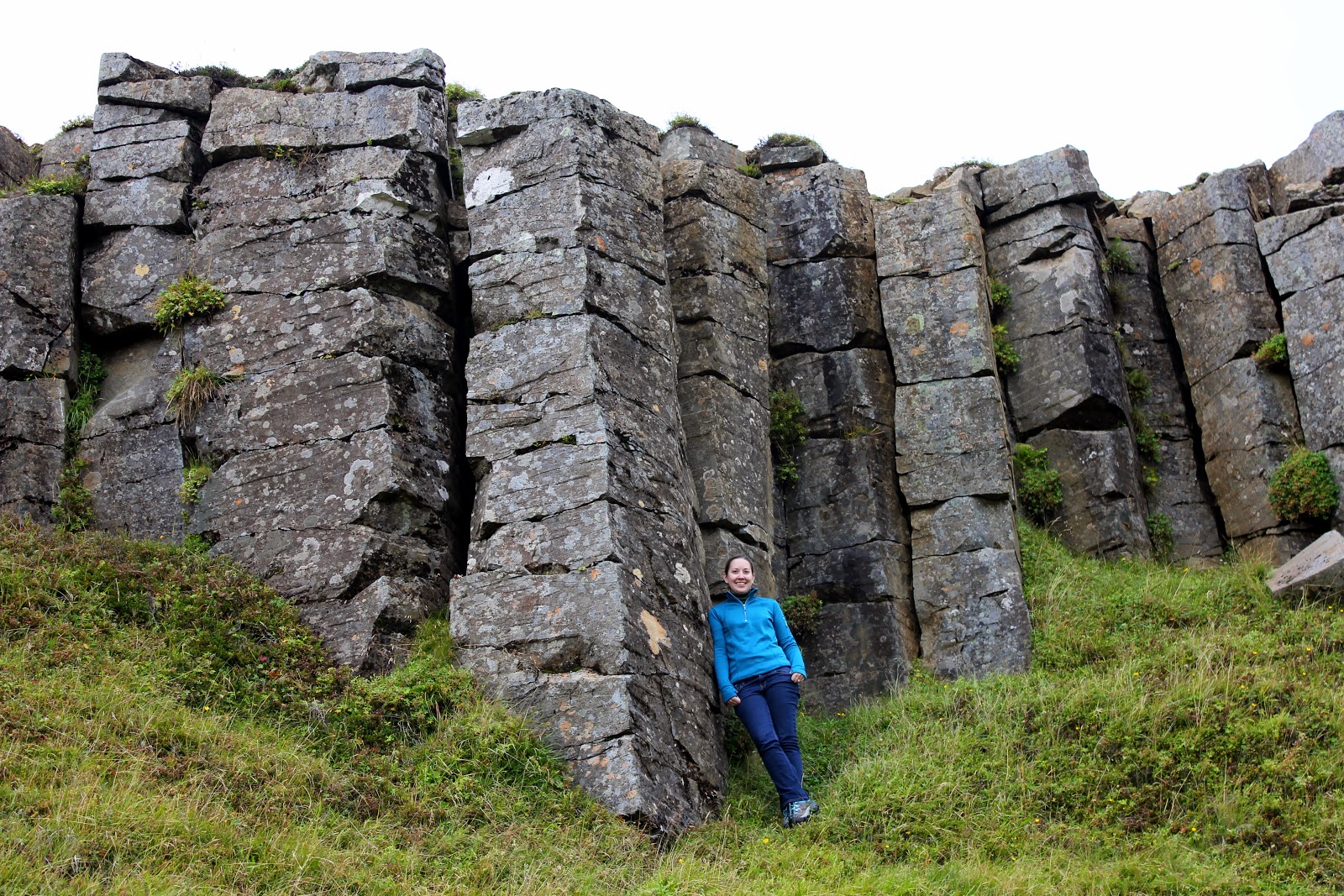 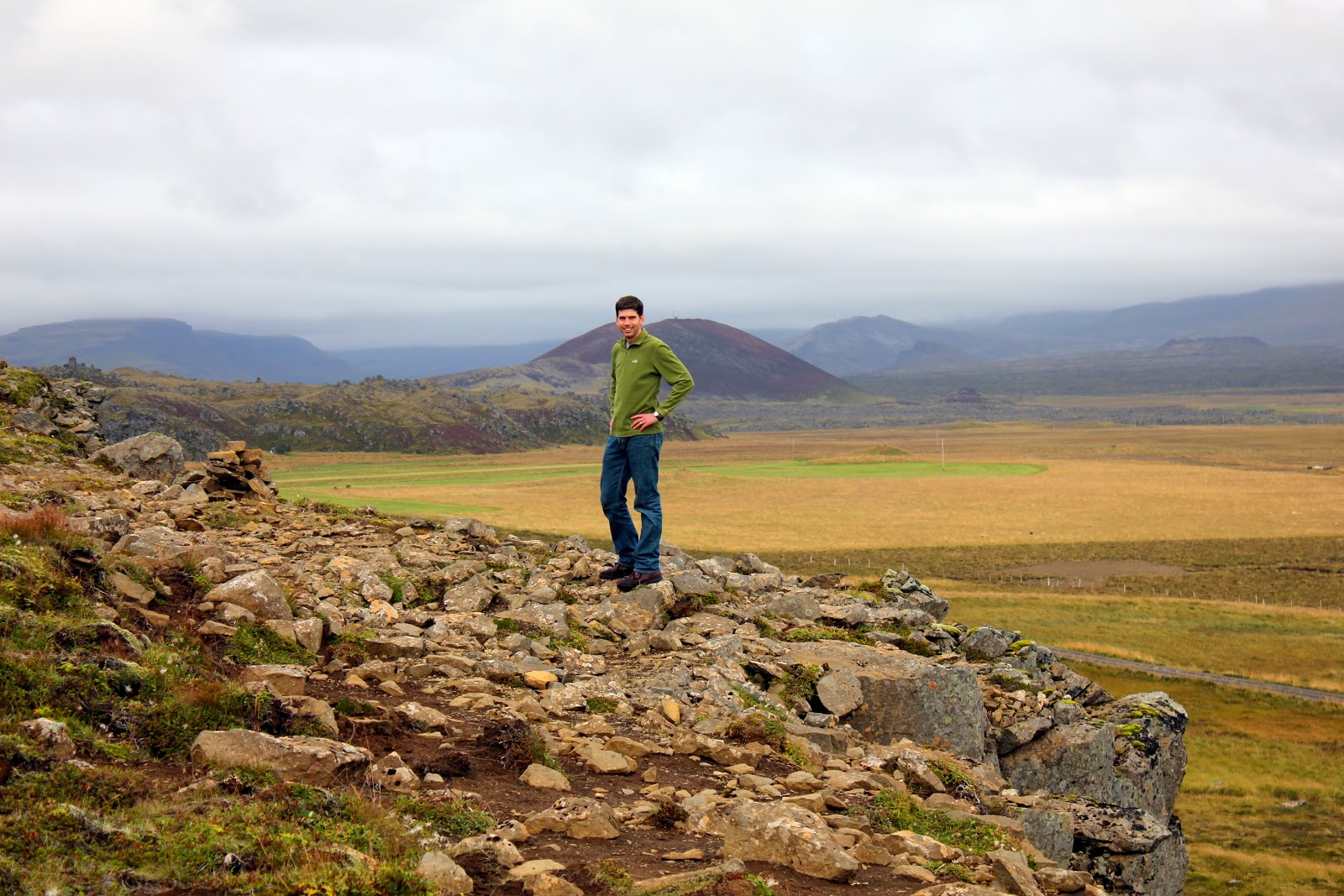 We were excited to continue our Icelandic explorations with them!

Posted by Kristin Hendren at 2:42 PM