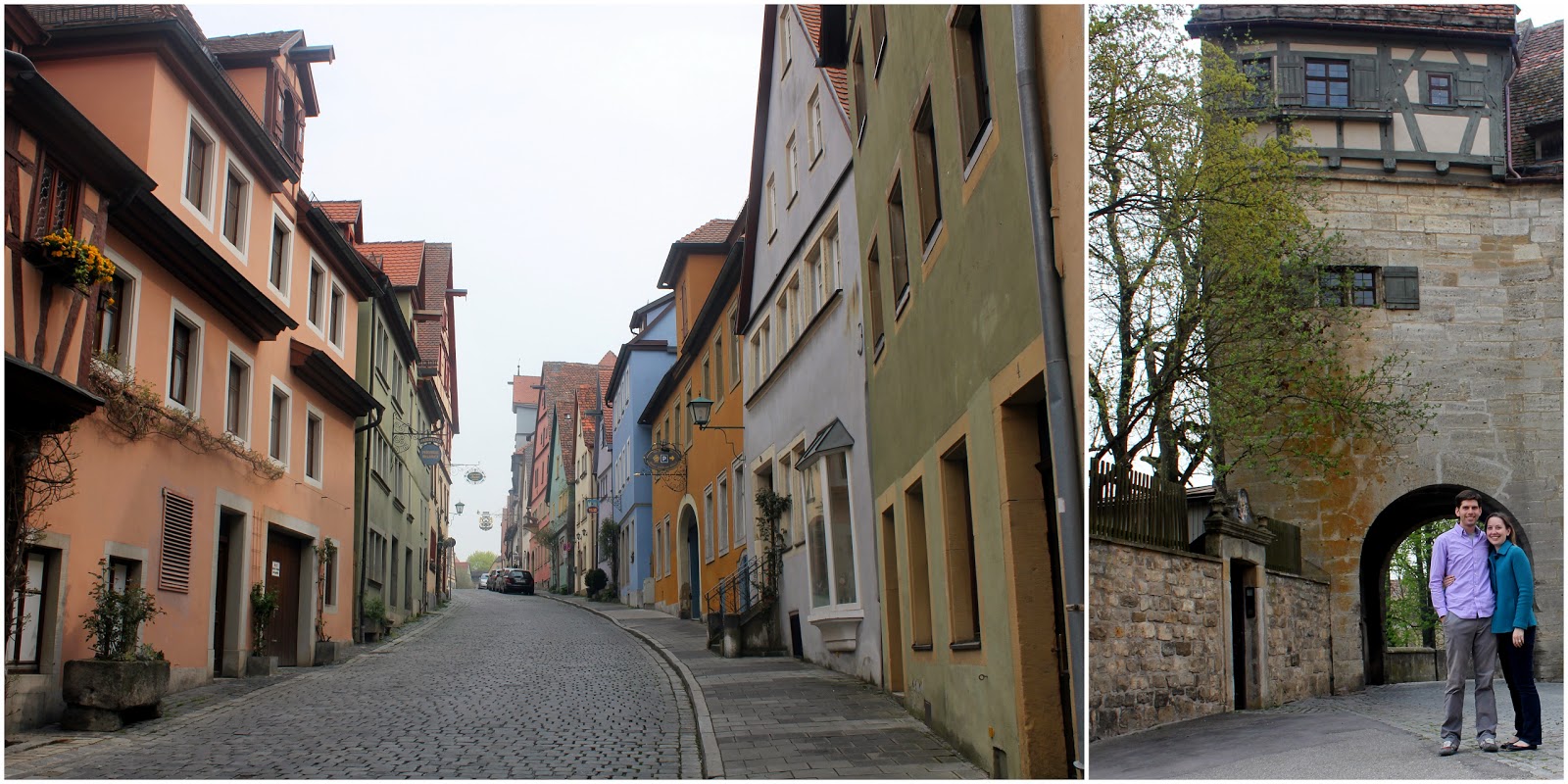 We spent one very full and fun day in Rothenburg ob de Tauber.  It is a 1 1/2 hour drive from Stuttgart, which made it an easy day trip for us.

Rothenburg was in its prime from about 1140 to 1400.  During the 30 years war in the 17th century, the town was conquered and pillaged a few times, leaving fantastic architecture, but very little wealth.  Without any money, Rothenburg didn't develop any further, which kept its 17th century building facades into the 21st century (with a little help from historic preservation laws that were put into place in the 1880s, when tourism of Rothenburg first started).

Rothenburg is definitely super touristy.  Even in April (which is just the start of Germany's tourism season) the place was very busy at midday.  You'll see bus loads of Japanese and German tourists crowding the town square.  Luckily we arrived early and stayed late, so we had the town to ourselves for much of the day.  This place caters to tourists, so there are lots of fun things to see, places to pull out your credit card (including a super expensive Christmas ornament empire) and tasty things to eat.
We started our exploration at the Medieval Crime and Punishment Museum (Mittelalterliches Kriminalmuseum).  Here you can find lots of different ways to punish people.  Have a quarrelsome woman on your hands?  Put her in a neck violin (bottom left).  Two women quarreling with each other?  A double neck violin (top left) will surely help them work out their differences, since they'll be attached to each other.  A bit too much to drink?  You'll end up in the drunk tank.  Which is literally a tank that you wear (top left).  Definitely comprehensive, and a bit disturbing all at the same time.


We then started a walking tour of the town at the Market Square to check out the lovely architecture of the Town Hall, Councilors' Tavern (currently under construction and hidden by scaffolding), Baumeister Haus and St. George's fountain, which all border the square. 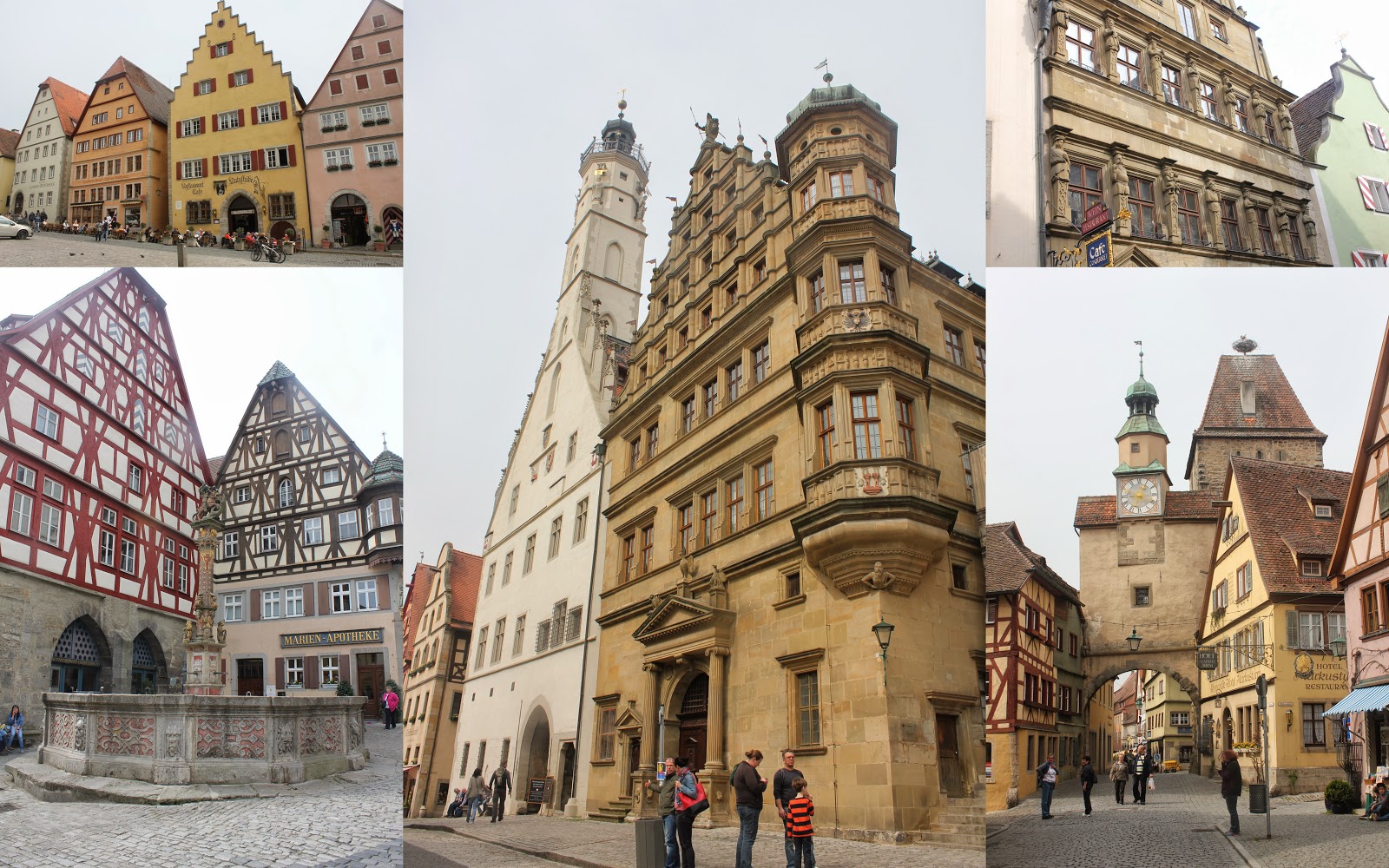 We grabbed a picnic lunch at the local market and bakery and headed to the city walls for lunch surrounded by a fantastic view. 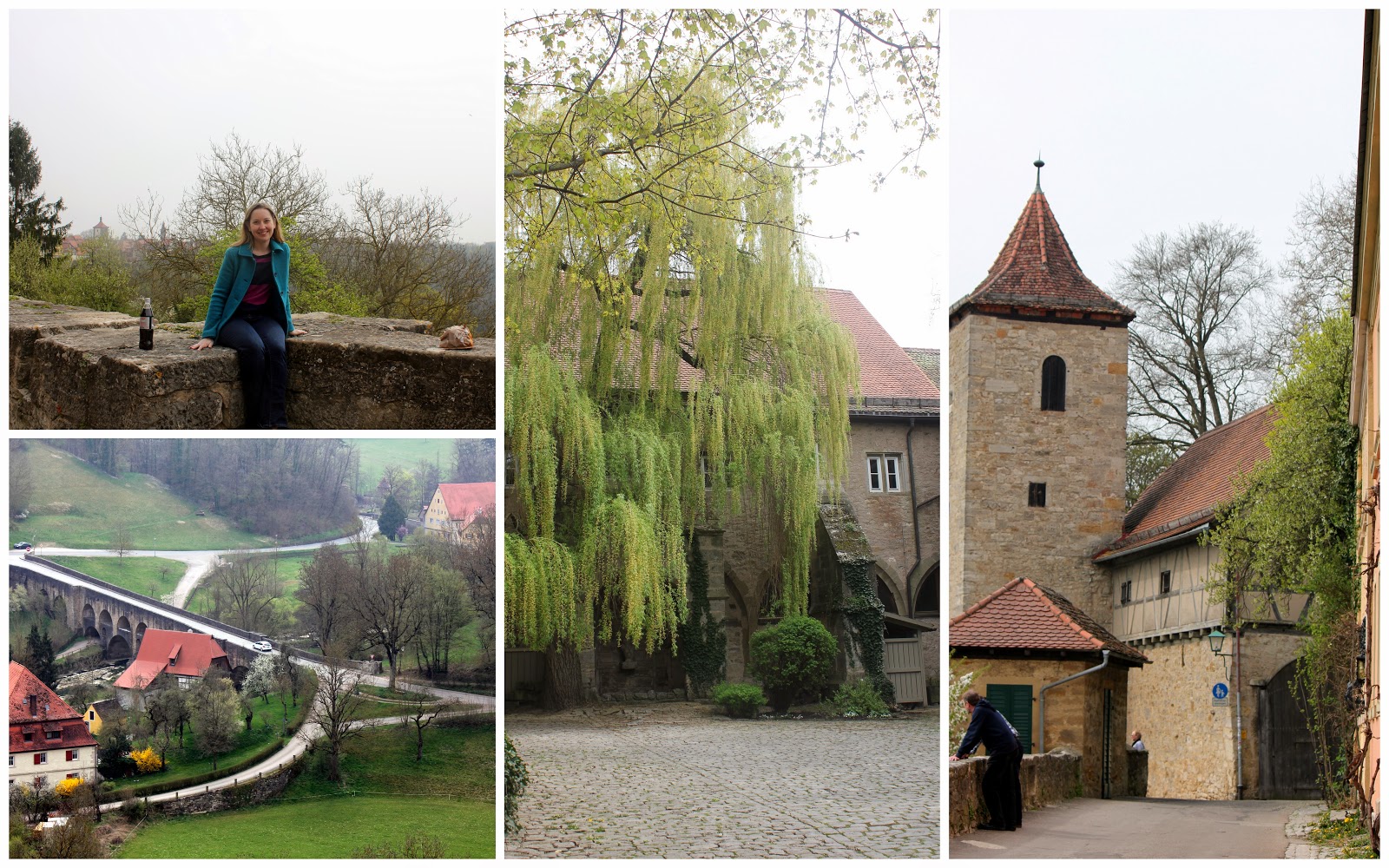 Next we headed back to the Market Square and to the top of the Town Hall, the tallest spire in town.  For 2 euro, you can climb over 200 steep and narrow steps to the top.  We live on the 6th floor with no elevator.  It wasn't a problem for us.  Not the case with the other folks we saw.

The view from the top was great.  You could see for miles across the rooftops of Rothenburg. 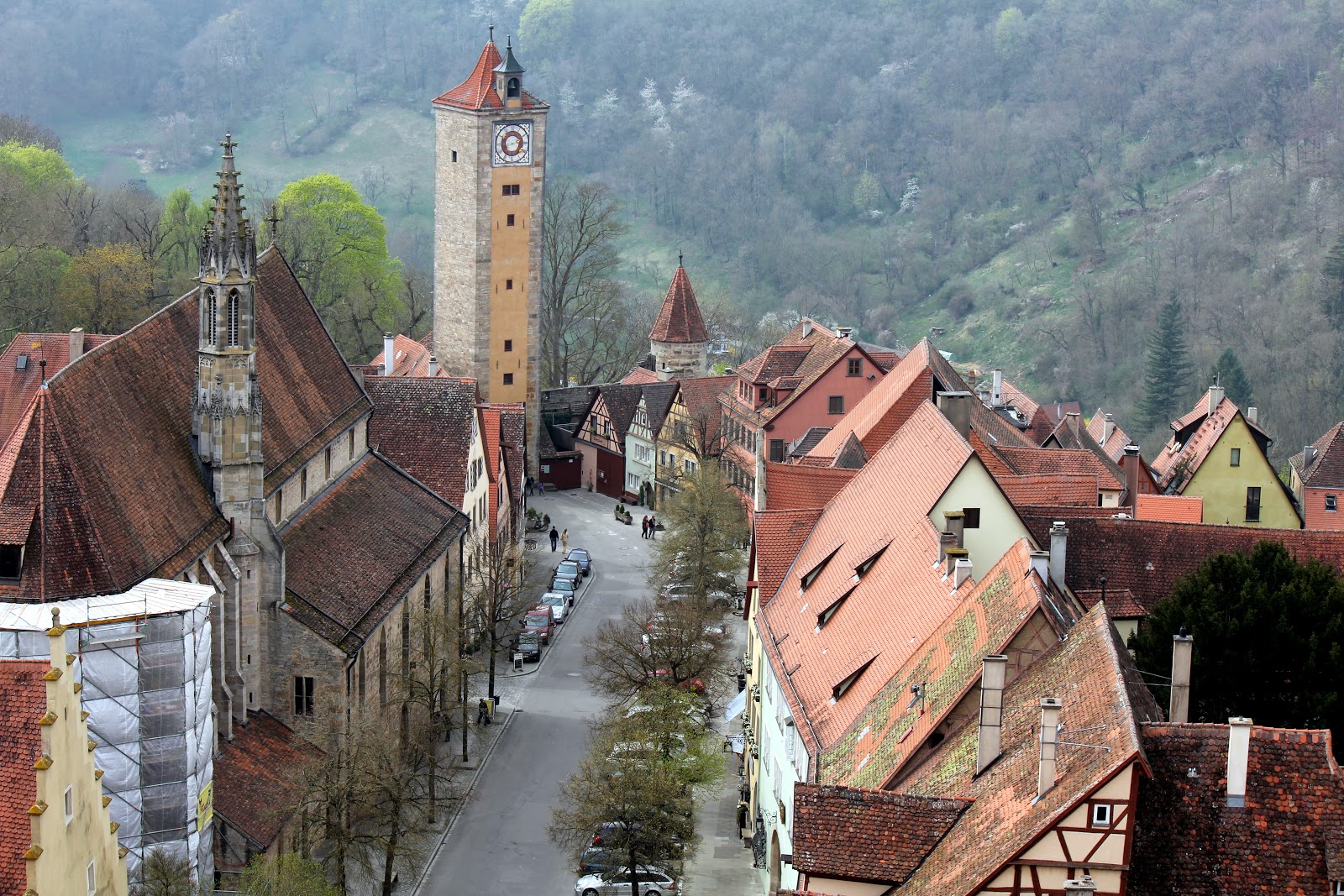 After the hike to the top of Town Hall, it was time for snacks and shopping.  The famous sweet in Rothenburg is the Schneeballen (snowballs), which is basically pieces of pie dough made into a ball and covered with something sugary.  Not our favorites, but we definitely ate them.  Matt was most excited about the ice cream (eis in German) and the encased meats.  Since Kristin doesn't eat any of those things, she considered a suit of armor.

The suit of armor was a bit pricey, so we checked out the Anneliese Friese gift shop between the Market Square and St. Jakob's church.  Super cute family run business.  Frau Anneliese (who is in her late 80s) was holding court in the shop and excited to talk to everyone about her time in the US.  She spoke perfect English (her sister lived in Virginia) and has travelled more extensively in the US than either of us.  We packed up all the well-priced goodies we grabbed from her shop, said our goodbyes, and kept going on our walking tour.
St. Jakob's church is from the 14th century and includes some pretty amazing original stained glass and a wood carved alter.

We checked out some of the beautifully colored local buildings, as well as the convent garden. 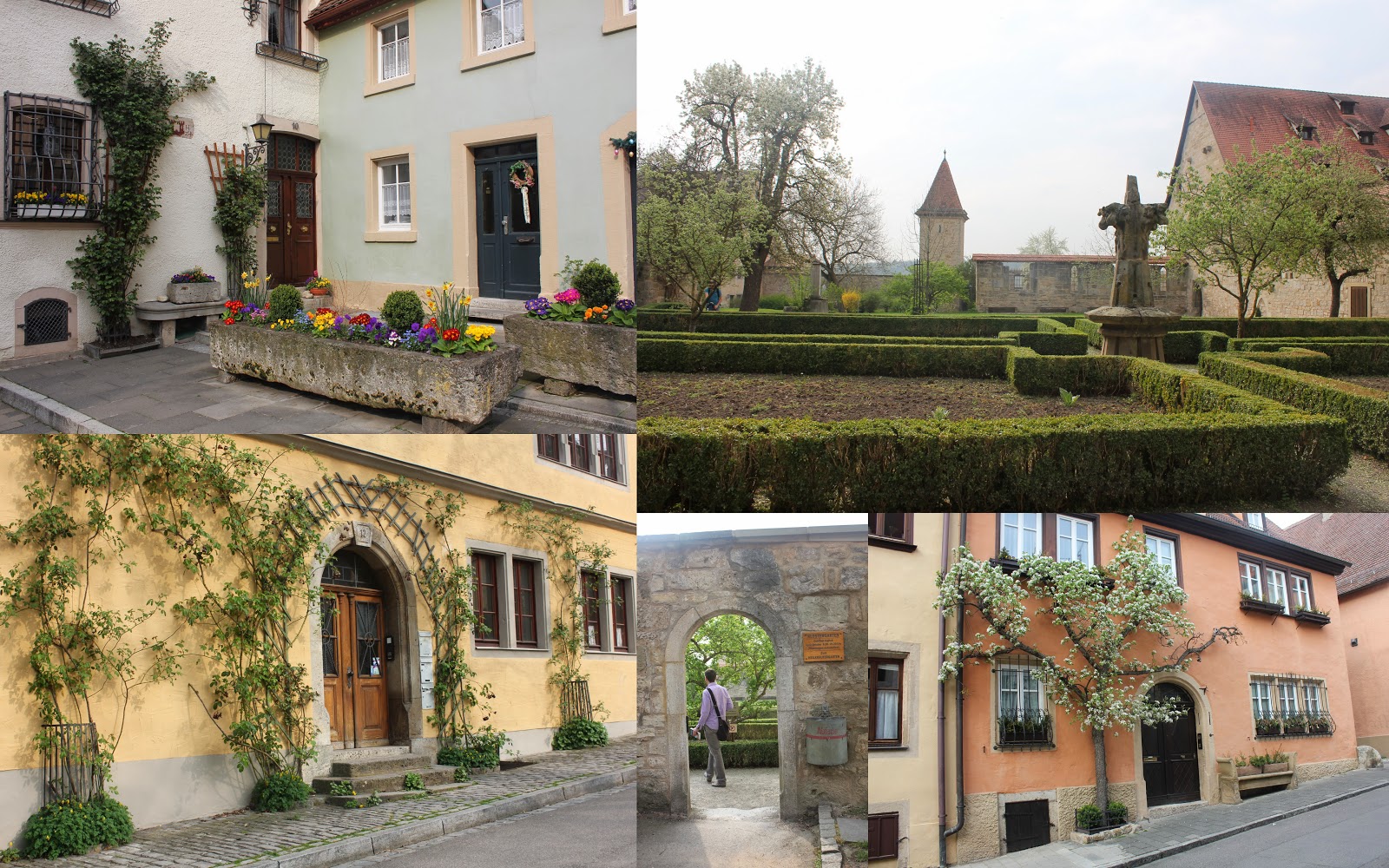 Rothenburg is almost entirely circled by a fantastic covered town wall that you can walk along.  We started at the Spitaltor on the south end, the most heavily fortified part.

The wall suffered damage during WWII, but luckily the city center was spared by the Assistant U.S. Secretary of War.  His mother had visited the town and had a painting of it in his childhood home. He heard of the beauty of the town and offered to save it from shelling and bombings if the Germans didn't defend it.  Despite orders from their superiors to resist, the Germans retreated and the city was saved from major damage.  Any damage was quickly repaired, and now you can walk along the entire length of the wall, checking out the ramparts along the way. 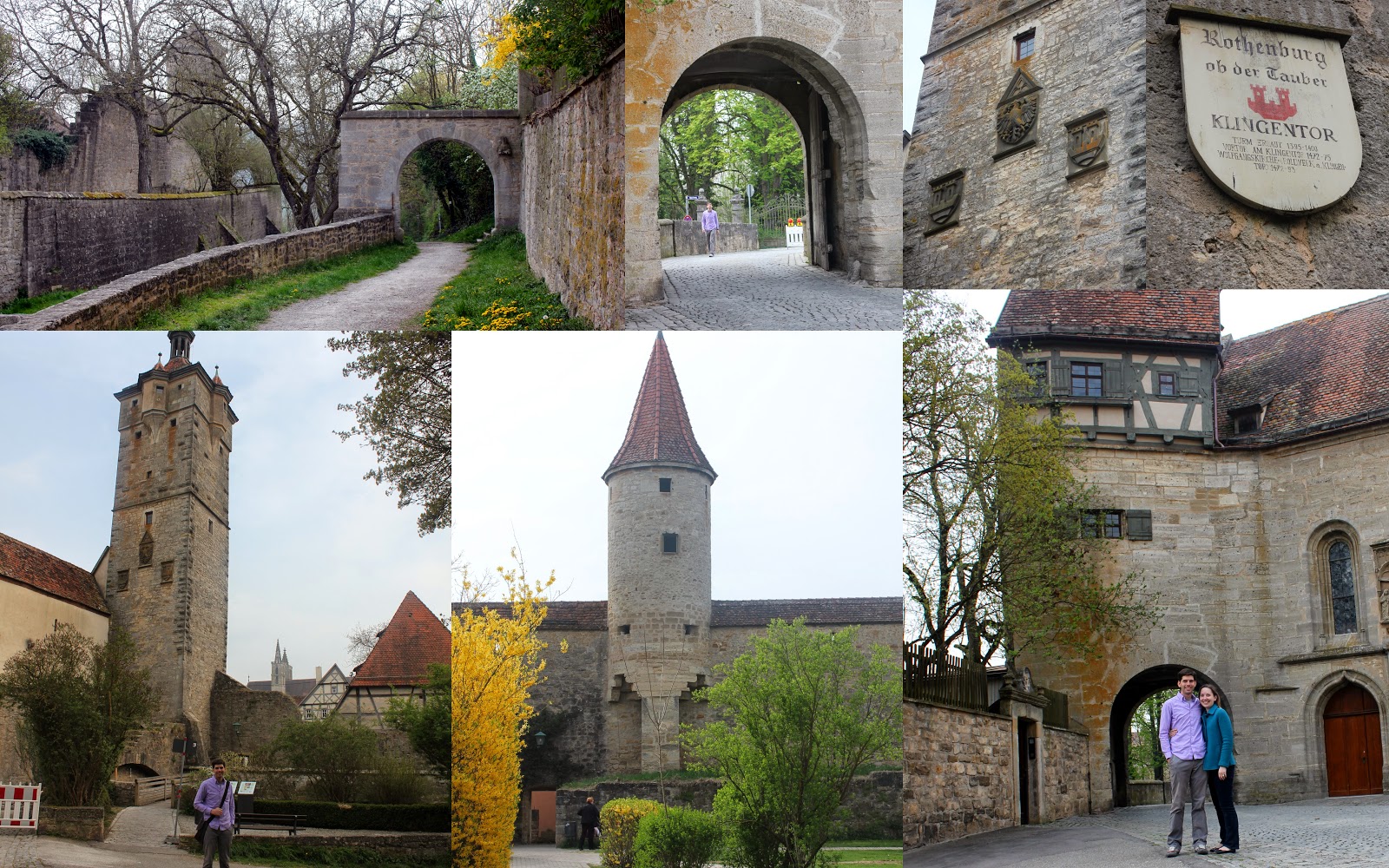 There were very few people who adventured on to the wall, so it was much quieter than the center of town. 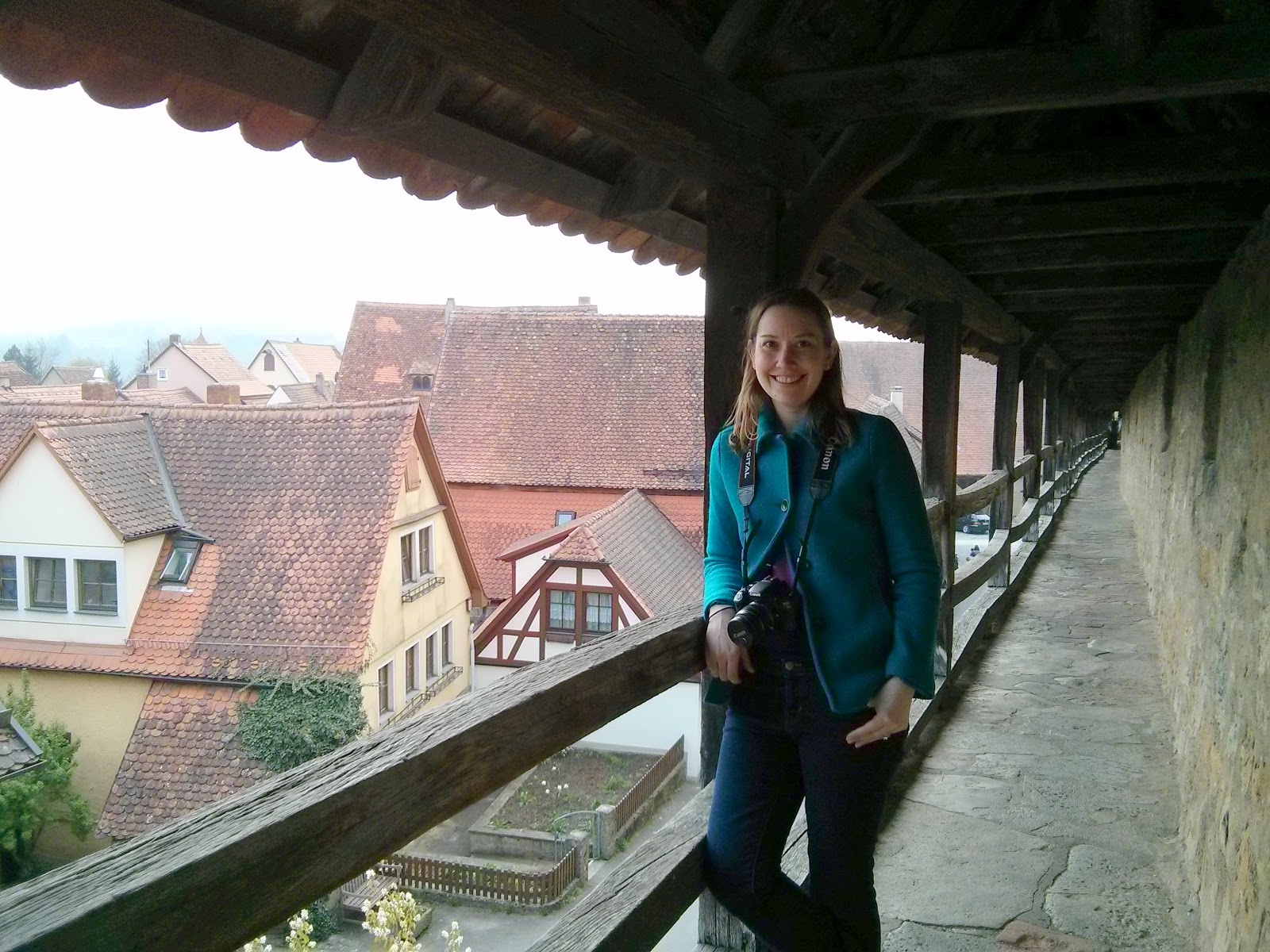 The views into the city from the wall were great (especially for anyone that skips the Town Hall spire). 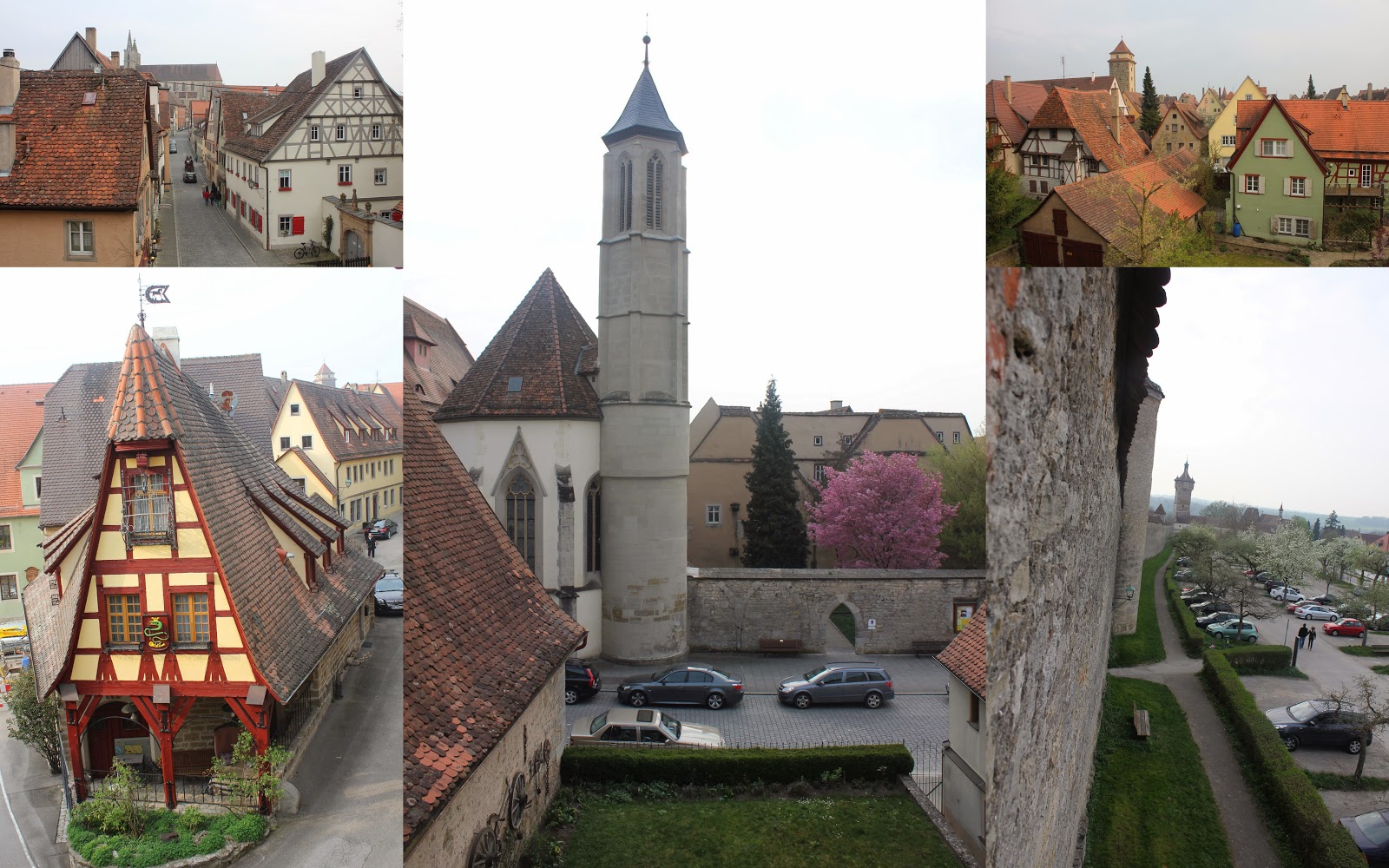 We finished up our wall tour with a stop at the Castle Garden.  The castle is long gone (destroyed in a 14th century earthquake), but the garden remains.

After a tasty dinner at Hotel Restaurant Kloster-Stuble (the first white asparagus of the season), we headed off to the highly-recommended night watchman's tour.  The night watchman takes you around the city and gives you a bit of this historical flavor.  Most of the information was in our guidebook, but it is so much better when it comes from a guy with a cape, big lantern, and a great sense of humor. 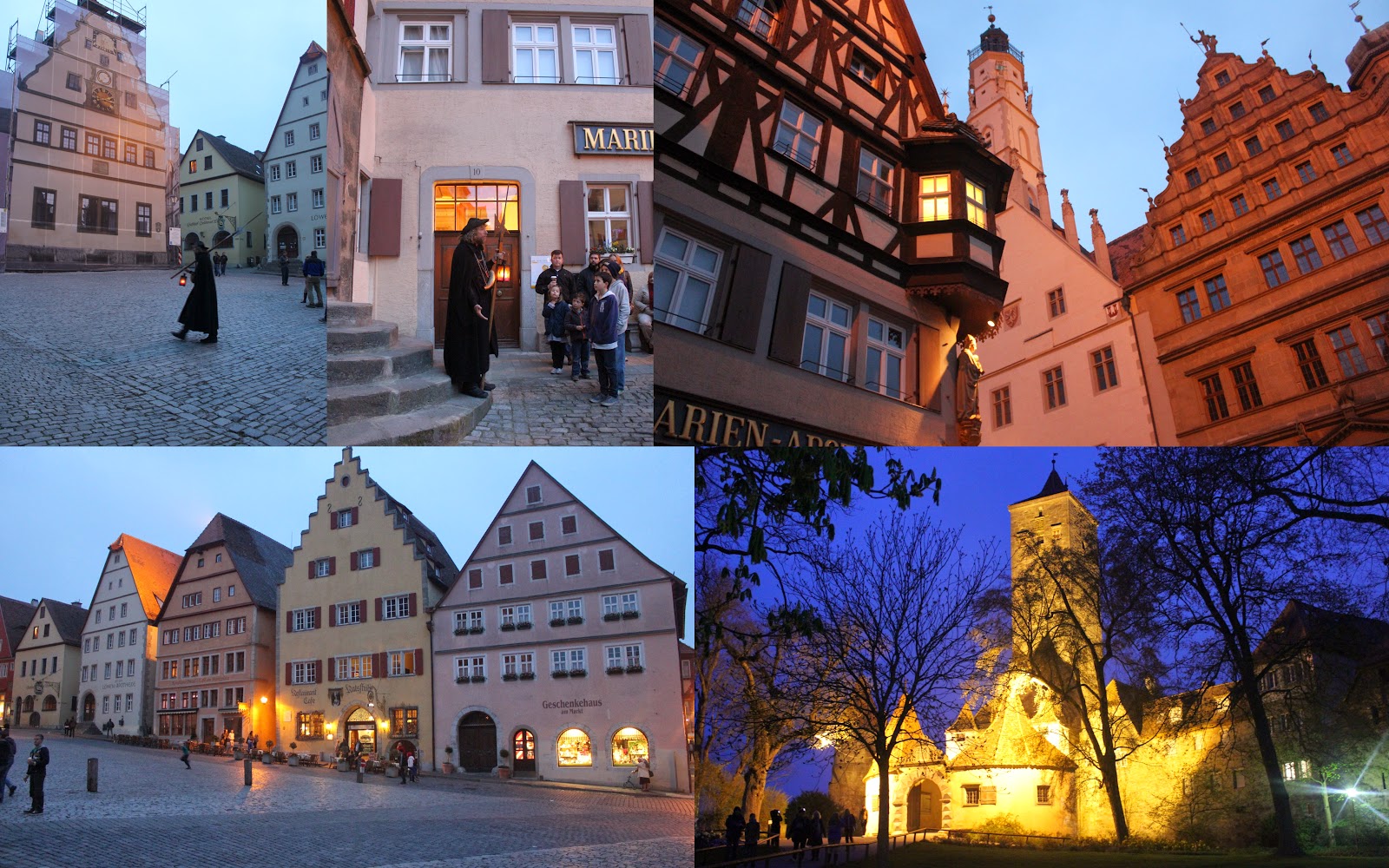 We definitely enjoyed our day trip and are excited to show visitors these magical places as well (just not during July or August ... this place must be a zoo).
Posted by Kristin Hendren at 11:00 PM