Kristin had a work event in London, so we decided to use the opportunity to spend the weekend with our version of British royalty -- Arden and Sunil.  They moved to London recently, so we were excited to take them up on their fabulous hospitality (i.e., tell them we were coming to stay without any real option for them to say no).

Their place is in a great location -- we just hopped on a quick flight from Stuttgart to London Stansted and from there it was a direct train to Liverpool Station (and Arden and Sunil's couch). 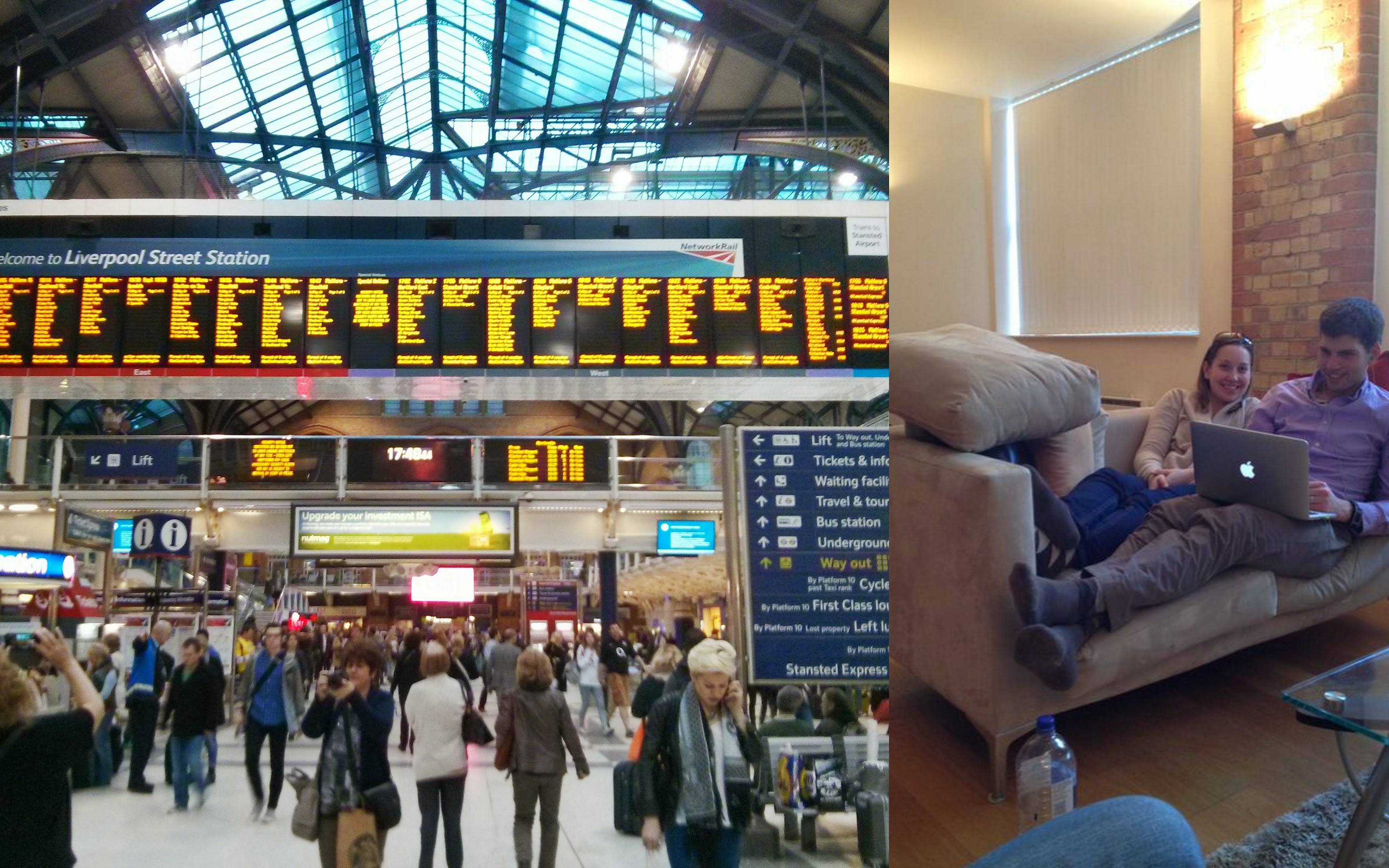 The weather was nearly perfect...especially for March.  Kristin's dinner was at a very beautiful space close to Westminster, so it made for an amazing walk from the Tube (in high heals and a long dress).  And some goofy fancy-dress pictures of Kristin.

The next day, Arden and Kristin went looking for lunch.  About 5 miles later they had some fun pictures.  And some mediocre burritos.  But the walk was great.  It was bright and sunny.  Amazing.

On Friday, we spent a few hours wandering through the collections at the British Museum.  There was a list of "can't miss items," so naturally we found all of them and got good pictures of the incredible stuff the British "borrowed" (and never returned) from other cultures. Our favorite part was the friezes and statues from the Parthenon.  It's pretty terrible that they aren't actually at the Parthenon, but it was amazing to see them up close and so well protected.  It made us excited to see the building itself in Athens. 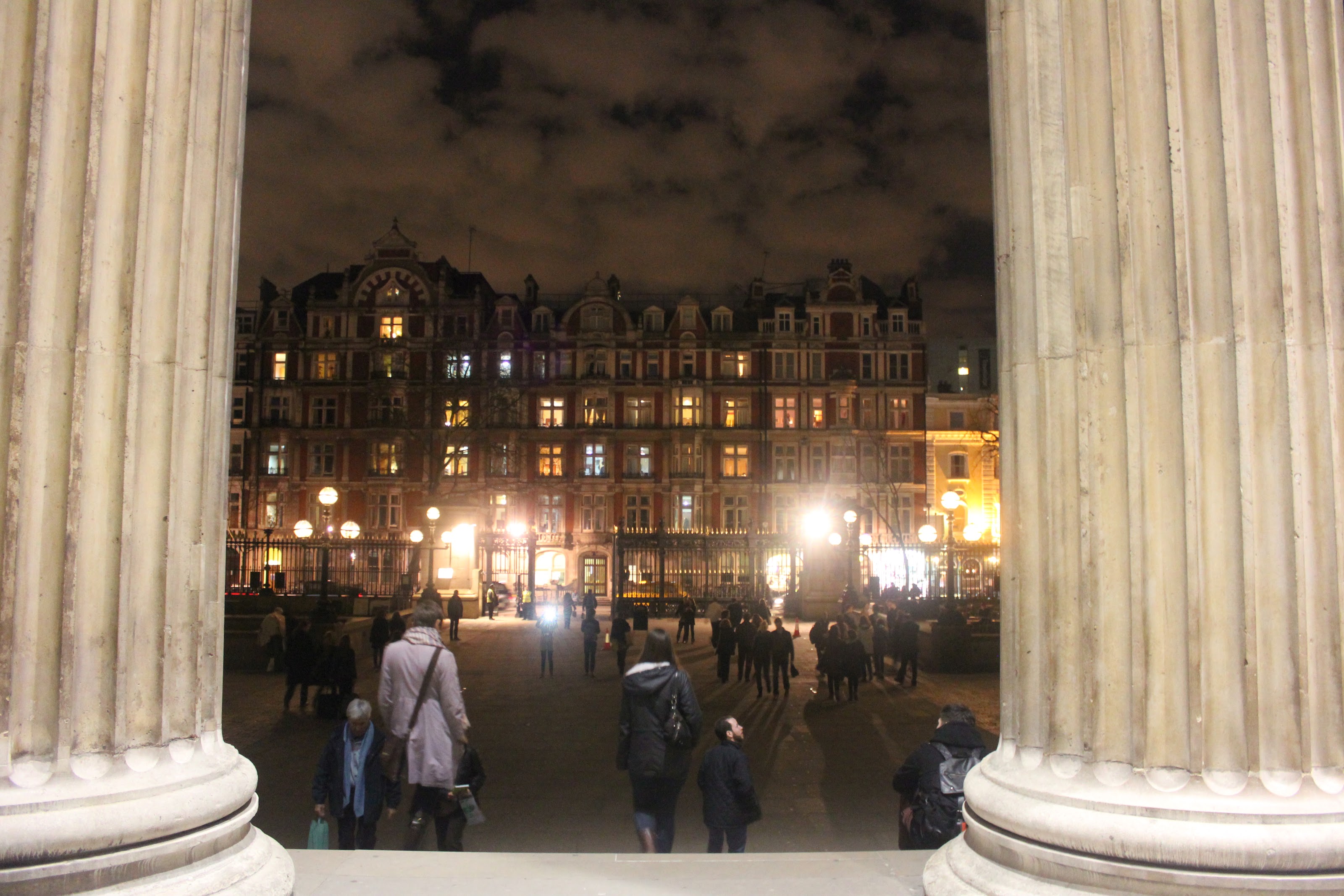 The next morning we went for a jog that hit some of the big London sites -- the Tower of London, London Bridge, the Eye, Big Ben, Buckingham Palace, and Kensington Palace.


We had an awesome lunch at a cute place near Arden and Sunil's house called Poppies Fish & Chips. There were huge portions and lots of fried food deliciousness.


On Sunday, we went to the Brick Lane market close to their house.  It was an amazing day, so there were tons of people enjoying the great weather and the even better food.  It was nice to have a relaxing day just to enjoy a typical London weekend.  Matt managed to have lunches from three different ethnicities (Sri Lankan, Guatemalan, and Malaysian). Thanks to Arden and Sunil for being awesome hosts for us.  We can't wait to get back!

Posted by Kristin Hendren at 1:03 PM No comments:

Kristin and I had so much fun in Lech that we decided to go skiing again a few weeks later.  Along with two of my coworkers, we toyed with the idea of going with the local ski club but in the end decided to find our own way.

Friday morning we loaded up the car and headed south past the Zugspitze (the highest mountain in Germany) into Austria, arriving at our destination just in time for the discount lift tickets at 11am.  We chose to start at Lermoos, a small and relaxed ski hill (map) with some good snow and a casual atmosphere that was a great balance to the see-and-be-seen area around Lech during our first European skiing experience.  The weather also provided a good dichotomy to what we had last time -- this time it was a beautifully warm and sunny spring day.

Less than fifty wobbly ski boot steps from where we parked, we bought lift tickets and loaded onto one of the gondolas, which are much more common here than what we're used to in Colorado (3/9 lifts here were gondolas).  It took us up up up and over a few ridges to where there was still snow. ﻿
﻿
﻿﻿Being a weekday on a small ski hill in the spring, there were never lines or crowds and the skiing wasn't nearly as intimidating as Lech, which seemed chock full of professionals.
﻿﻿ 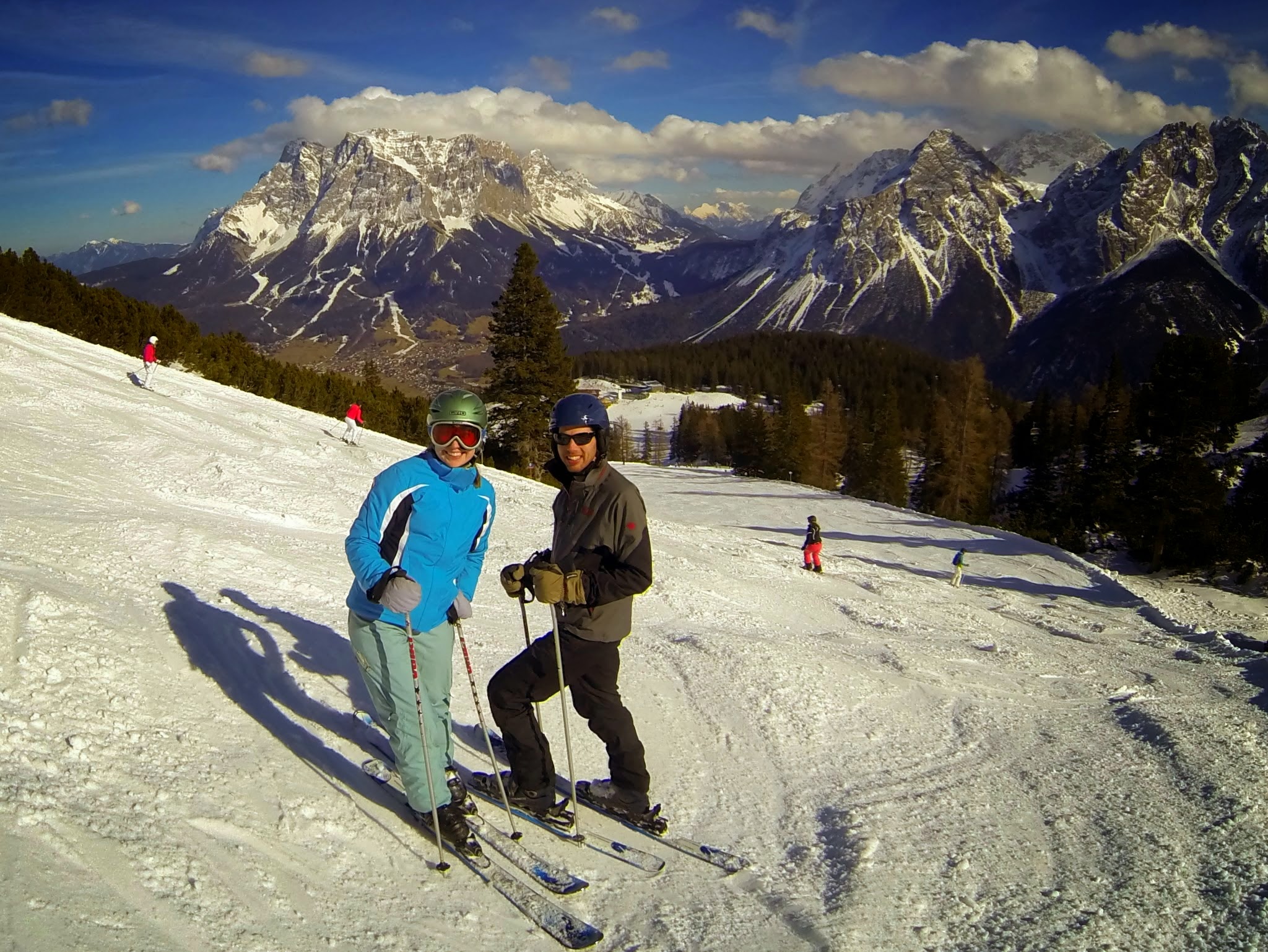 After several hours of exploring the mountain, we decided to take a break and relax in the sun.
﻿
﻿
﻿﻿
﻿
The following day we got up early and were ready for some serious skiing down at Ischgl.  Officially known as Silvretta Arena Ischgl-Samnaun, it's the largest ski area in the Alps and spreads across Austria and Switzerland (map).  It was an incredible place, full of wonderfully groomed piste (aka trail) that included great snow.

Switzerland is not a part of the European Union and does not use the Euro so lunch on that side is in Swiss Francs and is guaranteed to be more expensive.  The cool part is EU citizens can ski over and shop in duty free stores and then ski back.  We were there to ski and not shop so we just hit up a restaurant that looked good.  I love all of the on-mountain options for eating and drinking...in Colorado you're always reminded it's one corporation that owns everything on and around the mountain.

After several more hours of skiing, the clouds started rolling in, full of more snow.  By the time our legs were getting tired, the snow was coming down pretty hard so we jumped on the gondola and took the easy way down after one of the best days of skiing I've ever had.
We stayed in Garmisch-Partenkirchen, Germany and it lived up to its reputation of being a cute Bavarian town at the base of its own ski mountain.  Fortunately or unfortunately it was very foggy Sunday morning so instead of more skiing, we had a big breakfast and then did lots of sightseeing the whole way home to Stuttgart.
﻿ ﻿﻿ ﻿﻿﻿ ﻿﻿
We took the scenic route through lots of amazing little towns.  Bavaria is the German state next to the one Stuttgart is in (Baden-Württemberg) and it embodies everything Americans think of when they think of (west) Germany...rolling hills, nice people, biergartens, lederhosen. 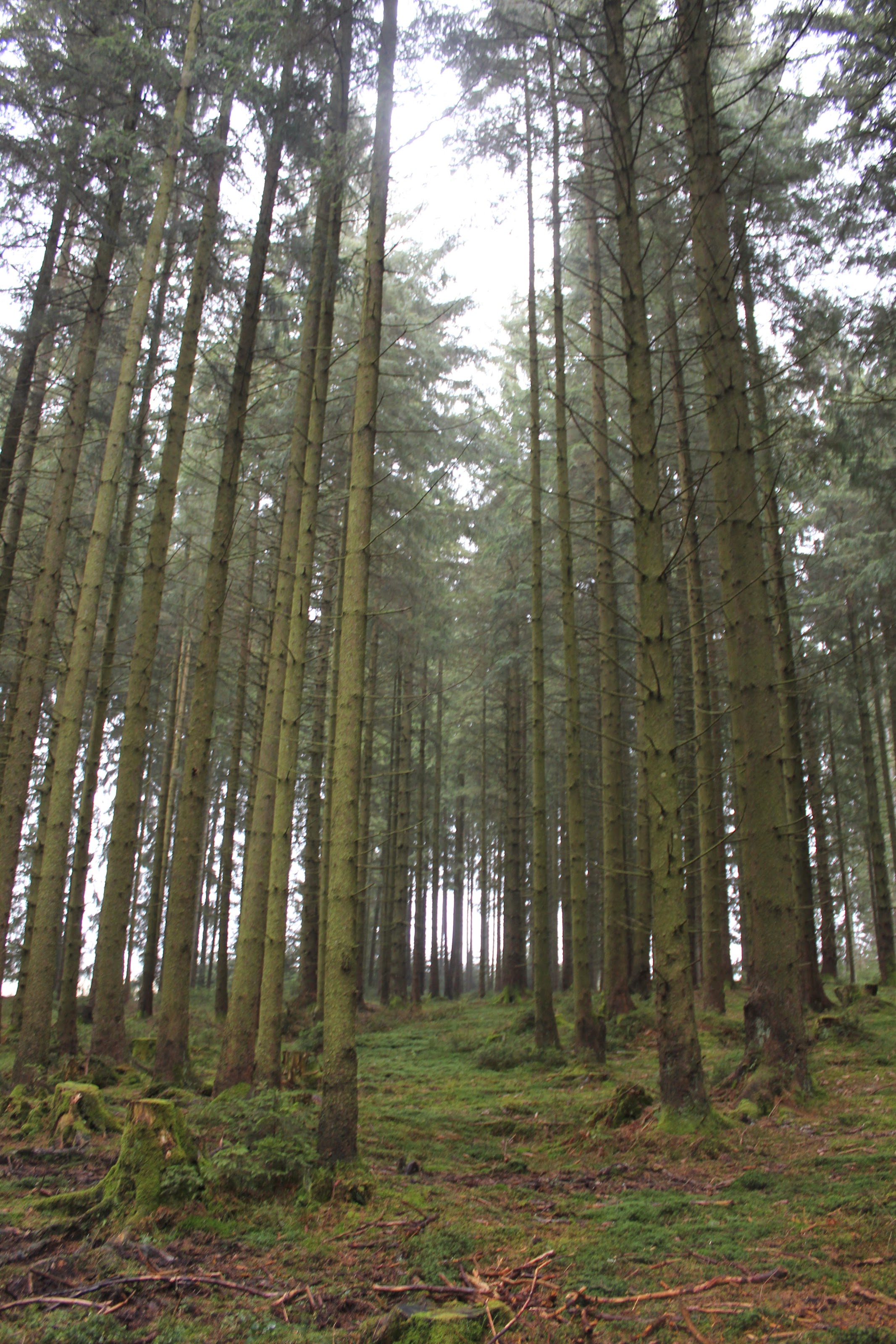 All week Kristin had been looking forward to seeing Neuschwanstein Castle, the castle that Walt Disney based Sleeping Beauty's and Cinderella's on.  It was built in the late 1800s by the artistic and possibly insane Ludwig II, but he died less than a year after it was complete.  Since then it has been open to the (paying) public because it's such a fabulous structure.  On clear days you can see the bright white castle amongst the Alpine foothills and the beautiful valley below. Unfortunately, all of southern Germany was caught in the fog so we got a different look at it.
﻿ ﻿
To get to the castle, you have to climb or take a horse drawn cart up a steep hill through the forest so you can't see much of the castle until you're right next to it.
﻿ ﻿﻿ ﻿
Luckily there's a 15 minute hike that takes you up the valley a bit more and then, from a precarious bridge over a river far below, you (and lots of others) can appreciate a full view of the castle. 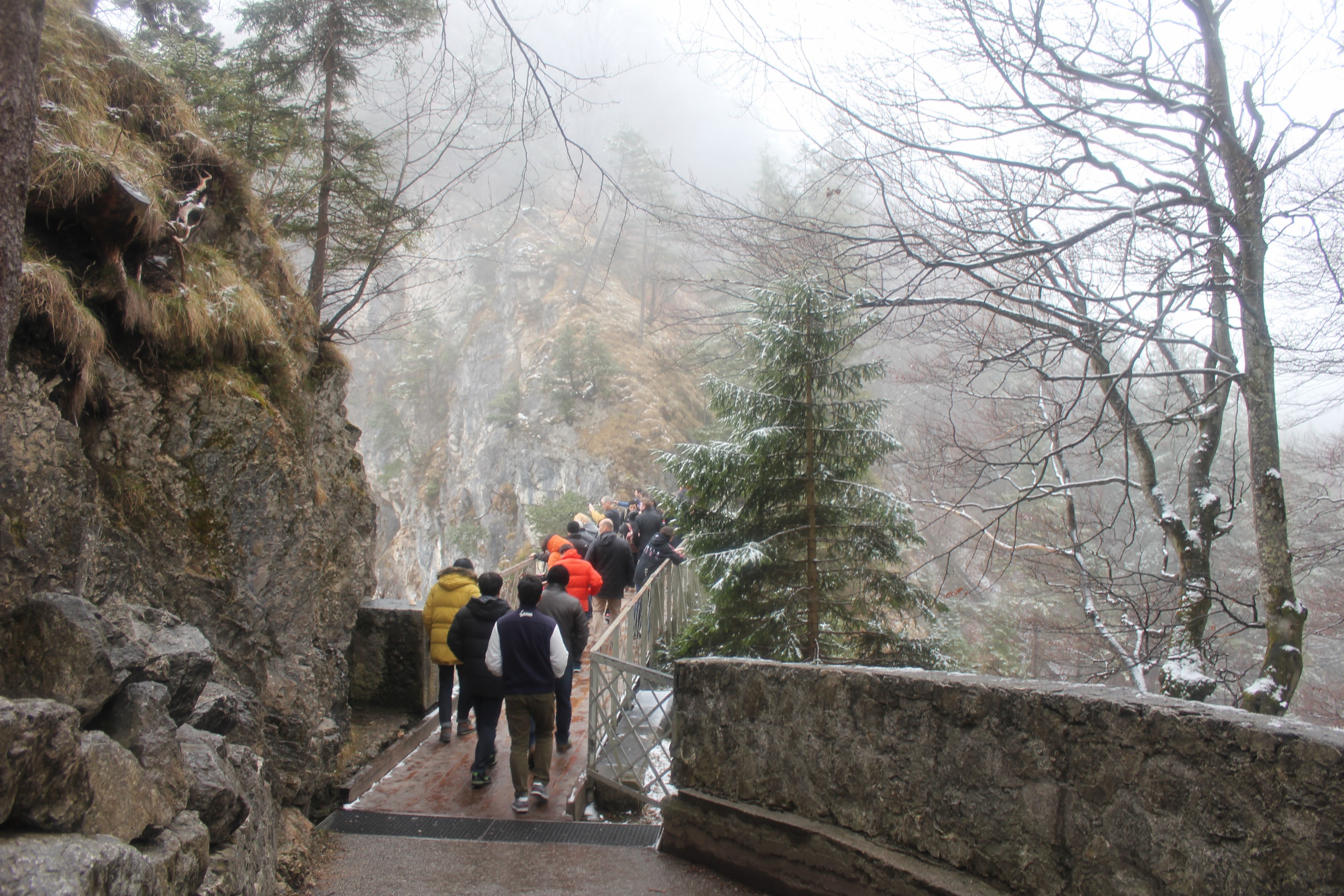 Whew, I hope you liked the pictures.  We are so happy to have all of this within a 3 hour drive and look forward to seeing it again when friends and family come to visit!
Posted by matthendren at 10:25 PM No comments: